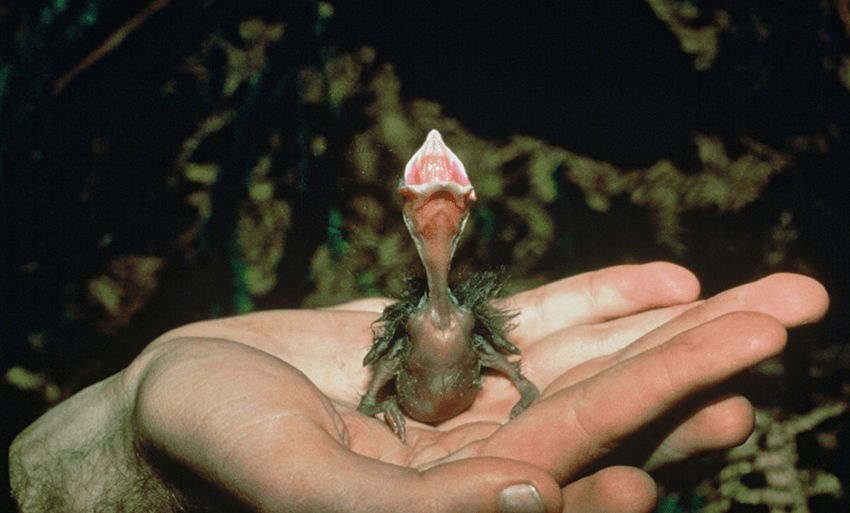 The survival of many of NZ’s endemic species, such as this North Island kōkākō chick, rests in our hands. (Department of Conservation).

Why the survival of NZ’s wildlife is in our hands

By Nicola Toki
Guest writer
Made possible by

The survival of many of NZ’s endemic species, such as this North Island kōkākō chick, rests in our hands. (Department of Conservation).

The idea that New Zealand’s threatened species can somehow safely ‘co-exist’ with the onslaught of introduced predators is irresponsible and untrue, writes the Department of Conservation’s Nicola Toki.

New Zealand is facing a biodiversity crisis. With more than 4000 species in trouble, some scientists have given us the dubious honour of the country with the highest proportion of threatened species in the world.

New Zealand’s endemic fauna has evolved in a predatory mammal-free bubble for millions of years. In general, our native wildlife’s predators came from the air. That is why our birds (and some of our invertebrates) grew large and fat, nested on the ground and some even eventually lost the power of flight. All they had to do to avoid a predator was stay very still and blend in with their surroundings. Once people arrived here, we turned on a conveyor belt of introduced mammals starting with kiore and kuri, then stoats, ferrets, weasels, possums, rats, cats, mice, hedgehogs and more.  Our naïve native species were simply sitting ducks for these new predators.

The idea that we have a reasonable choice, that our threatened species can somehow safely ‘co-exist’ with the onslaught of introduced predators is irresponsible and untrue. Tell that to the tuatara, which disappeared from mainland New Zealand around the time that rats arrived here (luckily for them, some survived on offshore islands). Tell that to the greater short-tailed bat, which was wiped off the planet when a rat plague occurred at Big South Cape Island near Stewart Island in the 1960s. Tell that to the kea, which suffers losses of up to 60% of all nests in areas with no pest control, and this can rise to 95% nest loss following a beech mast. Tell that to the kiwi, which are intensively managed through Operation Nest Egg (egg removal and raising chicks in safe environments until they’re deemed big enough to defend themselves).

Without intensive management, 19 out of 20 North Island brown kiwi chicks do not survive until one year of age and for the diminutive little-spotted kiwi, even the adults are too small to withstand a stoat attack. At a loss of 2% per year for unmanaged kiwi, our national bird could go extinct in the wild in just two generations without serious interventions and removal of predators wherever possible.

Biodiversity beyond the fence

Predator-free sanctuaries are essential for the ongoing survival of many of our native species, including invertebrates and reptiles and amphibians. What’s exciting is what comes after that. We can do so much more for our wildlife than to relegate species to living behind fences or in designated areas somewhere away from us out in the bush. We need only look to our neighbours in Australia, who have learned to live with flocks of cockatoos smattered across their towns and cities, and fruit bats migrating across the skies each night. Why shouldn’t New Zealanders aspire to having flourishing native wildlife in our backyards, farms and cities?

Unlike other big environmental issues, the recipe for enhancing the survival of much of New Zealand’s native wildlife is relatively simple – remove the pests and protect habitat. That’s why our predator-free islands once again boast a deafening dawn chorus.  The opportunity to protect and restore some habitat, learn about local ecology and work with our local communities to improve things for nature give us hope and pride.

The idea of communities being engaged in protecting their native wildlife is one that has caught on all over the country. Someone suggested to me last week that there may be as many as 1000 trapping groups in the Auckland region alone. Wellington has created their own umbrella group to wrap around the hundreds of trapping groups there. The Department of Conservation has nominated a team of rangers around the country to support these groups with advice and information. Why wouldn’t we encourage and support this – with the best advice we can muster of course, and always with welfare issues in mind?

Our nature is who we are

New Zealanders are quite simply defined by our natural environment, in particular our native flora and fauna. The late conservationist Don Merton, internationally renowned for his and his team’s efforts to save the black robin and the kākāpō from imminent extinction, once put it like this:

“They are our national monuments. They are our Tower of London, our Arc de Triomphe, our pyramids. We don’t have this ancient architecture that we can be proud of and swoon over in wonder, but what we do have is something that is far, far older than that. No one else has kiwi, no one else has kākāpō. They have been around for millions of years, if not thousands of millions of years. And once they are gone, they are gone forever. And it’s up to us to make sure they never die out.”

It is up to us to make sure that happens, and from the view of the Department of Conservation, iwi, businesses, communities and countless individuals engaged in protecting our precious native taonga on a daily basis, it is a responsibility that we hold dear to our hearts.

Nicola Toki is the threatened species ambassador for the Department of Conservation.