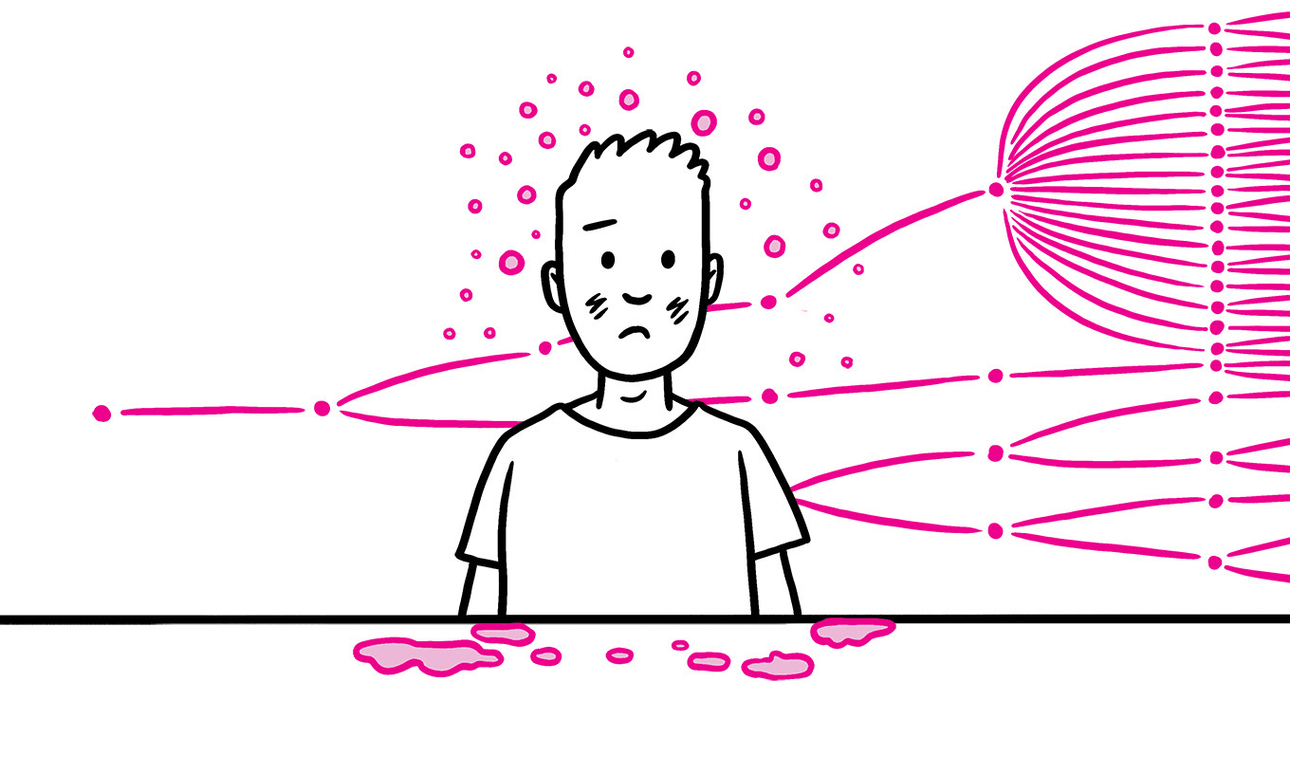 Our understanding of the way Covid-19 is transmitted from person to person has changed a lot since the pandemic began. A year in, here’s what we now know.

It’s just over a year since the World Health Organisation (WHO) raised its highest alarm over Covid-19, declaring it a public health emergency of international concern (PHEIC). The virus and disease didn’t even have a name at that stage, it was just referred to as the “novel coronavirus”. Almost all the known cases of the virus were in China but human to human transmission had also been detected in Germany, Japan, the USA and Vietnam.

The evidence at the time, and a whole lot of dogma around the transmission of respiratory diseases, was consistent with the virus being spread by droplets from people with respiratory symptoms. But a year later, after over 100 million confirmed cases and 2 million confirmed deaths, we now know that our earlier understanding was wrong.

So, here’s what the evidence is telling us at the moment about how the SARS-CoV-2 virus spreads between people. A word of caution though: as new variants of the virus evolve this information may well change again.

When are people infectious?

People with Covid-19 are infectious for a few days before they have symptoms and then for a week or so after their symptoms start. Those few days before symptoms start are the danger days because people who are infectious are going about their daily lives not knowing they may be spreading the virus. That’s one of the things that makes this virus so tricky. It’s why it’s so important for us to keep track of our movements and who we’ve been with, even when we feel perfectly fine.

It’s also why we should get advice about getting tested as soon as any symptoms develop. (Check out our handy symptoms chart here if you need a reminder). Once symptoms start, countries that are using the test-trace-isolate strategy to minimise community transmission have a small window of opportunity to identify people who are incubating the virus but not yet infectious. Getting them into isolation helps break the chain of transmission.

It’s worth pointing out that there is still uncertainty about whether people who never develop symptoms are infectious.

How does the virus spread?

At the moment there seem to be three main ways the virus spreads. The first is through close physical contact with someone with the virus. That’s why we asked people to hold off on the handshakes, hugs, and hongi last year. The second way is through touching contaminated surfaces. This was thought to be a really important form of transmission a year ago, but we now know it’s much less common. That doesn’t mean you should stop washing your hands though!

The third and probably most important way the virus transmits is through the air. A new study by Parham Azimi and colleagues from Harvard TH Chan School of Public Health and the Illinois Institute of Technology suggests that airborne transmission likely accounted for more than half of the transmission in the outbreak that happened on the Diamond Princess cruise ship. We’ve also had the recent studies showing how transmission can happen through ventilation and drainage pipes and on planes.

There is still a lot of uncertainty around exactly how long the virus hangs around for in the air and how long someone needs to be exposed for to get infected. We may get some clues from the few cases of transmission that have happened in managed isolation facilities in countries like New Zealand and Australia, or from those countries that are doing good contact tracing of at least some of their cases.

The dynamic nature of transmission

Most people have probably heard of the R0 by now. It’s a measure of how infectious a microbe is. An organism with an R0 of two results in roughly two new cases for every case. The R0 for Covid-19 has been put at between two and three, though this may well increase with the new more transmissible variants of the virus that are evolving.

While the R0 is a useful measure if you’re an epidemiologist, it may not actually reflect what’s happening in real life. You’ve probably heard of Pareto principle even if you don’t recognise the name. Its more commonly known as the 80/20 rule. You know the one. You’ll spend 20% of your time doing 80% of a thing, and then the remaining 80% of your time doing the last 20%. That’s basically a good way of describing how Covid-19 transmits.

Quite a few studies have found that most people will only infect one or two other people, or maybe even no one else. Like this one describing the introduction of the Covid-19 into New Zealand at the start of the pandemic. Or this one from Hong Kong. A small number of cases though will result in tens, or even hundreds, of other cases. It’s not clear if the people involved are actually shedding more virus than normal. What is clear is that where a case has resulted in lots of other cases, it’s usually been under conditions where there are lots of people, usually together in a crowded or badly ventilated space, and where there is either lots of close contact or people are talking loudly, singing, and/or shouting. We call these super-spreading events. That’s why limiting gathering sizes and indoor dining and events, as well as recommending people wear masks, help reduce the spread of Covid-19.

We’ve learned so much about Covid-19 since the pandemic started, and as the evidence has changed, so has the advice of the experts. What we know now is that we are dealing with a tricky and dangerous virus that spreads through close contact, contaminated surfaces, and the air. Unfortunately, people are infectious before they know they have Covid-19 which makes controlling transmission tricky but not impossible – as many countries including New Zealand have shown. With the emergence of new variants of the virus, it’s important we remember that, and make a global effort to bring Covid-19 under control.