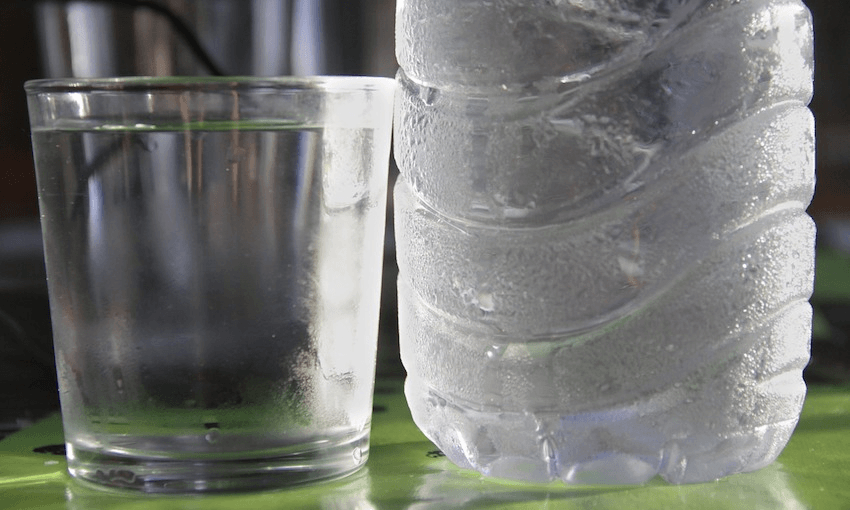 By Alison Campbell
Guest writer
Made possible by

Forget bottled water – the new ‘health’ craze for those who reject tap water is raw, untreated water from rivers and springs. New Zealanders shouldn’t need to be told what a terrible idea that is, writes biological scientist Dr Alison Campbell.

‘Raw water’ is the latest foolish fad to hit people’s screens, pockets – and, in some instances, I’d guess their toilet paper expenditure as well.

I first heard of this particular litre of woo when I read an article in the New York Times with the headline Unfiltered Fervor: the rush to get off the water grid. Apparently getting ‘off the water grid’ is becoming a thing in parts of the US, and various companies are both encouraging and cashing in on this fad. Thus, in a San Francisco grocery store, you can buy “glass orbs containing 2.5 gallons of what is billed as “raw water” — unfiltered, untreated, unsterilized spring water, $36.99 each and $14.99 per refill” which is claimed to have “a vaguely mild sweetness, a nice smooth mouth feel, nothing that overwhelms the flavor profile”.

Somehow that reminded me of some of the statements made by connoisseurs of fine wine, and maybe that’s the market that they’re aiming for. And, according to the NYT, the lack of both chlorination and fluoridation are selling points, along with the ability to buy (in select water stores) a “mineral electrolyte alkaline” water. Apparently the proponents of drinking untreated water believe that not only that filtration removes useful minerals, but that the treatments widely used to provide safe drinking water (like chlorination, UV light or ozone) “kills healthful bacteria — ‘probiotics’ in raw-water parlance.”

One even goes so far as to claim that “real water” should expire after a few months.

Luckily, his does. “‘It stays most fresh within one lunar cycle of delivery. If it sits around too long, it’ll turn green. People don’t even realize that because all their water’s dead, so they never see it turn green.'”

Mind you, this particular individual also believes that tap water is poisoned by the process of chlorination, that it contains birth control drugs, and that the fluoride added as a community dental health measure in many water supplies is a mind-control drug…

Sad to say, history, microbiology and recent events all suggest that at some point there will be an outbreak of water-borne disease in a community where the practice of drinking raw water unprocessed water is common. (Apparently some believe that the term ‘raw water’ carries connotations of sewage. Who’d have thought it?)

There are reasons why, in the developed world, most communities* use some form of water treatment, reasons that can be traced back to John Snow’s recognition that cholera is spread via contaminated public water supplies and Pasteur and Koch’s demonstration of the germ theory of disease – ie, that diseases are often the result of microbial infection.

Here in New Zealand those potentially water-borne diseases include nasties like campylobacter, giardia and cryptosporidium, but Shiga-toxin producing E. coli can also be spread via contaminated water. Internationally you can add others to the list, including cholera (which is currently adding to the misery in Yemen) and amoebic dysentery – and one of the impacts of climate change could be an increased health burden from such diseases, particularly in developing countries. And of course, here in New Zealand we should be all too well aware of what happens when an untreated water supply becomes contaminated, resulting in campylobacteriosis in 5,500 of 14,000-strong population of Havelock North.

We have drinking water standards for a reason. I guess those who prefer to ignore the lessons of the past will, eventually, find that out the hard way. (Those wanting a more extensive commentary should read this wide-ranging article by David Gorski on the Science-Based Medicine site.)

* Yes, I’m aware that individuals can choose to take rainwater off the roof – or have to do this by necessity. Hopefully they also use a good filter, given that birds are not particularly fussy over where they defecate. Or where they die.

Dr Alison Campbell is the associate dean of teaching and learning and senior lecturer in biological sciences at the University of Waikato. This article first appeared on her own blog, sci.waikato.ac.nz/bioblog.