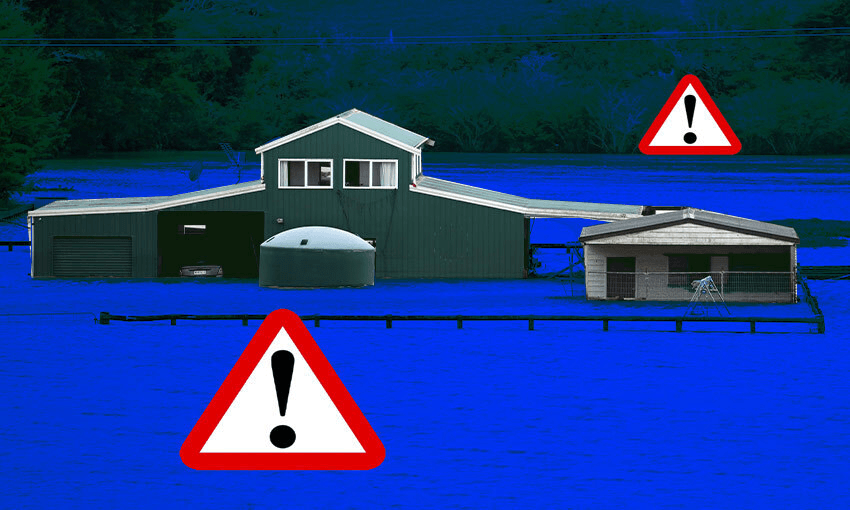 Why did we not see the Auckland floods coming?

Was the sheer intensity of torrential rainfall that flooded parts of Auckland last week just too difficult to predict? Paul Gorman asks the people on the front line of forecasting.

When the heavens opened above West and North Auckland last Monday night, where was the official warning from MetService that it might happen? A lower-tier severe weather “watch” for heavy rain had been issued, along with advice that thunderstorms could bring downpours in places, but to the surprise of some no warning was released until the following morning.

Huge amounts of rain fell from about 6pm that night – up to 150mm of rain pelted down in Henderson and parts of the Waitākere Ranges in just 18 hours. It resulted in severe flooding for thousands of homes and roads, and prompted rescue missions for stranded stock and endangered residents. The Auckland Council is still assessing more than 5000 homes for damage in the worst affected areas of the Henderson Valley, Ranui, Kumeū and Waimauku.

The question remains, did MetService – which did such a good job warning Cantabrians of flooding rains at the end of May – actually let Aucklanders down? Or was this such a maverick event that even sophisticated computer models forecasters rely on were struggling to interpret what was happening?

As weather events become more extreme due to climate change, with a warmer atmosphere able to hold more moisture and then release it, it’s understandable that we might demand ever-more accurate weather forecasts. However, the West Auckland floods are a reminder that, despite the most advanced technology at forecasters’ fingertips, in our complex neck of the woods weather forecasts will never be 100% accurate. Forecasts will always be predictions about the future and not observations of what is actually happening.

In this case, it appears there was another factor at play – the strict definitions of what does and does not comprise a severe weather warning-worthy event. Under the Meteorological Services Act of 1990, MetService is the state-owned enterprise with sole responsibility for issuing severe weather warnings for heavy rain, heavy snow, severe gales and severe thunderstorms.

Two years ago, MetService refined its warning system to introduce orange warnings for weather with the potential to affect people, animals and property, and red warnings for life-threatening events, when extreme disruption is likely and “immediate action” needs to be taken to protect life.

Lisa Murray, head of weather communications for MetService, told The Spinoff that Auckland’s forecast last Monday morning read: “Rain, with possible thunderstorms and localised downpours.” The thunderstorm outlook that morning, valid till midnight, predicted a moderate risk of storms and heavy rain, and a low risk of downpours of 25mm to 40mm of rain an hour.

A severe weather watch had also been issued which said a band of heavy rain would lie slow-moving over Auckland until Tuesday afternoon. However, there was “some uncertainty as to exactly where the heaviest rain will fall, but rainfall amounts may approach warning criteria in the vicinity of this rain band,” says Murray.

“Additionally, direct advice was provided to Auckland Council CDEM and to NEMA ahead of the event also on Monday morning, conveying the uncertainty where the rain band would stall and the heaviest rainfall would occur.”

In the evening, the moderate risk of thunderstorms and downpours for northern Auckland was extended for overnight and the following morning. Murray says what stopped MetService from issuing a full-scale, orange, severe weather warning that day was forecasters not being confident enough conditions would meet the official warning criteria.

According to MetService’s website, for a heavy rain warning, rainfall across 1000 square kilometres or more has to exceed 50mm within six hours or 100mm within 24 hours. The trouble is, while the amount of rain was well in that range, those quantities were not expected across the whole of Auckland, which has an area of about 1000 square kilometres, depending on which figures you use. Forecasters realised the situation was a broad-scale rain event within which there was the potential for localised thunderstorms.

A huge thanks to our volunteer surf lifeguards from Muriwai and Mairangi Bay, some of whom have been up since 5:30am helping those affected by the floods. So far 10 people have been rescued and 35+ assisted, as well as quite a few cats, dogs and other animals!🚨❤️💛 @SLSNZ pic.twitter.com/uMl1kRuBM2

Murray says the many models considered by MetService meteorologists were inconsistent on the “where” and “how much”. “While thunderstorms can have downpours, it was difficult to forecast the exact location and duration of this event, and as such [it was] decided that a severe weather watch for heavy rain was the course to take,” she says.

“MetService only issue warnings when warning criteria are met and there is high confidence of the event happening, so the uncertainty in this event was the main contributing fact to a watch rather than a warning being issued.”

The hit-and-miss nature of the heavy rain was reflected in Auckland Airport only receiving 20mm in the same 24-hour period and the central city around 40mm.

It was only at 6.09am on Tuesday that a severe weather warning for heavy rain in Auckland was finally issued, due to the amount of extra rain expected adding to the impact that the previous night’s rain had caused, Murray says.

“The duty meteorologist would have rung the councils with the forecast amounts and the councils’ hydrologists assess the impact that amount of rain would have, also taking into consideration how high the rivers are already.

“Given the amount of rain that had already fallen and the ability for the areas to deal with more rainfall, the warning was issued for a further 60 to-90mm of rain.”

Crown research institute Niwa, which issues taxpayer-funded weather forecasts in competition with MetService, says its modelling underestimated the rainfall intensity. Niwa’s principal scientist for forecasting and media, Chris Brandolino, told The Spinoff its outlook for clients on Monday morning signalled a medium risk of thunderstorms later in the day.

“Niwa’s modelling, as well as external global modelling, did reasonably well with the placement of the rainfall, but none of the models accurately predicted the intensity. This is often the case with extreme rainfall events.”

So, were the forecasts wrong? MetService general manager of operations for science and innovation, Ramon Oosterkamp, says an “internal investigation … has revealed that all models – global and high-resolution local area, including our 1.5km model – underestimated the rainfall amounts, both hourly and cumulative.

“This was one of those rare events that was very hard to forecast correctly, and it is fair to say that the outcome of this event was worse than anticipated.”

Forecasters are now armed with a range of observations to help with “nowcasting”, Oosterkamp says. These observations from automatic weather stations, satellite and radar imagery are blended with rapidly updating models which provide guidance for forecasters and emergency managers from one to 24 hours ahead of a severe weather event.

As the official provider of severe weather information, MetService gets it right more than nine out of 10 times, he says. “When the weather doesn’t unfold as we expect, MetService reviews the event … to identify any improvements that can be made to ensure the public get the best information available.

“We can always do better.”