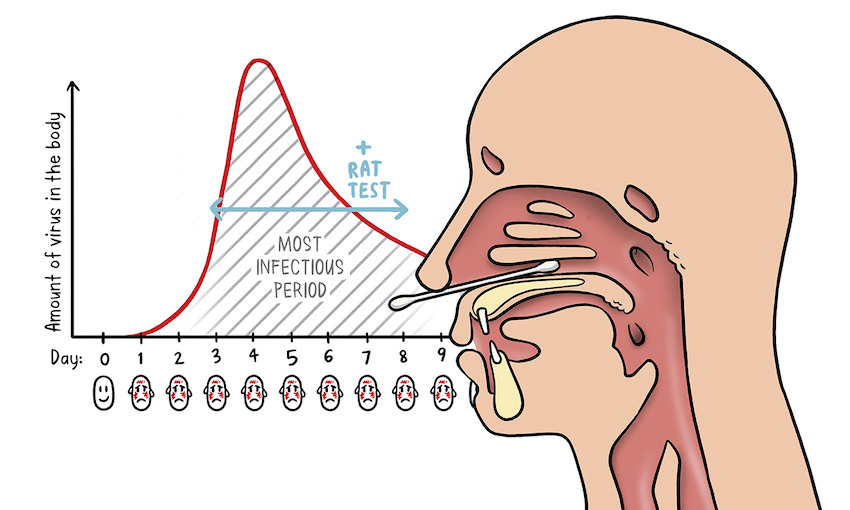 RATs can pick up a Covid infection when viral load is high. Illustration: Toby Morris

Siouxsie Wiles & Toby Morris: Feeling Covid-positive but your RAT is negative? Here’s why

RATs can pick up a Covid infection when viral load is high. Illustration: Toby Morris

A quick guide to why some people who return a negative rapid antigen test result may still be infected – and infectious.

The generous support of our members powers all of The Spinoff’s journalism, and keeps it free to all, without a paywall. Tautoko mai, join The Spinoff Members today.

I’m currently getting a lot of messages from people with Covid-like symptoms who are testing RAT-negative. Obviously, one reason could be that they don’t have Covid, rather some other lurgy instead. With our borders opening and new arrivals no longer having to isolate, we’ll be starting to get viruses like influenza coming into the country once again.

But there are several reasons why people with Covid-19 can return a negative RAT.

Before we get into that, a quick reminder: for most of the past two years, New Zealand has relied on PCR testing to identify people with Covid-19. PCR is a very sensitive technique that tests for the genetic material of the virus, which means it identifies people very early in infection when there are only a few virus particles around. While there are some rapid PCR testing devices, these usually only take a small number of samples at a time, so we’ve opted for sending samples to labs around the country to be processed. That does mean that depending on where you live, it can take anywhere from a few hours to a few days to get your result back.

We’ve also focused on using nasal swabs as the sample of choice. That’s despite the efforts of New Zealander abroad Dr Anne Wyllie in showing that saliva is a reliable alternative to nasal swabs. While using saliva does have some disadvantages, for many people it beats having a swab stuck up your nose, so means more people are likely to get tested.

As omicron started to spread in New Zealand, our PCR testing capacity soon maxed out and we’ve now switched to using rapid antigen tests – RATs – to identify people with Covid-19. The ones we’re using have been validated for swabs taken from a few centimetres inside the nose. Unlike PCR, which looks for the genetic material of the virus, RATs detect specific bits of the virus itself. These are the antigens. This means RATs aren’t as sensitive as PCR, so will pick up infectious people a few days after a PCR test would have done. That’s why it doesn’t make sense to use RATs when case numbers are low and PCR capacity high – people may end up with a false sense of security, thinking they don’t have Covid when they do.

But when case numbers are high, RATs make perfect sense. They are really quick to do – hence the “rapid”. The tests we’re using give an answer in 15-20 minutes. It’s really important that you don’t read the test after this time as the result will be unreliable.

RATs can also be done pretty much anywhere. That’s one of the disadvantages though: because most tests now aren’t being processed by our testing labs, we are reliant on everyone logging their test result with the Ministry of Health to give us an indication of our case numbers. We also need people to log their negative results, as that will help us keep an eye on the positivity rate, which can show us if we are testing widely enough to catch most cases. To log your result, go to the My Covid Record website or call 0800 222 478.

Below are some of the reasons why people with Covid-19 can return a negative RAT.

People might not be swabbing the right part of their nose. I’m not judging, have you seen what our noses look like from the inside?! Dr Eric Levi posted a great picture on Twitter that shows where the swab needs to go, which Toby Morris has adapted below. Levi is an otolaryngologist, a doctor whose specialty is the ears, nose and throat, so he knows what he’s talking about. Basically, your nose goes back, not up. So, push that swab low and slow to get it right.

There wasn’t enough virus in the sample

Let’s say that you’ve followed the instructions and are now an expert nose swabber. Why might you still test negative? As I explained earlier, RATs aren’t as sensitive as PCR tests so you can test negative if there isn’t enough virus around to detect. Normally we would expect people to have plenty of virus present once symptoms start. But for those of us who are vaccinated, especially if we are boosted, our symptoms will start earlier after we’ve been exposed because our immune system is able to recognise the virus much more quickly. It’ll also be working hard to get rid of the virus.

If you have symptoms, and you’ve tested negative, take another test a day later. Hopefully by this time there will be enough virus to detect.

Your nose isn’t the bit of you that’s infected

OK, so let’s say you’ve done several swabs and they are still negative. Congratulations! You may be one of the people who will only test positive through a throat swab or using a saliva sample. A recent study from researchers in South Africa compared paired nasal swabs and saliva samples by PCR and found that about one in 10 nasal samples tested negative for omicron when the corresponding saliva sample tested positive. It was different for delta, where about three in 10 of the saliva samples tested negative when the corresponding nasal sample tested positive.

(Yes, some people have tried swabbing their throat and then their nose with a nasal RAT, but as the swab won’t be designed for the throat, it can be hard to do.)

In conclusion, and I know this is an absolute pain, but just because you’ve tested negative doesn’t always mean you don’t have Covid-19. This is especially true if you have any of the hallmark symptoms like a scratchy throat, headache, fatigue, fever, or a change in/loss of your sense of taste and/or smell.

If this is you, and you are able to isolate, please do, as this will help reduce the spread of the virus, protect our family, friends and workmates, and keep our healthcare system functioning.