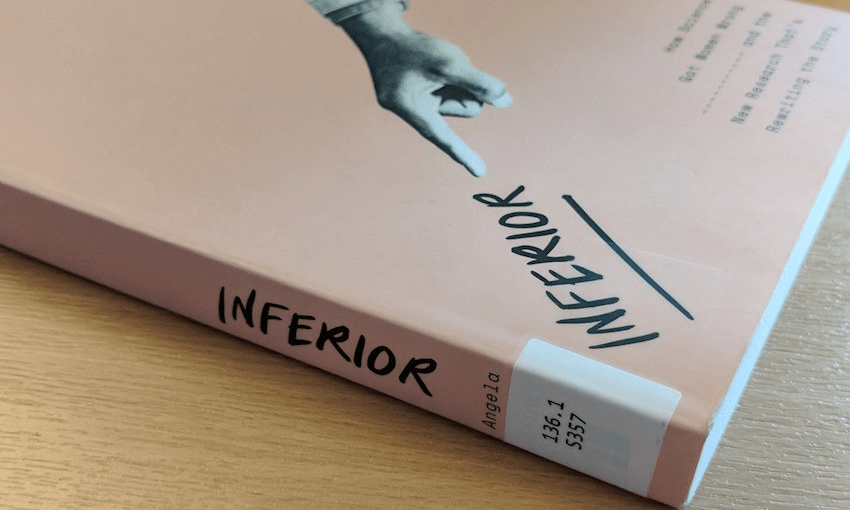 Angela Saini’s book Inferior will be making its way to schools across Aotearoa this year.

We got one book into every high school in NZ, and it might just change the world

Angela Saini’s book Inferior will be making its way to schools across Aotearoa this year.

Last year, I was tagged in a Twitter post by Dr Jess Wade. She was celebrating the success of a fundraising campaign that had raised more than $46,000 to get a copy of a specific book – Angela Saini’s Inferior – into every secondary school in the UK and Ireland. For Jess, reaching that goal was only the start. She issued a challenge to her friends – could we make the same thing happen elsewhere?

Inferior is a book that asks what science has gotten wrong about women. It is a thoroughly researched look at some of the most influential studies in psychology, biology and neuroscience. In it, Angela unpicks numerous stereotypes – eg women are better at multi-tasking, or men are naturally more promiscuous – and shows that they have no scientific basis. Despite this lack of evidence, such stereotypes continue to pervade modern society. And when it comes to science-related subjects, they can lead to the damaging – and incorrect – idea that women are less capable than men.

As a physicist and often the only woman in the room, this book was a breath of fresh air. I’d pored over it the first week it was published. And while it didn’t always make for comfortable reading, I was relieved to finally have evidence to challenge the biases I’d come across.

I was a science kid – I learned how to use basic tools at an early age, I did maths for fun, and my love of encyclopaedias was encouraged by my parents. Even so, by the time I reached secondary school, I’d started to doubt my abilities, and began to internalise the idea that I was weird for wanting to be a scientist. As one of just two girls in a large physics class, I worried that I was trying to excel at a subject that boys might just be better suited to. In the end, I got into my first choice of university with grades to spare, but I’d have put a lot less pressure on myself if I’d known that I wasn’t fighting against some “natural order”. That there was nothing in my biology that rendered me less capable than the dude sitting beside me.

So, getting Inferior into the hands of the next generation of Kiwi scientists felt like a worthwhile ambition. And thankfully, there were others who felt the same way.

One was Lilly Marie Taylor, a chemistry PhD student at the University of Canterbury. Lilly had taken a unique pathway into science, which made her a fantastic advocate for diversity. She took on the “education” part of the campaign, looking at term dates and finding out how many schools we’d need to reach. I took the “publishing” end of the effort. Angela introduced me to the team at Harper Collins, and we figured out the logistics of getting the books into schools, and finalising the overall cost – close to $8000. Superstar scientist Dr Siouxsie Wiles was next to join the team, alongside historian of science, Kate Hannah. Together we wrote the content for the fundraising page, and I set up an account on GiveALittle.

To be honest, that’s where things stayed for a while. Donations trickled in, but we were all too busy to give the campaign the attention it needed. And then I got some devastating news – our lovely friend Lilly had passed away. I couldn’t face pushing the campaign forward without her, so I took a break, with no real plan to come back to it.

As 2019 drew to a close, I found myself re-reading some of Lilly’s messages. Nestled amongst the science chat was her bubbling, infectious excitement for the campaign. So, I reopened the GiveALittle page, and shared the link on social media. This time, it gathered momentum – Jesse Mulligan kindly featured us on his radio show, and I chatted about it on B-Side Stories. The fundraising total began to rise, but to reach our lofty target, we knew we’d need to look beyond the generosity of individuals. With fingers firmly crossed, I emailed a few scientific institutions to ask for support, and headed off on my Christmas holiday.

Opening my inbox in January is rarely a happy experience, but this time was different. Brain Research New Zealand (BRNZ) – a national Centre of Research Excellence focused on the ageing brain – were offering to help. In fact, they wanted to become the major backer for the campaign, and get us to our goal.

BRNZ Co-Director Prof Cliff Abraham told me that they wanted to get involved “because every day in our clinics and labs, we see, first-hand, the extraordinary achievements of our female colleagues”. Co-Director Prof Peter Thorne added, “We hope that our support of this campaign will help maximise the interest and minimise the barriers to young women considering a career in science.”

Tomorrow is the UN’s International Day of Women and Girls in Science so it seems a very appropriate time to celebrate. Within the next few weeks, copies of Inferior will be winging their way to schools across Aotearoa. And it’s all been made possible by the generous NZ public and the support of the country’s best neuroscientists. We are so, so grateful to all of you. Thank you for helping us make a difference.

And Lilly, this is for you.