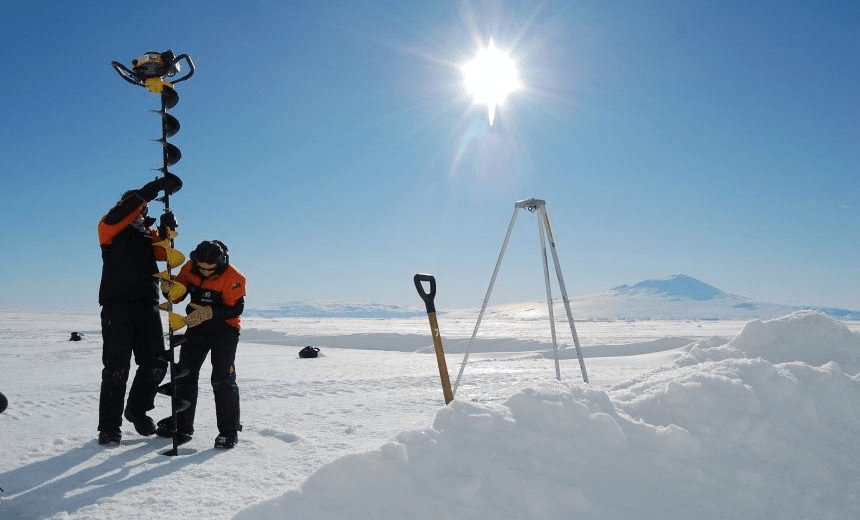 Antarctica’s great apron of sea ice just issued the world with a bold message. Now to work out what that message is

By Veronika Meduna
Guest writer
Made possible by

As New Zealand’s Scott Base celebrates 60 years of science on ice, Veronika Meduna looks at one of Antarctica’s most puzzling features – the wayward behaviour of sea ice around the continent.

Every southern winter, Antarctica doubles in size. As the sun sets on the continent, the surface of the ocean around it freezes, kicking off the world’s most spectacular seasonal transformation. By spring, this apron of ice begins to break up again and by this time of the year, it largely retreats back to the coast.

For nearly four decades, as long as satellites have been watching these growth-collapse cycles from space, Antarctica’s sea ice has, on average, been growing further out from the continent, bucking the trend of vanishing sea ice seen in the Arctic and baffling scientists. Then, this season, everything changed.

During September and October 2016, in the hottest year on record globally and in New Zealand, both poles showed record low levels of sea ice, with millions of square kilometres of ice missing when compared with historic average values. Even in the Arctic, which has lost 40 per cent of sea ice since the 1980s and where this most recent development could be understood as an acceleration of an existing trend, the degree of sea ice loss is troubling scientists. In Antarctica, which saw a 4 per cent growth of sea ice up until 2014, this is exceptional.

James Renwick, a climate scientist at Victoria University in Wellington, has been tracking sea ice data released in the Sea Ice Index, published by the US-based National Snow and Ice Data Centre.

The main factor, he says, was a change in large-scale atmospheric circulations. The belt of westerly winds which usually whips around Antarctica has moved northwards and weakened during the past few months, “meandering like a river”. It brought warmer air into higher latitudes in some parts of Antarctica, melting the sea ice quicker and sooner. The loss of sea ice is not universal along the Antarctic coastline, but regions where the meanders brought warm air towards the icy continent match those where most sea ice vanished. On the other hand, weaker westerlies near Antarctica go with stronger westerlies and more storms farther north, near New Zealand, “which is what’s giving us this lousy summer so far”.

This pattern is not uncommon, but usually only lasts for three to four weeks. This time it persisted for more than three months, but is expected to break down around the end of this month.

Renwick says it’s too early to say whether the change is part of the natural variability of a hugely complex system or the beginning of a new trend – but regardless, scientists are keeping a close watch.

One of them is NIWA oceanographer Natalie Robinson, who studies the physics of sea ice. Late last year, she spent five weeks camped up in shipping containers on three-metre-thick sea ice in McMurdo Sound, 60km from Scott Base. Her mission is to figure how sea ice forms, particularly near the edge of the world’s largest slab of floating ice, the massive Ross Ice Shelf, and how it can be growing bigger when the Southern Ocean has been warming.

The westerlies are a lead player here too, pushing the sea ice out further and possibly stretching it in the process, but there is another process involved. It’s counter-intuitive and complicated. Beneath the ice shelf, the ocean water is supercooled – at minus 1.9 degrees much colder than the normal freezing temperature. The fact that it remains liquid is a consequence of its salinity and the pressure it’s under, sitting hundreds of metres deep below the ice shelf.

“You’d think a warming ocean would form less sea ice but that has not been true over the satellite era. In Antarctica, sea ice has been covering a bigger area, but we don’t know about its thickness. The prevailing theory is that the winds are driving this but we’re trying to find out if this process also plays a role in the growth of sea ice.”

About half of Antarctica’s ice cap drains through what oceanographers call cold-cavity ice shelves. The Ross Ice Shelf is one of these, and one of the areas where sea ice has been growing. The other half, the warm-cavity coastal areas, have made the news frequently since glaciologists announced two years ago that some glaciers in West Antarctica may have retreated beyond a point of return. Some headlines introduced the findings as the “holy shit moment of climate change”.

This could add a local factor, says Robinson. “Just around the corner are the warm-cavity ice shelves that we know are melting. That meltwater flows around the continent and into the Ross Sea, making it a bit colder and fresher and it more readily forms sea ice.”

Her expectation is that in the short term (and from the perspective of a scientist working on complex global systems that can mean 100 years or more) this process could get more vigorous and we “might end up with more of the ice shelf being translated into sea ice”.

In the long-term, however, sea ice around Antarctica is expected to start disappearing, as it has been in the Northern Hemisphere. Natalie Robinson agrees that it’s too early to know if this season is an outlier or heralds the start of a new trend but “so many things are shifting dramatically in the climate system, I reckon that that might be the start of a different system operating in the Antarctic. It might take a decade or two before we can actually see that for sure in the record but just the rate of change you see in other areas of the climate in other regions, in one sense it’s terrifying but in another sense it’s an opportunity for the science to keep up and understand what’s happening.”

TEDxScottBase will explore climate change in Antarctica. It was recorded at Scott Base but will broadcast globally, across all time zones, on Sunday January 22.