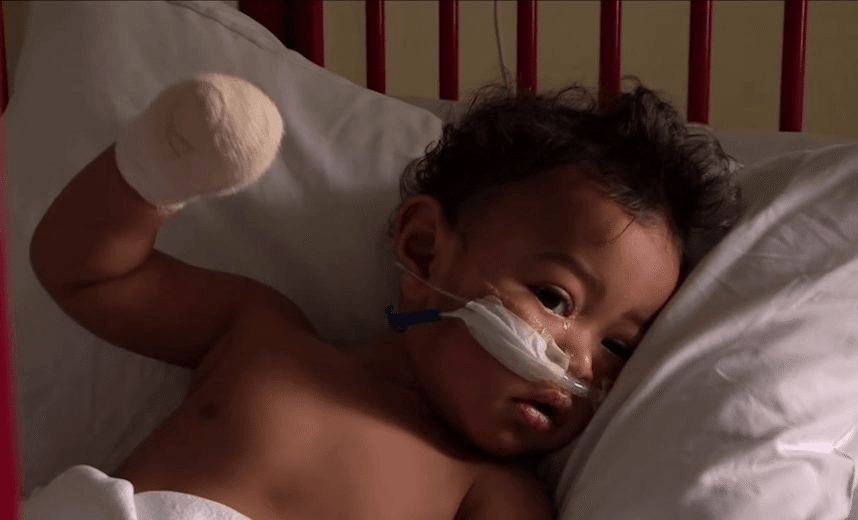 A child being treated at Wellington hospital for a respiratory tract infection. Taken from Bryan Bruce’s 2011 documentary ‘Inside Child Poverty’ (Red Sky Television/TV3)

‘These diseases should not exist in wealthy nations’: How the housing crisis is sending NZers to an early grave

By George Laking
Guest writer
Made possible by

A child being treated at Wellington hospital for a respiratory tract infection. Taken from Bryan Bruce’s 2011 documentary ‘Inside Child Poverty’ (Red Sky Television/TV3)

There are many victims of the spiralling property market, but the worst by far are those children whose health is wrecked for life by substandard, overcrowded accommodation. In this Rent Week reissue, Dr George Laking explains why the housing crisis should come with a health warning.

We loved our scuzzy flat in Central Wellington in the summer of 1991. By day I was learning about housing and health at the School of Medicine. By night I was sleeping in a house where hessian scrim hung from the walls’ roughcut boards. Rain bounced off the backyard trees and through the open sash window. Strategic feline shitting holes dotted the dining room floor. Mum and Dad looked pale.

Similar warm sentiments emerge from the NZ Property Investors Federation today. “I had a dingy student flat, and I loved it,” says their Executive Officer. A student dive is a frequent rite of passage for New Zealand’s monied class. It can be worn in later years as a badge of pride, and admonishment to those with longer term poverty commitments.

As in real estate, poverty provides medicine with endless points of interest. Key bacterial players include Streptococcus, Staphylococcus, Klebsiella, and Bordetella. The first two are named for their appearance. Coccus is a sphere, strepto a twisted chain, staphylo a grape-like cluster. The second two are named for continental bacteriologists Theodor Albrecht Edwin Klebs (1834–1913) and Jules Jean Baptiste Vincent Bordet (1870–1961).

Klebs had it in for bacteria. In his view, 1) all bacteria were pathological, 2) bacteria never arose spontaneously, 3) every disease was caused only by bacteria, and 4) bacteria that cause distinguishable disease are distinguishable. Before long, exceptions were found to each of these rules apart from 2). Klebs’ second postulate still stands: bacteria never just “happen”.

Klebs’ and Bordet’s portraits reward a viewing. Those eyes hadn’t just looked into the lenses of slow-exposure Edwardian cameras and microscopes, they’d stared into a septic abyss. Bordet survived into the era of effective antibiotics and a vaccine against the organism that bears his name (Bordetella pertussis, which causes whooping cough).

Textbooks advise that rheumatic fever “occurs after exposure to certain strains of Group A streptococcus”. The microbe mostly causes sore throats and skin infections. The immune system attacks its own tissues, because it confuses them with the microbe. Targets include the skin, joints, brain, and notably, the valves of the heart. Some people have genetics that increase the risk. But as Klebs noted, the one out of four times he was spot on, rheumatic infections never just “happen.” You have to arrange a meeting between Group A streptococcus and people. It works best with poverty and overcrowding.

Rheumatic heart disease is for life. Attacks of fever can make heart valves leak and rupture, requiring emergency surgery. Acute attacks become less frequent, but valves stay damaged. Doctors are taught to ask whether there is trouble keeping up in childhood sports, as failing valves cause breathlessness. Later on they can be infected by different bacteria, leak and rupture, and spread infection more widely in the body. For some reason bacteria that live on the teeth are partial to heart valves. Anyone with such a valve who has dental work must first take an antibiotic.

Bronchiectasis happens when airways (bronchi) in the lung become scarred and widened (ectactic). It is often caused by necrotising (tissue killing) infections of the lung. The main culprits in NZ are Staphylococcus and Bordetella (Klebsiella is more rare for us). Phlegm pools in the ectactic bronchi. The stagnant phlegm itself becomes infected, setting off other infections and asthma. Again, bronchiectasis doesn’t just “happen”. Its preferred habitat is poverty and overcrowding.

The textbooks note that cystic fibrosis causes similar changes in the lungs, but more rapidly. Bronchiectasis is cystic fibrosis on a discount, gifted by poverty rather than genetics. It also is a gift for life, usually until a chest infection wins, sometimes with more spectacular death by lung haemorrhage.

These diseases should not exist in wealthy nations. New Zealand’s rate of bronchiectasis is triple the UK’s, its rheumatic fever rate is 30-fold. Although rheumatic fever has been notifiable since 1984, it took until 2011 for the Ministry of Health to set up a prevention programme. At last there is an effort to make sure any young Pacific, Māori or otherwise at risk person with a sore throat gets the chance to have antibiotics.

But even antibiotics only address a symptom. The underlying causes are poverty and overcrowding. What causes these diseases in New Zealand in 2016? That’s obvious: policy settings that have overheated the housing market.

The usual lament in media reports of house prices is that young couples can’t get ahead and are trapped in rental. This is far from the worst effect. That prize should go to the children whose health is wrecked for life. A straight line connects New Zealand’s housing policy with diseases that should not exist.

So my medical plea to owners of property, me included, is to look forward to the day the housing bubble bursts. Pop a bottle of fermented grape juice on that day, and toast the loosening of poverty’s twisted chains – and their bacterial coating.

The home page image for this article shows a child being treated for a respiratory tract infection in Wellington Hospital. It is a still from Bryan Bruce’s 2011 documentary Inside Child Poverty (Red Sky Television/TV3), which you can watch here.