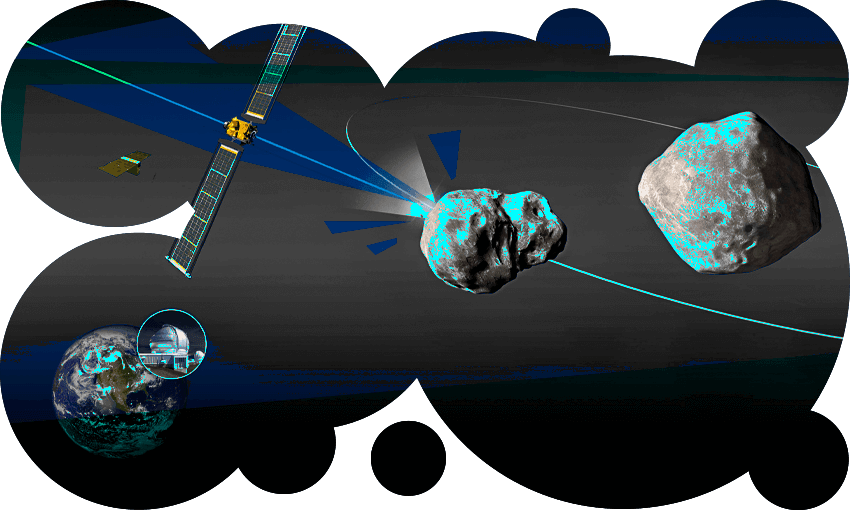 Nasa’s about to launch a test spacecraft to fight off Earth-destroying asteroids. Mirjam Guesgen explains.

Nasa’s testing whether it can use a spaceship to change the course of an asteroid. If the test works, the agency might have a new way to deflect potentially dangerous asteroids headed for Earth.

In other words it’s launching a bumper car into space to bounce away a death rock.

Wait, there’s an Armageddon-style asteroid coming for us all?!

This is just a test of the technique, called the kinetic impactor technique, and the asteroid Nasa is targeting isn’t a threat to Earth.

And technically, it’s not even an asteroid they’re trying to hit. It’s the asteroid’s mini-moon.

The rock is called 65803 Didymos and its moonlet is called Dimorphos. Both are closely monitored by space agencies on Earth.

When will this happen?

The rocket will be launched tonight (Wednesday, November 24) at around 7:20pm New Zealand time (1.20am EST) but the spacecraft will need some time to travel to the asteroid and won’t boop Dimorphos until late September 2022.

This sounds a little Jerry Bruckheimer-y?

Just because there are Hollywood movies about it doesn’t mean it should be dismissed, says Guglielmo Aglietti, director of the Space Institute, Te Pūnaha Ātea.

He explains that although extinction-level asteroids hitting the Earth is a rare occurrence, it’s a real possibility that we need to be prepared for.

“Nobody knows when it will happen next, whether we’re talking a few hundred years or a few thousand years or maybe even a hundred thousand years, but it’s one of those things that could happen. It’s good to be prepared… it’s not just a theoretical risk, it’s a real risk.”

We need to test this tech now so we’re ready for the real thing later on.

So how does this work?

The mission is called the Double Asteroid Redirection Test (Dart) and it’ll involve launching the Dart spacecraft from a SpaceX Falcon 9 rocket. The spacecraft will then guide itself to the moonlet using an onboard camera and high-tech autonomous navigation software.

The Dart craft will hit less with a bump and more with a shove. It’ll be travelling at around 6.6km/s, or 23,760km/h, on impact. That’s about the speed of a ballistic missile.

That shove, although it sounds forceful, will only change the orbit of the moonlet by a fraction of a percent and the time it takes for the moonlet to orbit the asteroid by a couple of minutes. “If you try and deflect these objects when they’re very far away, then even a little deflection will be good enough to move it out of the way of the Earth,” says Aglietti.

The Nasa team here on Earth will keep a watchful eye over the whole thing using telescopes and planetary radar (radio signals).

Is it hard to do?

The collision will happen when the asteroid and its moonlet are about 11 million kilometres away from Earth, or about 28 times as far as us to our moon. So the spacecraft not only has to ram into the object with some force, it has to hit it in the right spot and at the right angle.

The success of the mission comes down to some cool tech, for sure, but also careful monitoring and prediction of where the asteroid will be, he explains. “We monitor most of the bodies we can see. If we improve our capability to detect these objects and to predict what their path is going to be with higher precision, then that’s good.”

What else could we do to combat potentially Earth-destroying asteroids?

There are a couple of other options to get rid of pesky asteroids, each with their own pros and cons:

The “easiest” would be to blow it up with a big missile, but then it’ll likely shatter into lots of smaller pieces that could still hit Earth.

Last year, Nasa’s Origins, Spectral Interpretation, Resource Identification, Security, Regolith Explorer (Osiris-Rex) craft successfully touched the Bennu asteroid but that took a great amount of planning and careful manoeuvring. So it’s a slow process and the asteroid would have to be far enough away that there would be time to change its course.

Or you could go full Star Wars and use a series of lasers in space to blow up the asteroid when it’s far enough away from Earth that those bits won’t hit us. Those lasers could also slice a chunk off the asteroid that would collide with the rest of the rock and alter its course. Two scientists in California have proposed this, calling their potential device Directed Energy Solar Targeting of Asteroids and exploRation, or De-Star.

OK, sounds chill, can I watch the launch?

Yup. Blast that Aerosmith circa 1998 and tune in either to Nasa Television, Nasa’s YouTube channel or using the Nasa app.

If you really want to be in the know, you can register to get information about the launch schedule. And for the super-keen, you take part in the Planetary Defenders campaign and earn yourself a snazzy certificate.