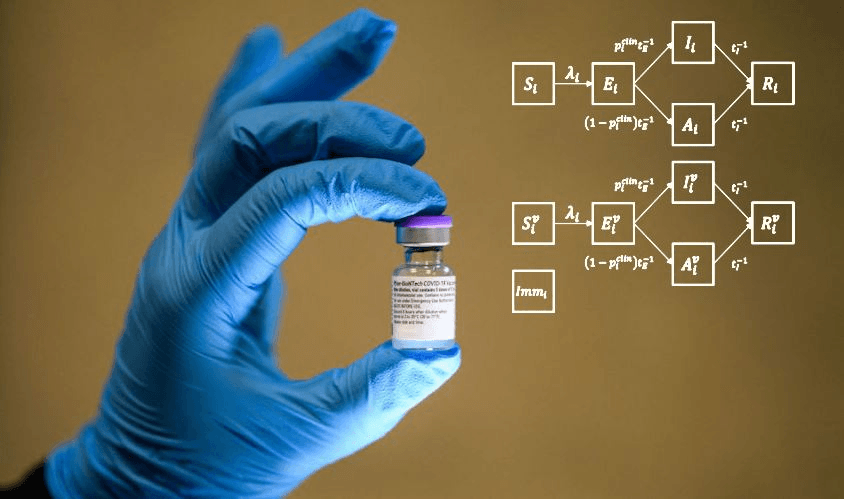 As the virus continues to rage around the world, a sobering new paper finds that a strategy pursuing herd immunity alone is insufficient, especially when new threats such as the delta variant come into play.

Any prospect of vaccination as a silver bullet in tackling Covid-19 in New Zealand has been fatally blunted by new modelling from Te Pūnaha Matatini. It estimates that at least 83% of the population would need to have two doses of the Pfizer vaccine to achieve herd immunity.

Even that figure is optimistic. It is based on the strain of the coronavirus threatening New Zealand being one of the earlier forms, which are assessed as having a reproduction number of about 4.5 – meaning that each infected person on average transmits the virus to another four and a half people.

A greater threat is posed by the “delta” variant. Currently ripping through populations in many parts of the world, delta is the strain detected in the Bondi cluster, which includes the recent visitor to Wellington, whose positive test on his return to Australia saw New Zealand’s capital thrown into alert level two.

A variant such as delta is thought to have a reproduction number of around 6. At that point herd immunity, or population immunity, “would require approximately 97% of the population [to be vaccinated], something which is unlikely to be achievable in practice”, notes the paper.

Crucial though vaccination is in the response to Covid-19, it is not about to make the measures at the border and within the country redundant any time soon, the paper suggests. To do away with those would “risk serious health impacts, including thousands of fatalities”, it concludes.

The findings “do not mean all is lost”, said Professor Shaun Hendy of TPM. “Because if you combine vaccination with other controls, for example regular mask use, scanning in and allowing contact tracers to do their job, you can get the reproduction number down below 1,” he told The Spinoff.

“Based on the information we have now, to control delta, we’d need to have both very high levels of vaccination coverage and have other measures in place … The key conclusion is we’ll probably need to have a mix of measures to achieve population immunity. It won’t be just be the vaccine.”

Another author on the paper, Michael Plank, stressed: “We’re not going to one day magically hit a population immunity threshold where we can open the borders and everything goes completely back to normal. It will be more of a gradual relaxation of border measures alongside continued testing and contact tracing measures.”

The findings of the paper, yet to be formally peer reviewed, are based on the vaccine reducing transmission by 85%.

“Māori communities are exposed to both of these risks currently with a vaccination programme that is underperforming in terms of equity. The paper is a timely provocation to ensure that a pro-equity vaccination programme is resourced,” said Jansen. “Until vaccination rates in the order of 90% of eligible Māori are achieved, opening of the borders would likely be catastrophic.”

TPM is planning more work in the coming weeks looking at the potential impact of targeting particular demographic and geographic groups.

New Zealand remained to a large degree at the mercy of what happened beyond its borders, said Hendy.

“In the long run it’s going to depend on what happens overseas. If we can all use this combination of measures to essentially get population immunity in most of the world, that will have the effect of just reducing the number of infected people that are out there, so it’s going to be less likely that people bring it into the country if they travel,” he said. “And it also affects the development of new variants. One of the reasons we’re facing so many new variants is because it has been out of control in many parts of the world – it’s been given many opportunities to evolve.”

The examples of places like the UK and Israel, where vaccine roll-out had been considerably faster, had limited usefulness, said Hendy.

“It’s important to remember they’ve still got cases. Cases are currently growing in the UK because of the delta variant, despite their very high level of vaccination and, presumably, immunity from natural infection as well. It’s worth remembering they had uncontrolled outbreaks. The vaccine has helped them an awful lot,” he said.

“But we’ve set our standards in New Zealand higher, in terms of controlling things. We can’t really take our foot of the brake until we get to the 80-90% vaccination level. If we started relaxing the border too much once we hit the 50-60% level, we could still have a significant outbreak here, and a significant loss of life.”

The TPM modelling is based on breaking down the population into age brackets, drawing on social contact survey data to estimate levels of contact between people in those groups.

The authors note that the “main purpose” of the paper is “to develop a model that can be used as the basis for policy advice on border restrictions and control measures in response to outbreaks that may occur during the vaccination roll-out … This work is intended to form a foundation for further Covid-19 vaccination modelling in New Zealand that will account for additional demographic variables.”

A survey conducted for the Ministry of Health in late May found that 77% of those yet to be vaccinated said they were likely to get the jab. Adjusted for those already vaccinated, “overall potential uptake” was estimated at 80% of people over 16.

Even if vaccine “hesitancy” reduces over time leading to an increase in potential uptake, a large number of under-16s will need to be vaccinated to have any realistic chance of achieving population immunity based on the TPM modelling. “We reached a pretty firm conclusion that we will need to go to under 16-year-olds to get close. In this scenario every vaccination counts,” said Hendy.

On June 21, Jacinda Ardern announced that the Pfizer vaccine had been provisionally approved by regulator Medsafe for people aged between 12 and 15. As it stands the vaccine has been rubber-stamped only for those 16 and older. A final decision is expected in the coming days.

While younger people were less likely to develop symptoms from Covid, “when our children are vaccinated, their teachers, friends, siblings, parents and grandparents are more protected from the virus too. So it’s in all of our interests for this group to get the vaccine,” said Ardern.

The New Zealand vaccine roll-out is currently running ahead of target, but remains one of the slowest in the OECD. The minister responsible for the Covid response, Chris Hipkins, said yesterday that local supplies of the Pfizer vaccine, upon which New Zealand is exclusively relying, would come close to being exhausted next week.

“We haven’t run out of vaccine and we’re not expecting to but we’re expecting to get very close to it,” he said. “Our lowest point will be next Tuesday but we’re also expecting another delivery next Tuesday. We have very carefully calibrated this [but] if the deliveries are late that might create a bit of a headache for us.”

The Ministry of Health did not respond to a request for details on how many of the 30 active cases of Covid-19 in New Zealand isolation and quarantine facilities had been found to have the delta variant.