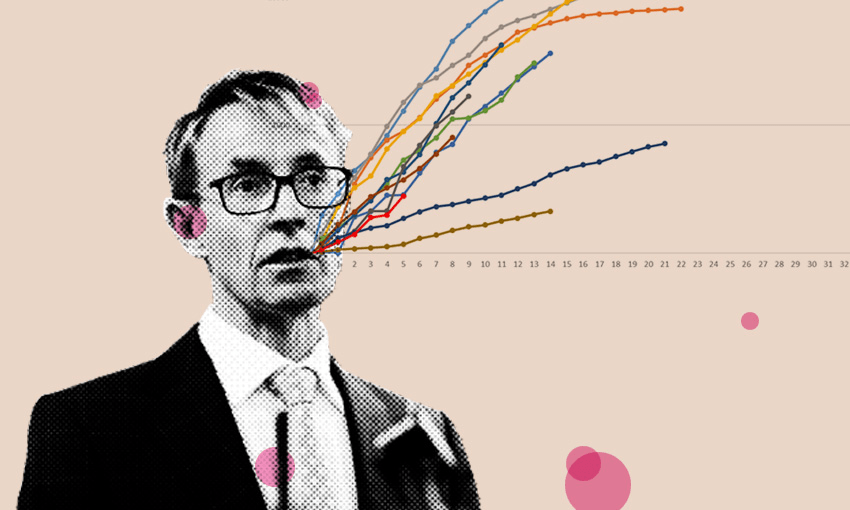 Director of health Ashley Bloomfield, who, on most days, reads the numbers that will define how the rest of this year plays out (Illustration: Simon Chesterman)

Director of health Ashley Bloomfield, who, on most days, reads the numbers that will define how the rest of this year plays out (Illustration: Simon Chesterman)

This work is entirely funded by the generosity of The Spinoff Members, with support from the Science Media Centre.

This afternoon’s Ministry of Health figures report that the total number of confirmed and probable Covid-19 cases increased by two to 1,479 (1,132 confirmed and 347 probable). This is the 13th consecutive day of single-digit increases. A total of 1,252 people have recovered which is an increase of 11 since yesterday. There were no further deaths overnight.

The number of significant clusters with 10 or more cases remains at 16, although one of these clusters was closed overnight. There are six people in hospital which is an decrease of one since yesterday. For the third day running, there are no known Covid-19 cases in intensive care units.

You can sort the table’s rows by clicking on the columns titles.

The symbol map shows confirmed and probable Covid-19 cases arranged by district health board. In keeping with the relatively small number of new cases, there is minimal change in regional counts. Waitematā (up one to 224), Southern (no change at 216), Waikato (no change at 186) and Auckland (up two to 175) remain the four district health boards with the largest number of active cases.

There are 15 significant clusters under investigation by the Ministry of Health and one closed cluster. Once again, no new cases were reported in any cluster overnight.

For the first time the ministry announced that they had closed a cluster. This was the Wellington Wedding cluster. The ministry anticipates closing more clusters over the next few days.

Closing a cluster signifies that ministry is confident there is no longer transmission of the virus within, or associated with the cluster. A cluster can be closed after 28 consecutive days pass since the most recent onset date of a reported case. This period corresponds to two incubation periods for the virus.