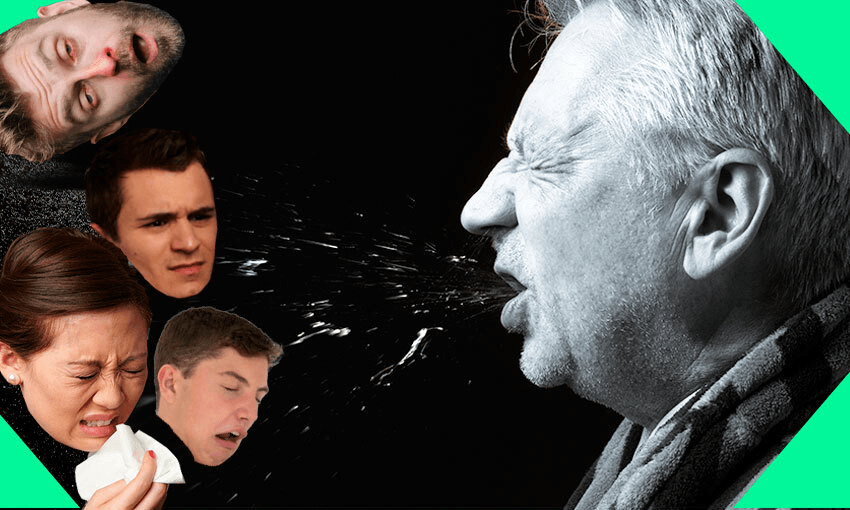 Joel Rindelaub is laughing, a guffaw big enough to pause our interview. He’s not normally like this: the media-savvy scientist is used to hearing people laugh at him thanks to his dry appearances on morning telly and mock chat shows. These days, thanks to his salient Covid advice, and his mullet-moustache combo, he’s become quite the media darling.

He’s the guy who coined the phrase “face hole”. He’s the one who told NZ Herald: “Dry humping is not a Covid-friendly activity.” He’s the person who recorded a Covid rap with Randa, rhyming the lines: “The virus will loiter outside your home / Try to steal your breath / Infect your dome.” When it comes to funny quips, Rindelaub’s normally the one delivering them.

Today, however, the tables have turned, and Rindelaub’s the one laughing so much he can’t talk. Why? I’ve come to the University of Auckland’s aerosol chemist with serious questions about a super silly topic, one that potentially affects everyone who works in a cubicle and has a nose: In the age of omicron, is it OK to sneeze in the office?

For 15 minutes, Rindelaub has patiently answered my questions, adding data points, footnotes and wry quips, where applicable. In short, he’s a perfect interview subject and a delightful hang. I’d have a beer with the Canadian ice hockey fan any time. As long as he didn’t sneeze on me.

But, near the end of our interview, I ask Rindelaub one question too many, and it sets him off. We’re discussing those with the uncanny ability to stifle their sneezes, bottling them up like they’re soda stream bottles, potentially doubling their velocity when they do finally arrive.

I tell him it’s unhealthy. I can’t do it. I refuse. To do so would be like popping Mentos into a bottle of Coke, a Mt Vesuvius eruption waiting to happen.

Rindelaub pauses, delighted with the visual. Then he loses it. I imagine his mullet and moustache twitching in delight. Finally, he lets out a proper big belly laugh. He’s broken. I won.

“This is great reporting, right here,” chuckles Rindelaub, collecting himself. “Great investigative journalism.” I tell him I’ve been doing this kind of thing for nearly 20 years, and he laughs even harder.

Sadly, he can’t help with my Mentos problem. We’ve reached the limits of his area of expertise. “I don’t have any quality input on these very insightful sneeze questions,” he says.

But he can help with something else. I’ve called him because The Spinoff has a full range of sneezers, from tiny “Tinkerbell sneezes” to one-two-three combos, to giant, doubled-over whooshes, the kind of violent outbursts that terrify anyone in earshot. That particular co-worker has to pull over while driving if he feels a sneeze coming.

Then there’s me. Like clockwork, just after 9.30am, I feel it begin to fizz. It’s like a shaken can of soda, building in the back of my throat. I’m too far from the door to run outside, too shy to just let it rip. So I hold it, turn to the side, sneeze onto the floor, and turn back to my computer, hoping no one heard.

Right now, with omicron spreading in the community, Rindelaub agrees that kind of behaviour is a no-no. He has some truly terrifying stats to share about what happens to your face hole while sneezing. “You’re expelling hundreds of thousands of particles at one time,”  he says. “They can go 150 kilometres out of your face … it’s absurd.”

That’s not all. Those particles have their bags packed. They like to travel. I ask him about the “moist zone”, the area potentially covered by a sneezer’s droplets. Rumours suggest it’s a one-metre radius. It’s way worse than that. “Your sneeze can travel completely undeterred, I would say, almost 10 metres,” he replies, once he recovers from the phrase “moist zone”.

Ten metres! If someone in your office has Covid, that means a simple sneeze could easily become a super-spreader event. “A sneeze is the best way to get Covid particles in the air,” says Rindelaub. To emphasise that fact, he says: “It’s way better than any other method.”

If you work in a closed office with no open doors or windows, the news gets worse. “Aerosols are just going to linger, they’re going to sit around,” he says. Unless your office has incredible air conditioning, droplets could remain for hours. “They’re going to linger and potentially fill up an entire room if there isn’t enough airflow to bring enough clean air in and take those dirty little particles out.”

Yuck. How do you avoid moisture droplets so small they can’t be seen? Rindelaub has some tips. If someone sneezed next to him, he’d use that as an excuse to grab a cup of tea. “That would be a good time to take a little break (and) let ventilation do its trick,” he says. If he was sitting next to a habitual sneezer, he’d set up a barrier, then pop a fan near an open window and face it out. “It’s going to suck in all the air in the room and push it outside.”

Some other tips for wary sneezers: wear a mask, and sneeze into your elbow. Don’t have a mask? Then sneeze into your shirt. Rindelaub warns you may need to change it. Yes, all of this sounds like a mucus-fest. It is. “It’s gross, it’s bad, I’ve done it,” admits Rindelaub. “I felt good about what I did for the people around me (but) that mask did not last the rest of the day.”

When it comes to curbing the spread of omicron, every little bit helps. The ultimate act of kindness to your fellow workmates is to anticipate your sneezes, and remove yourself from the situation. “See if you can sprint outside and do it there because the ventilation is way better than inside,” says Rindelaub.

Is that with your mask on — or off? Sneezers rejoice, you’ve finally found a safe haven. “If you’re outside, let it flow,” says Rindelaub. “Let. It. Flow.”