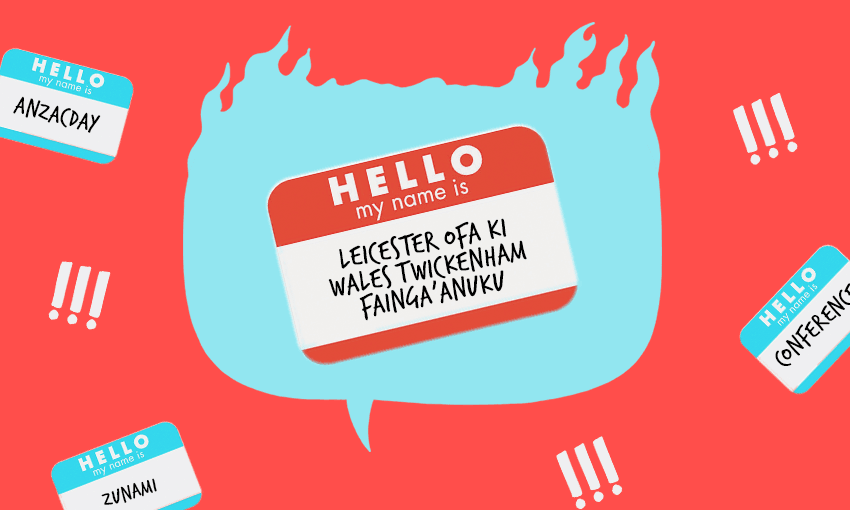 Why wouldn’t you give your child a name that’s theirs and theirs alone?

There’s a new All Black in town and his name is cool as: Leicester Ofa Ki Wales Twickenham Fainga’anuku. Leicester is the latest in a long line of Polynesians to wear the All Blacks jersey. His name is a reminder to commentators to brush up on their pronunciation, and to the public that yes – out-the-gate names like his do exist. In fact there are heaps of them. The names seem outrageous if you aren’t Polynesian; naming children after places, events or whatever happens to be top of mind that day is the norm.

To be honest, I never understood people who chose their child’s name just because they saw it in a list of names and liked it. How boring. No wild backstory, no endless umming and ahhing over which family member to not piss off, and no meaningful decision to honour one’s heritage or land. I mean, names are the only thing in the world that we own from birth to death. Shouldn’t it deserve a bit more thought?

I think it’s time we said goodbye to boring names. Or at least, the names that we have to hear all the time. What are you doing bringing yet another Emily or John into the world? Why is it acceptable that there are like 15 Hannahs in one school and yet learning to pronounce the names of children of colour is considered too difficult? Imagine having the same name as five other people in your classroom; turning your head only to realise, it wasn’t you they were looking for. Walking up to the stage during assembly only to be ushered off, because they didn’t mean you. Sounds more frustrating than having a name you have to teach people to say.

My first name is 13 letters long and I grew up going to predominantly white schools. I’ll never forget the time after patiently waiting for an award, a teacher called me to come to the stage in front of my peers: “Congratulations, Talofa!” I cringed so hard and madly took to Facebook after school to rant, “as if my mother would have named me ‘Hello’?!” Once I stopped shamefully mumbling my name and decided that it was totally cool, I realised the average Joes and Amys never had to deal with this name crap. A friend said to me once: “Their names are normal bro. Yours is not.”

The other night, munching on curly fries at Denny’s with fellow climate activists, the subject of unusual names came up. That night on Twitter, a thread called for “the most out-the-gate Samoan name you’ve ever heard”.  My friends took turns sharing the ones they knew. Cousins, church members and distant aunts who went through life with names like Nusipepa (Newspaper) or Aotearoa. We giggled at the slightly rude ones and sympathised with the names that were probably decided while under the influence.

whats the most out the gate Samoan name you’ve ever heard? I’ll go first: Anzacday

People of all backgrounds joined in the conversation on Twitter. Not all the names were Samoan, but most of their owners were. Someone’s uncle had been named Mount Eden after the prison. The other names that were considered “out the gate” included:

Perhaps the most iconic to be named in our conversation and on the Twitter thread is: Wales Manu Samoa 9-34. Has there ever been truer loyalty to the Manu Samoa rugby team? Adding the final score must have cemented not one, but two momentous occasions forever: a win for Le Manu and the birth of new life.

Do you keep a list of your future kids’ names? I used to, on the notes app on my phone. Ranked in order of favourites, I kept two separate lists. One would include names I thought were “cool”, unique and unisex: like Billie or Alex. This is because I don’t want to assign a specific masculine or feminine name to my kid before they’ve even figured out who they are. The other list included beautiful Polynesian names. For a long time though, due to personal name trauma, I was unsure whether or not the Polynesian names should be placed first or middle.

Now I think I might start making another type of name list, this one titled “Out the gate”.  You should think about making one too.