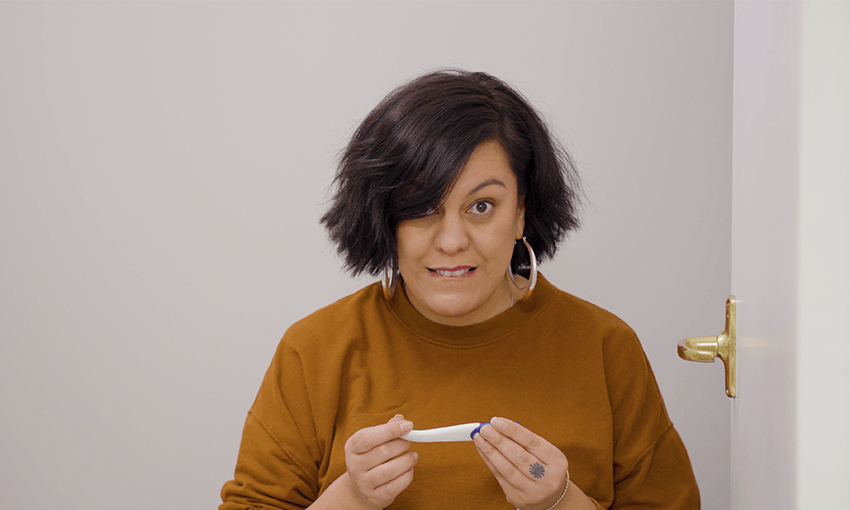 On the Rag co-host Leonie Hayden

On the Rag co-host Leonie Hayden

On The Rag host Leonie Hayden got (fake) pregnant and decided to get a (fake) abortion. This is her story.

Under our current abortion laws we have an illusion of choice. Abortion care has the outward appearance of ease of access, yet remains enshrined in the Crimes Act. As someone who has never had an abortion, I realised I don’t know much about the proces – from what’s discussed in the initial consultation, to the procedure itself. So I went and got one… By which I mean, I pretended to get one so I could go through the steps and hopefully help demystify the process for someone else wanting to make an informed choice.

First of all I had a consultation. You can go to Family Planning or your GP. I talked to Nurse Rachel at Family Planning and she was very cool and reassuring. If I was a teenager, she told me, there would be no requirement for them to tell my family.

Even if you’ve already done a pregnancy test at home, they may ask you to do another one. You’re going to pee in a small container and take it to the nurse or doctor, like the world’s worst birthday present. Once they confirm you’re pregnant, you’ll talk about your options. They might refer you to a counsellor (all abortion clinics offer counselling for free, both before and after the procedure). For some DHBs, it’s mandatory to offer counselling to someone seeking a termination. Fear not if you’re in your teens, everything you say to Family Planning or mandated counsellors is totally confidential. You can also call Youthline.

The next steps are the same for all pregnant people regardless of whether or not you plan to have an abortion: you’ll have swabs and blood tests which will confirm your pregnancy yet again by your hormone levels, and test everything from your iron and folate levels to whether or not you have any STIs. Then they’ll book in an ultrasound.

After the ultrasound results, you’ll be referred to a clinic and will be required to have two doctors sign off on the procedure. Often (but not always) you’ll meet with the first doctor and a second one will sign off based on the first doctor’s notes. Under the current law, an abortion will only be granted if the pregnancy will cause mental or physical distress to the pregnant person. Most doctors sign off on it because it’s easy to argue that being forced to keep an unwanted pregnancy would, of course, cause distress. However, one or both of those doctors can refuse as ‘conscientious objectors’ and they’re under no obligation to refer you to someone who might say yes. You’re covered under your local DHB to access services in your area for free, or your DHB will pay to refer you if there are none, but if you live remotely and both the doctors in your area refuse, you’ll have to spend your own money on travel, accommodation and doctors fees in another town.

Information on why abortion care is denied, and by whom, isn’t held anywhere so you have no way of knowing if your GP will have a moral objection to your health choice or not. You just have to cross your fingers and hope for the best. As the numbers bear out, a yes is much more likely than a no, but there’s no way of knowing for sure.

There are two types of procedure – medical and surgical. For pregnancies under nine weeks, you take some medication and pass everything at home. Nurse Rachel told me it feels like a painful period and it has a higher failure rate than a surgical procedure. The next procedure is a vacuum aspiration, for pregnancies up to 12 weeks and six days (very specific, I know). You’ll be given something to relax you and then a local anaesthetic in your cervix, and then the contents of the uterus is gently suctioned out. This only takes a few minutes. Up to 19 weeks, the procedure is done under general anaesthetic. After that, it’s only available in the case of severe fetal abnormalities and emergencies.

The recovery is fairly easy. After a vacuum aspiration you’re prone to infection for a while, so need to keep everything down there stress free – no baths for a while, no tampons, no exercise and no sex.

All up the process from initial consult to procedure can vary, depending on if you have to travel or if the services in your area are readily available, but because there are so many steps it’s a matter of weeks not days, no matter how sure or proactive you are.

It’s amazing so many people have had access to abortion care despite it being a crime in New Zealand. It has seemed so accessible to so many that at a speaking event with Gloria Steinem last year, some in the audience (feminists!) repudiated that there were any barriers at all to getting one. That’s because overwhelmingly our health practitioners know it’s a health issue and use the legal loophole, that a pregnancy will cause mental or physical distress to the patient, to approve the procedure. But ask around and you’ll find many people who’ve had abortions that have been made to feel like criminals by medical practitioners – doctors, nurses, ultrasound operators – because the law allows them to cast moral judgement. And for those thousands that have had to endure a pregnancy they didn’t want, access for everyone else is meaningless.

Later I sat down with the head of Family Planning, Jackie Edmond. She’s an abortion law reform campaigner from way back and believes abortion should be treated as any other health service.

“You go and see your health practitioner, you have a conversation, you get lots of information around the procedure or what your options are, and then you make your decision around whether you would proceed or not,” she says. “That’s how it should go.”

She acknowledged that because most people can access abortion care, the “mental and physical distress” loophole can seem like a rubber stamping step, but she said it can also be a barrier to people talking about it, even though one in four pregnancies in New Zealand ends in abortion.

“In this country the two biggest stigma in terms of health are mental health and abortion. I mean, we are managing to put them all into one package, which is very sad. So women are going through a very stigmatised process, which they can’t talk about. And then on top of that, they’re having to prove they’ve got a mental illness. It’s pretty terrible, really.”

I’ve marched for the right to choose on behalf of every single one of us because no one should have to live a life that’s not theirs. There are so many reasons people need access to this service, to think anyone can come up with one moral imperative that negates them all is arrogant at best and oppressive at worst. What they’re really saying is: “We don’t trust you. Even though we don’t know you, we know what’s best for you.” The current law that states two two consulting doctors must sign off before access to abortion care is given says exactly that. It needs to go.

Since filming my story, the Abortion Legislation Reform Bill passed its first reading 94 to 23, which will take abortion out of the Crimes Act and remove the need for statutory testing for a pregnancy under 20 weeks. It’s with a select committee right now and members of the public can make submissions until September 19th.

Restrictions on abortion don’t curb abortions rates, they just make it far more dangerous. In countries and states where’s its illegal or access is severely restricted, people drink dangerous concoctions and put dangerous objects in their bodies (although these rates are, thankfully, on the decline because even illegal abortions are much safer than they used to be). In all of history there has never been a law passed that has stopped people from having abortions. Isn’t that enough reason to stop punishing people and just help them safely access what they need?