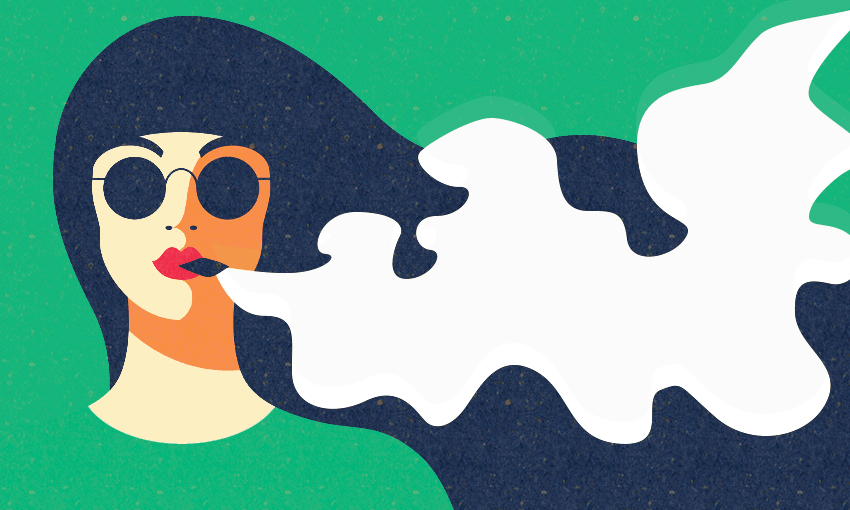 She’s been using cannabis for 35 years and has no intention of stopping any time soon – but she’d rather do it legally.

I’ll tell you exactly who first got me into smoking dope. It was my friend’s brother’s uncle. Let’s call him Paul. He was a big-time dope grower in the north-east corner of southern westland, and being more or less family was a trustworthy dude to introduce me to the pleasures and pitfalls of cannabis. I was 15.

It was a total-immersion education. We skipped entry-level joint rolling in favour of a whopping great bong, hewn from Australian hardwood. Etiquette dictated that if you could fill it with smoke, you had to drain it. Paul’s bushweed was strong. There was a lot of mongness and mountains of munchies.

My schoolfriends, meanwhile, played it straight, sticking to Miami wine cooler or beer by the quart. Paul rolled huge hooters for me to take to parties. I’d get pretty wasted, which was mostly good fun bar an occasional bout of paranoia and an overdose of Cheezels. But by the time my buddies were blotto, I’d be straight enough to look my mum in the eye when I got home.

Years later, my mother – an unfailingly sober, committed Christian – told me she seen her children drunk and stoned, and knew which she preferred.

Paul took me bush to check his patches, instilling in me the value of knowing your source. He strode through the undergrowth, fit as a mountain goat. Stumbling breathlessly into a clearing, I clapped eyes on “the airstrip” – maybe 10 square metres of densely packed plants budding up in the late summer sun, exuding the heady aroma of goodness.

A few years later I made it into university, a first in my family. Paul supplied me with pot to sell as a side-hustle to my part-time job. A tinny here, a quarter-O there, mostly to fellow students every bit as diligent as me. I didn’t think of it as criminal. I was paying for my education while providing a social service. If I didn’t sell it, someone else would.

In my mouldy flat, I habitually got high on my own supply, incinerating pea-sized balls of oily bud between red-hot, bone-handled knives. Boy, did it burn, that thick, hot smoke. My poor lungs.

But this was peak Cheech & Chong. The Fabulous Furry Freak Brothers. The card game, Grass. Stoner culture was everywhere, including NORML HQ on Cuba St where I’d hang about, unashamed. Just because it’s illegal doesn’t make it wrong.

I got busted by the police just once, smoking a racehorse round the back of a city bar. I flicked it into the gutter, but not quickly enough. “What were you smoking?” the sergeant asked. “Marijuana, Sir,” I replied.

Somewhat disarmed by my honesty, the officer questioned me briefly before returning to his car to check my deets. My friends and I stood chatting alongside. Five minutes later he emerged looking even more sheepish than me, said his computer had crashed, apologised for the hold up, and waved us on our way. “You got lucky this time,” he said, cheerily. We figured he had better things to do.

My friend and I smoked pot nearly every day of our final year of university. We both graduated with close to A-grade BAs. Fast forward 30 years and that friend is now a fulltime naturopath who regularly consumes cannabis chocolates. She says it’s a popular form of therapy among the healthy set.

In those three decades I’ve had a successful career, working for high-profile, multi-national companies abroad and running my own business at home for the last 20 years. Marijuana has been a constant companion throughout.

That said, I seldom smoke these days. After a lot of pot and a 25-year ciggie habit, I look after my health and have taken up the vaporiser instead.

It’s called the Mighty, made in Germany. Precision engineered, rapid heat-up, variable temperature settings to get the most out of your weed, clear LCD display, excellent battery life, and pocket sized with discrete aesthetics.

I’d been off the pot for several years because I was wrangling anxiety, and smoking weed wasn’t helping. But the vaporiser brought the good times back. The Mighty high is lighter, more uplifting. It makes me feel relaxed, cheery and open.

The vape has a pleasing vegetal flavour, and doesn’t make you reek of smoke because it doesn’t produce any. Surely, a lot of the trouble with weed is not what we’re consuming, but how. To quote Volfteface, a drug education NGO, “combustion, not the cannabis itself, is the culprit”.

A puff on the vape a few times a week, combined with a low alcohol intake, has me feeling physically and mentally sound. While many around me have turned to the pill pack and bottle, I’ve managed to find my way through in a way that feels natural.

I’m now dabbling in tincture: cannabis-infused alcohol, “full spectrum” containing both THC and CBD. A few drops every now and then, perhaps when I’m heading out to socialise or feeling a bit antsy. As it becomes more mainstream – which it will – I’m looking forward to conversations around other folks’ tincture experiences: how much, how often, how they feel.

It’s possible to be high functioning while regularly getting high. I’ve picked pot as my poison and pretty much stuck with it, obtaining it from trustworthy sources. My use is moderate, mostly in the company of friends and family. Over the years, most people have accepted my habit, endorsed it even. And it’s never been more acceptable than right now.

Last year my elderly neighbour spotted the pot plants in my garden, and didn’t bat an eyelid. Now that spring has sprung, it’s time to pop a few more in. That’ll gives us sufficient supply to last all year, with a few ounces left over to share.

And that’s why I’m voting yes.