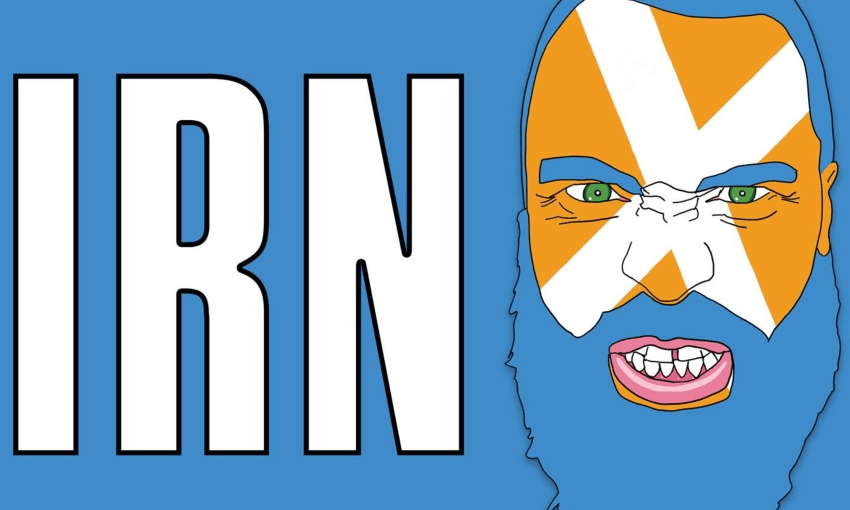 In part two of Mike Kilpatrick’s journey of losing weight through becoming a pro wrestler, he writes about the rage that a simple visit to the doctor can conjure. Read part 1 here .

Perhaps the only thing more inexplicable than a 44-year-old massively unfit man trying to become a wrestler is the love that most of my fellow Scots and I have for the soft drink Irn Bru. For those of you who haven’t had the pleasure it’s a sickly sweet, bright orange-coloured fizzy drink that, when served from a glass bottle, transforms into the greatest hangover cure known to man.

Whatever you think of Scotland’s other national drink it tends to be a polarising experience. A bit like Vegemite and Marmite but without the disgusting taste of… well, both of those.

It’s not the most obvious thing to compare oneself to. Who wants to engender such opposing positions of love and hate? Certainly no-one thinking straight. Perfect, therefore, for me and pro-wrestlers.

When I was growing up its advertising slogan was ‘Made in Scotland From Girders’, which still brings to mind strength and power, two things pro-wrestlers should undoubtedly have. But more importantly its name and slogan is open to puns – a staple of the wrestling business for as long as I’ve been watching.

I’d been playing with ideas and hadn’t found anything that seemed to fit. It was annoying me. Then in a flash of genius my partner, award-winning artist Sam Mitchell, transformed my wrestling destiny with the utterance of a few words. “You should be Irn Bruce.”

It was perfect and sounded like someone who could do bad things. A warrior. Yeah, Irn Bruce was angry. And so bad that he dined on the raw ground meat of Scotland’s national animal for dinner. Which is… the unicorn. No, I’m not joking. But I realised I could probably make even that work for me. Or should I say Irn Bruce.

I can see it in my mind now. Impact Pro Wrestling (more on them next time) announcer Steve McCleary is standing in the ring, resplendent in his shiny shoes, suit trousers and waistcoat, one arm behind his back as per normal, microphone poised.

“And introducing the challenger, from the highlands and islands of Caledonia, the wild man made in Scotland fae pissed-off unicorns… IRRRRRRN BRUUUUUCE!”

The heavy rock music rings out as this evil bearded guy appears, shouting insults at the crowd, gesticulating wildly. He slaps away the hands of the fans who want a high five. He stares at the kids and tells them they suck and attacks the good guy before the bell rings. The boos are deafening.

Especially when that’s not really who I am. I don’t tend to get annoyed easily and certainly not to the point where I could become violent. But my good nature was pushed to the limit following a visit to the doctors earlier this year that had me steaming from the ears.

I’d been to see about something unrelated to my weight. The nurse weighed me anyway, as seems standard these days, and noted I’d lost around 37kgs. I felt good in that moment but quickly realised that the habit of being weighed every time I went to the doctor had actually stopped me going in the past, actively putting my own health at risk rather than facing the wrath of health professionals.

The few minutes I spent with the doctor flew past, uneventful except for giving me hope that my health issue could be resolved. And as I stood to leave he stopped me.

“We need to have a chat about your weight. It’s a problem.”

I was stunned. I had been busting my arse for months and I literally couldn’t be doing any more. But in that moment it didn’t matter. I wasn’t a person, I was a set of numbers on his screen. Just an obese nonentity and something that needed to be fixed. I protested.

“I’ve lost a lot of weight and I’m still working hard and there’s more to go.”

I almost cried as he told me it wasn’t enough. I felt insulted. Betrayed. Less than human. A pile of shit.

And then came the rage, the rage that I’m going to channel in the seconds before my music hits and I walk through the curtain to the ring. My internal monologue was screaming.

“How dare he? HOW FUCKING DARE HE? I’m going to show him. I’m going to go and buy all the shit I used to eat and binge on it all. Pies, sausage rolls, cream buns, chocolate, pizza. I’m going to eat every last mouthful and then go and see him again and tell him I put it all back on just to spite him.”

And then Twitter came to my rescue again. One post to vent, one reply of understanding and sanity prevailed. I didn’t indulge that rage and Sam helped calm me down further when I arrived home. I resolved that I wasn’t going to let external validation – or the lack thereof – be one of my drivers.

But let’s be clear about one thing: the words may be different but what happened to me is happening to many other people in New Zealand on a daily basis. You’re not a complicated person with agency in such circumstances, you’re a BMI calculation that has to be lowered. You don’t matter. And that’s both heartbreaking and potentially deadly. I know I’m not the only person who has avoided going to the doctor because of the likely conversations.

I feel lucky that I had the support around me to be able to deal with a circumstance that could easily have thrown me right off my path. Others, I’m sure, aren’t as lucky.

And as I stepped on the scales this week, a wee glance in the mirror to see Irn Bruce staring back at me, and realised I’d lost a grand total of 60kgs I raised a middle finger.

An act of defiance, one that may become part of my wrestling persona, but ultimately a salute to a man who was supposed to help but almost brought it all crashing down around me.