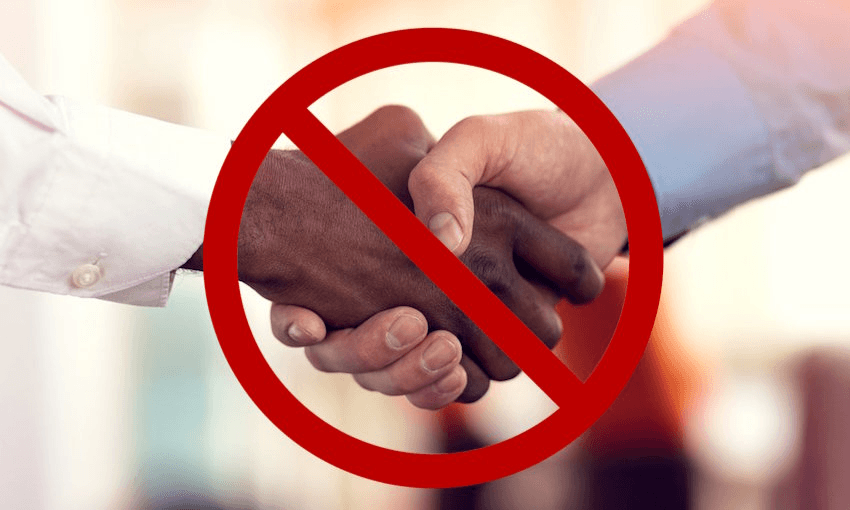 Our hands are tied: Seven alternatives to shaking hands

It’s a hard habit to shake – but we have to try.

The Covid-19 virus is spread mainly through droplets being coughed and sneezed onto people and surfaces which are transferred to others by touch.

One of the precautions recommended by experts to help prevent the spread of the virus is to avoid shaking hands. But it’s so ingrained in us as a gesture of friendliness and respect, it’s going to feel weird either not offering your hand, or refusing to shake if someone else reaches out with theirs.

To avoid seeming rude, here are some gestures you might want to consider as a replacement for the humble hand shake.

Cons: While this one is finding its feet……. it has great potential for you to be left hanging. People will definitely look at you like you’re off your perch while you wait with your leg outstretched.

Pros: It only requires a handful of early adopters, like the trendsetters below, to help it take off. Tell your friends.

This is how I'm greeting everyone the rest of the year pic.twitter.com/qecRcKHluh

The ‘Sup aka the The Chur

Harirū in Māori culture – where guests greet their hosts with a kiss or hongi – is a difficult issue in light of Covid-19. Hongi and kihi (sharing breath) are important parts of whakawhanaungatanga, and as with the discussion around children and consent, there will be people on different pages about whether tikanga trumps these concerns. However there is one other universally recognised Polynesian greeting that doesn’t require touching: the language of eye brows.

Cons: Restricted only to spectacle wearers and sunny days.

This jaunty greeting is going to be hard to pull off with strangers. We said hard, not impossible.

Definitely the coolest option on the list. In New Zealand Sign Language, ‘hello’ is a wave, however you could take it a step further and ask ‘how are you?/kei te pēhea koe?’ by way of greeting.

Flat hands, palms facing your body with finger tips touching, bring your hands out to either side into a thumbs up.

Not the coolest option on the list. Very much the least cool option.

The weenus is the skin on the end of your elbow. Touching it to the weenus of another person is probably quite an intimate gesture but some people might be into it. Yes technically this isn’t a non-touch gesture, but you’re unlikely to transfer germs from your weenus to your mouth and nose. Weenus.

Greetings around the world

We’re not suggesting it’s culturally appropriate for us to help ourselves to other peoples’ traditions, but because it’s interesting, these are some of the non-touching ways people greet each other in other countries:

Hands pressed together, as in prayer, is a common greeting in Cambodia, Thailand (often accompanied by ‘Sawadee’) and the Indian subcontinent (accompanied by ‘Namaste’) with a small bow of the head.

In Muslim countries, a greeting between men and women consists of the right hand on your heart, touching your forehead and then over your head accompanied by ‘salaam alaikum’. For non-Muslim men greeting Muslim women (and vice versa), just a hand on heart is appropriate.

Aadab is a gesture used by South Asian Muslims where the right hand is raised towards the face with palm inwards, in front of the eyes, with a slight bend forward.

In Tibet, sticking out your tongue is a greeting as well as a mark of respect. As the story goes, in the 9th century there was a cruel Tibetan king, Lang Darma, who had a black tongue. As Buddhists believe in reincarnation, people stick their tongues out to demonstrate that they are not reincarnations of the cruel king.