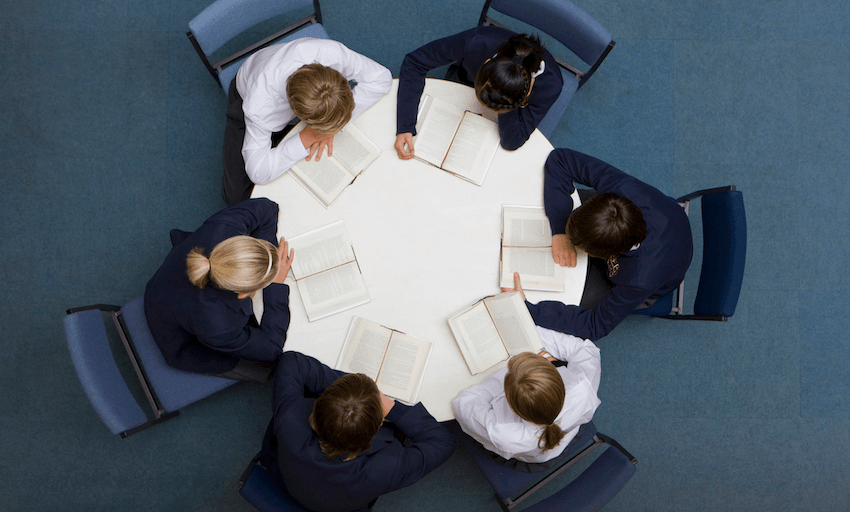 Auckland Grammar principal: Education Hubs would be a disaster for schools

A review of the school system has recommended sweeping changes, most controversially the implementation of a new organisation structure based around centralised Education Hubs. Auckland Grammar principal Tim O’Connor thinks that’s a terrible idea.

Amos’ is entitled to her views but has ignored the widespread and justified alarm about what will this mean for our community-led schools, from parents, education policy experts, and unions.

New Zealand’s largest education union, NZEI Te Riu Roa, says its members have expressed concern that hubs could mean “a loss of responsiveness to local communities” and a “loss of appropriate decision making in favour of bureaucratic paralysis”. It rightly points out that “personal and professional autonomy could be reduced if school leaders become state servants directly employed by hubs”.

An initial group of 44 schools from across the country, the Community Schools Alliance, has launched a campaign to raise awareness of the consequences of the Taskforce’s hub plan.

It’s an important debate; much too important to let some of the myths surrounding it go unchallenged.

The first myth is that our school system is in some kind of crisis. Cheerleaders for centralisation have even gone beyond the Taskforce’s own claims that most students and schools are performing well but that some students (specifically Pasifika and Māori) are under-achieving.

The truth is that statistics from the independent Education Review Office suggest only one in 16 schools requires any kind of intervention. To put that in perspective, around 93% of schools, representing 95% of all students, are doing well. New Zealand has been named the best school system in the world for preparing students for the future, by the influential Economist Intelligence Unit.

Supporters of the hub plan have used divisive rhetoric, suggesting support or opposition to hubs is about “rich schools” versus “poor schools”, as Amos did when she said that “well-heeled” communities support the status quo.

Among the Community Schools Alliance’s membership, we have schools from deciles 1 through to 10, from right across the country.

It is strange for Amos to claim, from the vantage point of Auckland’s North Shore, that Kaikohe, Murupara and Whangārei are “well-heeled communities”. But what our members Northland College, Hora Hora Primary School, and Te Kura Kaupapa Motuhake o Tāwhiuau have in common is communities who care about and take an active part in their children’s schooling, and well-justified concern about their schools being put under the control of distant bureaucrats appointed by Wellington politicians.

As I told my schools community in a recent newsletter, we are proud of the educational and wider opportunities we offer our students, but we have never claimed to be the best school in New Zealand. Indeed, for some, we may not even be the best school in Mountain Road. Students and communities are different and there is ultimately no such thing as the best approach for everyone. That was the genius insight of David Lange’s Tomorrow’s Schools: that school communities know best the individual needs of their young people.

In stark contrast, a strong stench of paternalism runs through the Taskforce recommendations. Its starting premise is that boards of trustees cannot be trusted to run schools. Instead, it proposes “one size fits all” hubs.

Currently, each school is responsible to its own Board of Trustees, elected by parents from mums, dads, old girls and boys, and members of the community. The board employs the principal and sets the direction of the school through strategies, budgets, property plans, enrolment policies and hiring principals and teachers.

The chair of the Taskforce, Bali Haque, has said that boards will still exist under the Hub plan. But that’s the same as saying that after your vehicle is written off in a crash, you still technically own a car.

Under the Taskforce’s recommendations, all these legal responsibilities for a particular school would be handed to a hub, each of which would be responsible for up to 125 schools. As education policy expert Dr Simon Smelt says, there will be little left for boards of trustees to do except choose paint colours and run cake stalls. Meaningful, direct parental involvement will be destroyed.

After seeing the negative initial reaction to his report, Haque has now changed his tune on principal appointments. He says the Taskforce never intended that principals be moved around at the whim of Hubs from school to school.

The problem is that his recommendations have not changed in line with his rhetoric. The recommendation is crystal clear: “Education Hubs would provide principals with ongoing employment and appoint them to a particular school for a five-year contract. This would allow principals to … contribute where their expertise is needed across the community of schools.”

Although the watered-down boards of trustees will have a role in principal appointments, they may not even get to consider their existing principal as a candidate if the hub in its wisdom decides otherwise.

There is no evidence hubs will improve our schools in any way. What can we do instead? McKinsey released an analysis of what sets the best performing school systems apart. It concluded that changes to governance structures had little effect across the whole of the school system. What mattered at individual schools was strong leadership, and what mattered through the whole system was attracting, training and retaining the best teachers.

That’s why we should invest in teaching rather than new government offices.

There are challenges. A small minority of schools are not performing as well as we would all want. In many cases, this is because of wider social issues. Māori and Pasifika students continue to be over-represented among low achievers. Where we have seen some of the most spectacular progress is in kura schools which proudly and unequivocally design their school around the most positive values of their communities.

These aren’t secrets that the Taskforce discovered. The education sector has been talking about them for decades and asking for help where needed.

But greater centralisation through Hubs is most certainly not the help we need.

Where schools are struggling because of social deprivation, and need and want more assistance and support, they should get it.

If there is a huge pot of extra funding that can be dedicated to education – and the hub plan itself is impossible without a massive injection of new spending – it would do the most good going to targeted support for disadvantaged students along with a big new investment in teacher training, pay and conditions.

The Community Schools Alliance is not opposed to all the Taskforce’s recommendations. In particular, we support its proposals to:

The government could take these steps now, without the time-consuming and expensive empire-building of new bureaucracies. They would represent real progress towards tangible improvements to our school system, while not wrecking part of what makes our community-led schools so special. They would attract the universal support of teachers, principals, schools and parents. It would bring the education sector together again without the expensive and divisive distraction of hubs.

Agree? Disagree? Read the full Tomorrow’s School’s Independent Taskforce report here and decide for yourself. Public submissions on the report close on April 7.

Tim O’Connor is the principal of Auckland Grammar and a member of the Community Schools Alliance.