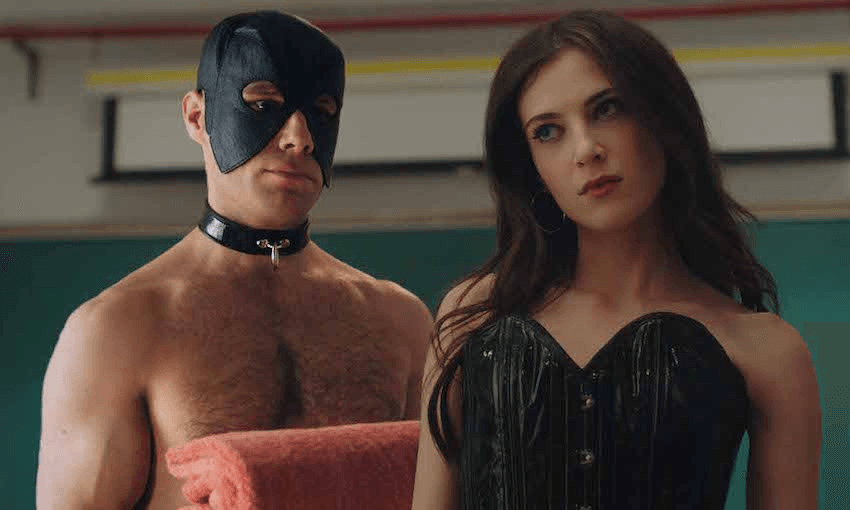 “Everyone thinks domme work is about sex work, but it’s actually about liberation from shame,” declares Tiff at one point, as she concludes a tedious Psych 101 rundown of what her clients get from their encounters. Her argument is that they’re victims of the “crippling societal prison” of toxic masculinity, desperate to hand over the reins of control to someone else and give up the power they’re expected to wield in every other facet of their lives.

To be fair, she’s half right. Being absolved of the responsibility to run the show is what a lot of clients get from professional domination – but they’re not really giving up their power. They’re paying for a service, and they’re dictating the terms of that service. Sex workers’ advertising copy is full of promises of authenticity and genuine pleasure on the part of the provider – the illusion that the money is just a nice bonus is part of the experience we provide.

I’ve thought before, giving the fifth prostate massage of the day and myself RSI to boot, how nice it would be to have the money and uncomplicated relationship with my body to outsource responsibility for my pleasure to someone else. Clients get the fully immersive fantasy that their specific desires are something which I want, expedited by the submissive role.

It’s simplistic to claim the power exchange is authentic, and this makes Bonding’s conceit that Tiff got into dungeon work to get revenge on ‘bad men’ particularly grating. In truth, sex work still accommodates the desires of men, it just finally compensates workers for the physical, mental and emotional labour involved in that. Tiff foreshadows her eventual big reveal in a presentation to her psychology class by asking questions about the healing power of role play – furthering the idea that domme work is a therapy for her, as well as her clients. But it’s not (or at least shouldn’t be). It’s a job.

The idea Bonding perpetuates that dungeon work is somehow fundamentally different from full service sex work (escorting or prostitution), has also been justifiably criticised. It elevates it as acceptable, because it’s spiritual or healing or specialised. Domme work requires specific skills certainly, but having done both for a number of years I would be loathe to claim one is ‘more specialised’. There are expert skills in all kinds of sex work – hustling in a lounge is different to managing the time in an overnight appointment is different to drawing out exactly what a man means when he says he wants to feel humiliated (Verbally? Physically? Playfully?).

Positioning Tiff’s work as a therapy also serves to excuse a lot of the terrible ways Pete, Tiff’s friend and assistant, is treated, and here is where I think the show really fails to take advantage of the opportunities to consider how finances affect choice. Pete’s broke: he can’t pay his rent, and in one plotline that gets played for laughs, his (straight) housemate offers him a month’s free rent in exchange for some anal play. Here is a perfect opportunity to consider what ‘choice’ looks like when your options are sex acts or eviction, but instead it’s treated as a funny sexual encounter. More to the point, why does Pete’s housemate think it’s OK to proposition him for sexual favours?

Again, there’s plenty to unpack here about the ways that Pete’s sexuality and his job mean he’s assumed to be up for anything, but Bonding misses the mark. It gets so close when he nearly walks out of a date at a go-go bar, but once again the show blithely bypasses an opportunity to explore a more interesting question: what sort of expectations get placed on sex workers in their personal lives? The conflation of a work persona with personal desires is what lands Pete (and other sex workers) in this predicament.

Finally, there’s the question of how much choice he even has in being Tiff’s assistant. She tricks him into assisting to start with, brings him along on an abduction fantasy booking where he’s pressured to engage in a role play against his will, then throws a wad of cash at him and says, ‘There’s more where that came from’ if he’ll agree to help out again. She treats him like a prop, and manipulates his financial need in a way that is deeply uncomfortable to watch.

In the final sequence, Tiff and Pete arrive to a client’s house, and she comments he made an offer they couldn’t refuse, then Pete realises, too late, he’s already seen the client being kicked out of Tiff’s dungeon for assaulting a worker. The client attacks Tiff, but she fights back, and escapes with Pete. The role which money plays here is treated as incidental, not central. Did Tiff take the appointment herself, or was it arranged by the house? Was she the one who made the call to take the appointment without fully screening the client, or did her management decide money was more important than the safety of their staff?

Bonding is clearly restricted by the limitations of a 15 minute episode format, but questions like the ones above indicate the avenues that perhaps weren’t considered. To me, they’re the most interesting. Bonding fails in the way that most representations of the sex industry do, in that it only really considers the relationship with clients as worth exploring. Tiff’s relationships with her co-workers, her power over Pete, and Pete’s relationships outside the dungeon get sidelined. Interpersonal and structural power dynamics and their intersection with economic need are much more compelling than a piss-play scene in a millennial pink dungeon.