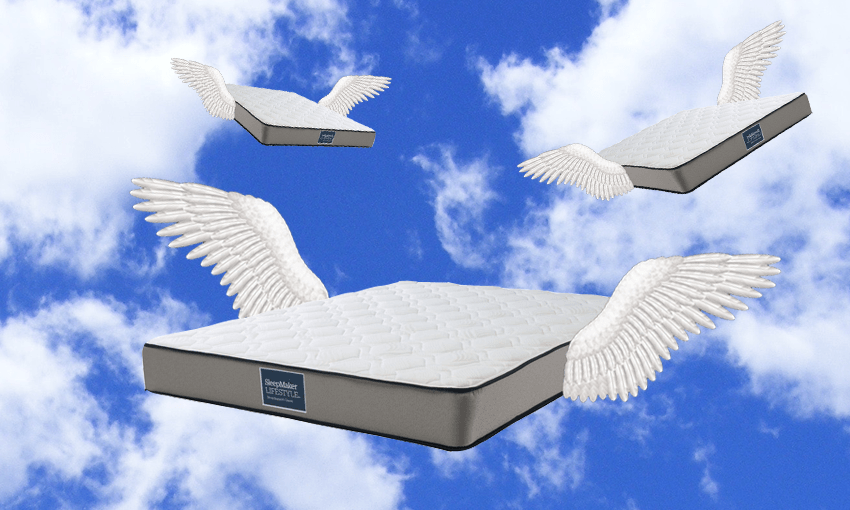 How to kill a mattress

Where do mattresses go to die? The dump, of course. But Michael Andrew has other ideas.

In the furniture world, there’s no sadder life than that of the mattress. I’ve slept on mine almost every night for 10 years. I’ve eaten on it, read on it, watched TV on it, dreamt on it, cried myself to sleep on it and much more.

Despite this intimacy, scarcely a thought or prayer is given to a mattress when its time comes. In the unlikely case that yours is unsullied enough to be collected by the Salvation Army and given a second life, it will surely end up at the dump, buried in a garbage grave with the contents of your recycling bin and 800,000 compostable coffee cups. Meanwhile, you’ll be at home, excitedly unwrapping your brand-new mattress from its plastic envelope.

As depressing as this seems, the real tragedy here isn’t the poor lives of mattresses but the space they collectively take up in death. According to Rebound, a project being run by product stewardship specialists 3R Group, 300,000 used mattresses end up in New Zealand landfills every year. Stacked on top of each other in Princess and the Pea fashion, they’d reach the edge of the stratosphere.

To ease this frightening use of landfill space, attempts have been made to recycle old mattresses that can’t be reused. Each one is broken down into its core material – wood, foam, metal – which is then recycled separately, reducing the volume of material going to landfill. However, this takes time and money. Too much, it seems: McLaren Park and Henderson South Community Trust at the Waitākere Refuse & Recycling Centre tried this method for a time, and while Rebound hoped to be an industry-funded product stewardship scheme, currently it is only running in Timaru as a council-funded service.

So, when it was time to dispose of my nocturnal companion, I decided to do it the honour of dismembering it myself. That way I could pay my respects while sparing the soil the burden of its immense bulk.

I’d be lying if I said that dragging the hefty thing outside was the hardest part. Armed with nothing more than a craft knife, I made the initial incision and quickly realised why the good folks at the Waitākere Refuse Centre had given up doing this on an industrial scale. Layer after layer of dense foam and fabric stubbornly resisted the jerks of my knife which, rather than cutting the material into neat squares, tore it into tatters that scattered across the yard in the first gentle breeze.

Once past the foam, rather than finding a simple wooden frame that I could saw or bash to pieces, I found a complex hive of springs, each one wrapped up tightly in its own cocoon of cloth. Here, the knife was useless and only created more shreds of fabric which frustratingly tangled with the metal.

I felt like a honey badger tearing into a hive to get the bee larvae, all the while getting stung by barbs of metal as the springs sprung violently out of their pockets. After an hour I’d extracted 40 springs of what looked to be close to 1,000, so I decided to postpone it to the next day, leaving my partially disembowelled pal outside. Naturally, it rained that night and the next morning, I was forced to continue operating on what now felt like a giant, sopping sponge – its wet material even more resistant to my feeble tugs.

For two weeks, 30 minutes a day, this was the pattern. By the end, I hated the mattress and wanted nothing more than the satisfaction of condemning it to a stinking pit. I’d run out of space to store the springs, which scurried around the driveway like metal rats, and the fabric – damp for 10 days – was taking on the smell of a wet dog.

However, I finally managed to hollow it out of all but a strip of springs around the perimeter. Removing the foam here, I realised to my horror that a hidden steel frame connected all these springs to the remaining fabric of the mattress. To fully break it down I needed a hacksaw, which I didn’t have. I didn’t have time either. Or energy. Or enthusiasm. I just wanted to do something good, but all I did was illuminate the futility of domestic environmentalism. Either that or my own incompetence, but neither discovery made me feel better.

So I collected the springs, the pile of wet fabric and the still upright mattress skeleton and shoved it all into my van, completely soaking everything in a smelly, brown juice. Down at the Waitākere Refuse Station, I took the springs to the metal recycling section. The sodden fabric and foam? It turned out nobody wanted it. Why would they? It had to go in the pit.

The dump is a morbid place. It feels like a clandestine operation like it should be some kind of horrible government secret hidden from the public. But it’s not. The whole of west Auckland seemed to be there. Car after car reversed up to the edge of the pit, its drivers eager to rid themselves of the suffocating burden of consumerism. I joined the queue.

When my turn came I opened the back of my van and hurled the mattress remains into the abyss, noticing as it settled upon a pile of off-cuts how much space it still took up. No prayer was said. Feeling guilty and confused, I slunk back to my van, leaving the eulogy to the shrieking gulls and the grumbling bulldozer. As I drove away I could see the solemn machine pushing everything into an immense heap at the end of the pit, where, looming above everything else, a tower of dirty mattresses stood.

Despite my frustrating and graceless experience, after a few days my disillusionment subsided and I realised I had done a good thing.  A thousand metal springs had been saved from landfill, and I had learned perhaps the most valuable lesson about DIY sustainability: it’s hard. It takes time, and effort, and meticulous preparation. Whether it be changing shopping behaviour to reduce plastic, using public transport instead of driving, or saving a mattress from landfill, they all require a sacrifice.

After the trial in Timaru, Rebound will hopefully begin operating in other parts of the country allowing many of us to send our old mattresses to them. Until then it’s a case of working around a broken system and doing whatever we can to mitigate its flaws. Just make sure you have the right tools, and a full sunny day free; you’ll save more material from landfill. And you’ll certainly sleep better at night.