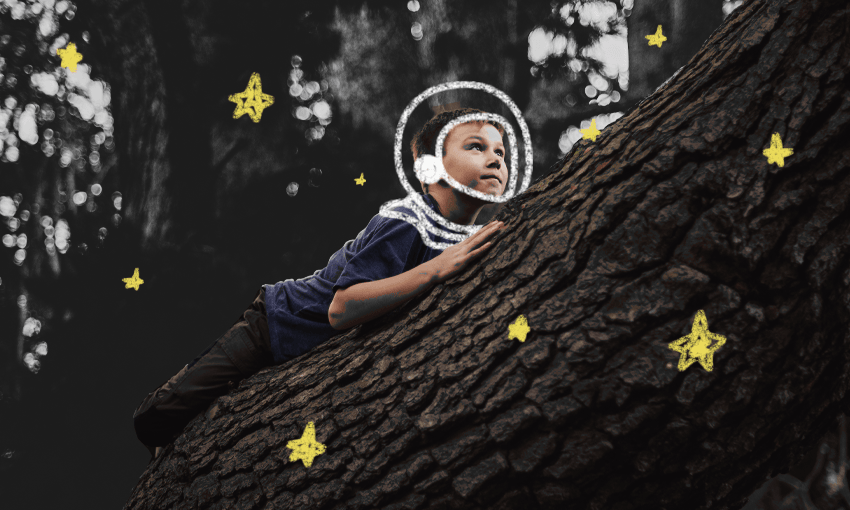 My pūriri: A love letter to climbing trees

They’ve cut down the tree from which I controlled the world.

I saw the gap it left when we were in Napier a couple of weeks ago and we detoured past my primary school. Nostalgia can prove an unsettling indulgence, and I felt physically jolted when I saw that my pūriri had gone.

It probably should have gone decades earlier. Branches used to drop from it seven decades back. Sections of the trunk were rotting. But you can’t comprehend the concept of a tree ageing and dying when you’re nine or ten years old, no more than you can believe it’ll ever happen to you.

Partway up my pūriri, a branch reached out horizontally, dipped, then reached out again. The dip made a perfect saddle. Weekends and holidays, I’d perch there, hidden by the foliage, listening in on conversations as people passed or paused, oblivious, below.

I’d stare across rooftops at the arc of Hawke’s Bay as it swept towards Cape Kidnappers. I’d dream up scenarios where the tree was Mt Everest, and I was saving Edmund Hillary from a crevasse. Or an observation post from which I directed fire on invading hordes as they tried to storm ashore up Napier beach. Or the command desk of a spaceship on which I and my faithful crew were setting out for Alpha Centauri

Other times, I’d see myself doing something equally heroic, involving fair-haired Barbara with the pigtails from our class, or Topsy, who hung upside down on the jungle gym and didn’t care if boys saw her bloomers. A few times, I’d even allow Barabara/Topsy to follow me (adoringly) up Mt Everest or on the mission to Alpha Centauri.

We all have/had trees that were part of our childhoods, don’t we? My wife Beth remembers the clump of little conifers between her house and Westown School in New Plymouth, where she’d crawl in among the trunks, eavesdrop on the footpath exchanges just two metres away, then walk home smelling of resin, and ready for her sick mother to have suddenly, miraculously healed, just because Beth had spent time among her trees.

My favourite cuzzie Joan would sit in a walnut tree by their cowbail, and see herself winning every race at the Puketapu School Sports Day. Her big bro Lyn had tied a rope to a willow branch over the Tutaekuri river, and would launch himself out into the water, scattering the evil Crocodile People just like Rockfist Rogan, Dan Dare and other 1950s comic strip heroes. Add your own memories.

I don’t imagine we ever rationalised or verbalised it at the time, but we felt other rhythms, other awarenesses from those trees. Sun on bark; shifting canopies of leaves with the light slanting through them; the slow creak and flex of branches in the wind. We talked to our trees; kidded ourselves that they somehow recognised us.

Fewer kids have such trees now. They play online instead, or in places where there’s purpose-built equipment, where they can be supervised and safer. Are they missing out? Maybe, just as we’ve missed out on their new range of experiences.

A favourite tree is a place and time of privacy and fantasy, of quiet in an increasingly noisy and distracted world. Twenty-first century kids find it harder and harder to access places and times when you’re alone with your own mind, where you can drift through scenarios, visions, imaginary narratives, all those inner dialogues where we get to know ourselves better.

You’ve probably got protected trees in your neighbourhood: ones with little plaques labelling them as such (I find it a tad ironic that such plaques in our neighbourhood have an oak leaf as their symbols ­– don’t we have any native trees with leaves?)

Why are these trees protected? Usually they’re big, old, handsome. History, aesthetics, shade, help ensure their preservation. And climate change these days: my pūriri probably absorbed about 20kg of CO2 per year. But we don’t usually put protected plaques on trees just because kids like to sit in them or play in them.

Maybe we should. In an accelerating urbanised society of apartments and infill-housing (and I know how both of those can help reduce congestion and emissions), children’s contacts with nature are increasingly diminished.

“I saw death cut down a thousand men / in that tall lovely legacy of wood”, Clifford Dyment wrote passionately in his poem ‘The Axe in the Wood’. When I saw that my childhood pūriri had gone, I felt something like a death in the family. Not just for me, but for other kids who won’t be able to climb and cling and imagine in it.

Today is Arbor Day. Across New Zealand, people will be tending and planting trees for all sorts of commendable reasons. How about we add to these the awareness that you’re planting something which just may become your great-grandkids’ haven and their dreamtime?