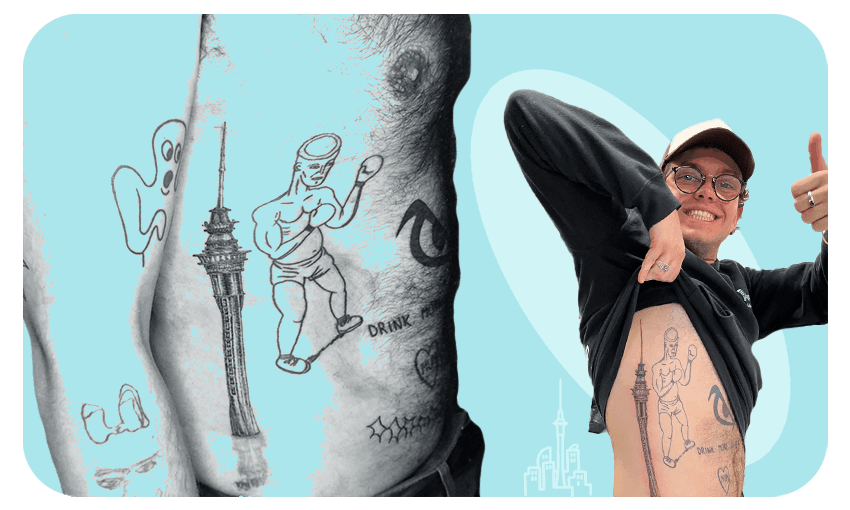 Why get New Zealand’s tallest building tattooed on your torso? Chris Schulz meets one of the small – but growing – number of people with Sky Tower tattoos.

Leo Dashper already has plenty of tattoos. He’s got a lamb inked on his forearm, a dollar sign and an ampersand on his shoulders, and a “spooky little tomato with wings” on his bicep. His biggest and proudest tattoo – a giant Miffy, the rabbit from the popular Dutch children’s book series – fills up his entire back.

He’s always looking for additions. Once, Dashper had a doodle a workmate did on a pad permanently etched on his skin. The production co-ordinator’s ink collection, however, isn’t yet complete. About a month ago, he met a friend on the dancefloor of Soap bar. “He said, ‘I want to do a tattoo on you,'” says Dashper. “I said, ‘Totally.’ We had a chat and decided on the Sky Tower.”

Three weeks later, he’d booked it in. Across a four-hour session, Dashper’s student friend inked the stark grey building, which turns 25 this week, across his right rib cage. He turned down his friend’s offer to add King Kong and jet planes to the top of it. “I vetoed that one,” he says. “I just wanted plain old Sky Tower.”

Still, even without that extra detail, rumours that rib cages are among the most painful places to receive a tattoo, proved true. “It was really uncomfortable and sore,” he says.

He didn’t know it at the time, but Dashper’s tattoo has seen him join a club few others belong to. Not many want, or get, tattoos of the Sky Tower. Across three tattoo parlours called by The Spinoff, two said they’d never done any, and the last said they’d only done two of them – and one of those was tiny.

Despite searching high and low, we could find little evidence of other known Sky Tower tattoos. One, on a forearm, makes a brief appearance early in this documentary about central Auckland. Unfortunately, producers didn’t respond to requests about whose arm it belonged to.

The owner of this chest tattoo, which includes an image of the Sky Tower’s mascot Scotty, turned down the chance to talk, saying he didn’t want his parents to know he’d had the tattoo done in such a prominent place.

Even Dashper admits the building’s a bit ugly to put on your body. “It’s not the prettiest building,” he says, “but I think I’ve grown to like it. I like that it’s grey – it’s quite brutalist. My favourite’s when it rains and only half of it gets wet.”

Dashper, 26, is one year older than the Sky Tower, so he can’t remember Auckland without it. He grew up in Waterview and remembers visiting the Sky Tower’s Orbit restaurant on special occasions, back when it used to be a buffet. “It was classic buffet shit,” he says. “You have the type of food you only get at a buffet: roast veges with butter chicken sauce on top.”

Which leaves Dashper to answer the question no one has yet asked him since he got his fresh ink: why get a Sky Tower tattoo? “It’s just a weird little central Auckland pride thing I think,” he says. “I’m around it a lot. I see it all the time. It’s like yeah, get that.”

It is, he says, a marker, a location, a moment that shows where he was at this particular moment in time. He’s got other friends who get images of Aotearoa, the name of their home suburb, or their area code, tattooed on themselves.

To him, it’s exactly the same. “It’s a building that’s very there,” he says. “I see it every day. I see it when I eat dinner.” And now, he’ll also see it every time he takes his shirt off.