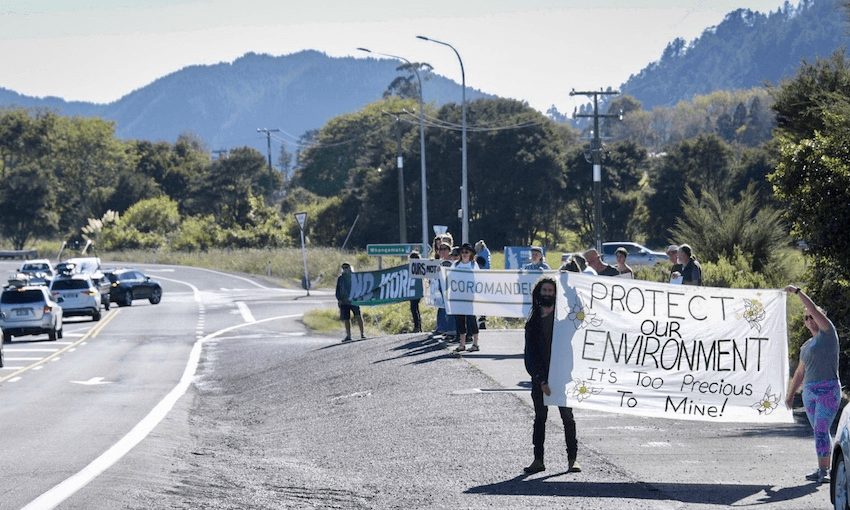 They call it ‘minor and miscellaneous’. We call bullshit

The council’s attempt to loosen the rules around hazardous waste management in Hauraki shows the toxic grip multinational mining has on the region, writes Catherine Delahunty.

Recently I went to speak at a hearing about a proposed Hauraki District Plan change. It was yet another day I will never get back. The proposed plan change items had been advertised as “minor and miscellaneous” but they included a loosening of the rules around hazardous waste management and storage in the heart of Waihi. This was the request of OceanaGold, the multinational mining company that seemingly will not be satisfied until Waihi town is declared a mineral zone and gutted for all its gold, until the mountains of the Hauraki Coromandel have been undermined by tunnels and blasting, and toxic tailings cover the adjacent farm land.

The mayor of Hauraki told me OceanaGold is not the reason for these proposed plan changes. I asked him why else would they be doing this, and he said I would find out later when the decision was made. Not a triumphant moment for transparency in local government, not a minor or miscellaneous moment.

The dictionary says “minor” means “of lesser importance” and, as we all know, “miscellaneous” means that drawer in the kitchen where we dump those used birthday cake candles, bits of wire, keys which don’t unlock anything, string and lids that do not fit jars. Huge holes in the earth are never miscellaneous.

On Good Friday we protested with banners against proposed gold mining under the conservation lands, the mountains and forests of the Hauraki. We stood at the Tairua/Whangamatā Junction on the Kopu-Hikuai Road as endless cars streamed in to enjoy Easter at the beautiful eastern beaches and in the forests.

The reason we chose that truck stop was historical. In the mid 1990s we managed to get a legal ban (part of Schedule 4 of the Crown Minerals Act) on open-cast mining on conservation and coastal land north of the Kopu-Hikuai Road. This huge victory slowed the miners down for a while but now OceanaGold is proposing to use farm land adjacent to the DOC estate to tunnel under the forests behind Whangamatā, home to one of the most endangered frogs in the world. They are also drilling for gold on a farm north of the Kopu-Hikuai line adjacent to the beautiful Puketui forest, a hugely popular recreational area and important native forest.

Judging from a couple of hours of constant toots from the traffic, most people from the cities are not supporters of more mining and they have good reason. Underground mining is a damaging activity. It requires extensive tunnelling, blasting and vibrations that affect the surface. It risks water quality as the aquifers and underground waters can be polluted by toxic heavy metals exposed when gold is mined out of quartz reefs. These underground waters can affect the above-ground waterways, and then there is the toxic waste following the processing of the material to extract the gold. It’s fossil fuels, it’s shaking the hell out of sensitive species, it’s covering farms with contamination  – and for what?

If you want a gold wedding ring, collect 20 old cell phones and ask the companies that can extract the gold (see Mint Innovation in Auckland) to help you out. We really need the government to support this new industry, which can mine e-waste and landfill and recover metals like gold for reuse. Currently we are recycling less than 2% of e-waste in this country, which puts us well below a wide range of countries from Rwanda to Germany. The top e-waste-recycling country in the world is currently Switzerland on 75%.

Overseas mining of e-waste has really taken off and has the potential to replace the destructive effects of holes under or in the earth’s surface. The technology involves the use of a range of new techniques including microbes to turn e-waste into precious metals. It is part of a circular economy, instead of one that leaves a huge legacy of toxic waste that becomes the burden of the tangata whenua and other ratepayers in regions like Hauraki/Coromandel. If the government was a bit more supportive of companies like Mint Innovation, they would be building biorefineries for e-waste in Waihi and Thames, creating good local jobs. Instead Mint Innovation has to head offshore to Sydney and England.

We are also pretty disappointed that the government has failed to ban mining on conservation land despite the 2017 promises and we are very sick of the mining industry being allowed to advance its plans for huge underground mining projects in Hauraki, access given by the Department of Conservation. This dinosaur industrial threat is not minor or miscellaneous, it’s toxic.