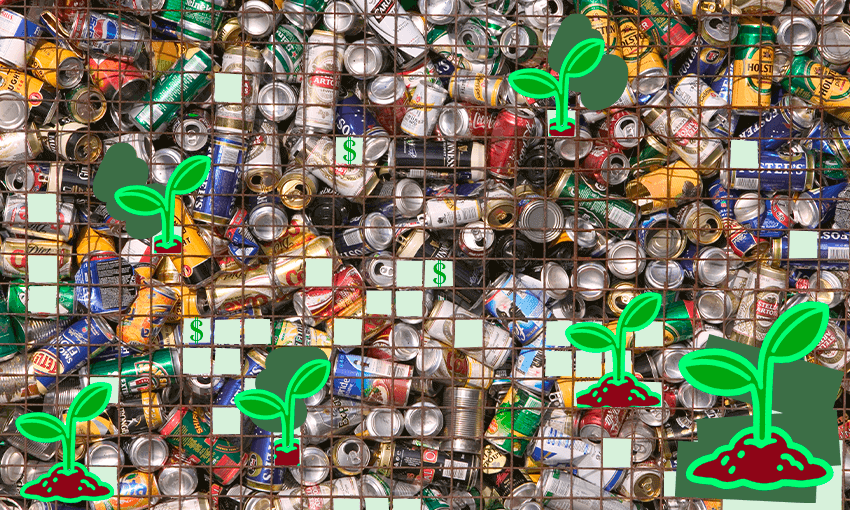 The Ministry for Environment is proposing changes to how we recycle in Aotearoa. What are they, how will they reduce waste, and most importantly – will they make a real difference to the climate crisis?

How we deal with waste in Aotearoa is the subject of a new government policy proposal that is open for submissions now. The “Transforming recycling” policy is part of a broader waste programme run by the Ministry for Environment, which has bringing the country into a “low-emissions circular economy” as one of its key goals. The proposed policy changes include a container return scheme (CRS), a nationally standardised kerbside recycling programme, and a food scraps separation policy for businesses.

But given the increasingly dire picture of climate change, including the recent news of New Zealand’s rising sea levels, what will these policies actually achieve, and is it enough to tackle the crisis?

The proposed container return scheme is designed to address the issue of litter in our environment and to increase the rate of recycling, and is likely to be implemented in 2025. Container return schemes work by adding a deposit to single-use containers such as glass and plastic bottles, cans and cardboard cartons. The deposit, proposed to be set at 20c in New Zealand, is then refunded when the container is returned to a depot. Additional non-refundable costs associated with the scheme are projected to be around three to five cents a bottle, and the costs passed onto the consumer will vary from product to product.

Up until the 1980s, New Zealand and other countries had similar schemes run by beverage companies themselves, as the bottles represented a significant investment that could be recovered for reuse. As single-use plastic and glass manufacturing became cheaper, incentives to recover and reuse glass containers decreased.

In a press release, sustainability advocacy groups Zero Waste Network and The Kiwi Bottle Drive said they supported the proposed CRS, but opposed the exclusion of fresh milk containers as it “gives the dairy industry an advantage and is unfair to other beverage producers”. The groups have received over 2,500 submissions concerning the policy, but say more are needed to “combat the political clout wielded by the dairy and beverage industries”.

Under the proposed policy, fresh milk containers would still be eligible for kerbside recycling, but Sue Coutts from the Zero Waste Network said that’s not good enough. “Container return schemes give responsibility to beverage producers and consumers to deal with the containers they sell and consume… New Zealanders use about 183 million milk bottles every year, including in cafes, restaurants and workplaces. Leaving out dairy milk is nonsensical, and it creates an unfair playing field for other kinds of milks.” The Zero Waste Network currently has a template submission available for public use on their website.

Standardising accepted materials for kerbside recycling is another proposed policy from the Ministry for Environment. Currently, different jurisdictions have individual standards for kerbside recycling, which may lead to confusion, which in turn reduces the quality and quantity of recycled materials. Currently, New Zealand only recycles 28% of its waste, which environment minister David Parker calls “inadequate” considering leading countries recycle over 50% of their waste. The proposed policy aims to reduce recycling contamination and allow businesses to design their packaging in line with available recycling programmes.

The proposal to standardise recycling includes paper and cardboard, plastic bottles and containers numbered 1, 2 and 5, as well as aluminium and steel tins and cans, and glass bottles and jars. The proposal was drafted based on what councils already collect, available sorting technology and sustainable end markets. Councils will be required to set targets and report on their progress.

Each year more than 300,000 tonnes of food waste are sent to landfills. In the anaerobic or oxygen-poor environment of landfills, organic waste rots and releases methane, the same potent greenhouse gas associated with agriculture. According to the Climate Change Commission, emissions from landfills need to be reduced by 40% by 2035 to meet our agreements on the Kyoto Protocols; it’s hoped this new policy will help to achieve that target.

But although these policy changes are a positive step, many groups believe they don’t go far enough to amount to meaningful climate policy. Miranda Mirosa is chair of New Zealand Food Waste Champions 12.3, a coalition of food supply chain participants who want to halve food waste by 2030. She says the draft policies don’t go far enough to address issues of surplus food production, asking “what good is separation if surplus food and waste isn’t reduced overall [and] isn’t getting to Kiwis who are living in poverty and need food for their families?

“What’s the true impact… on how we use our resources, on emissions created from production, transport and diversion? It doesn’t influence upstream behaviour which is where we need to see true change.”

Jessica Berentson-Shaw, a social scientist, policy expert and co-director of Wellington think-tank The Workshop, agrees. She believes there’s an education gap when it comes to public communication about effective climate policy.

“There’s a lot of people who think that maybe effective climate action is either recycling, or buying an EV… recycling is really important [but] what are we doing at the upstream level to prevent a lot of packaging that gets produced?”

Still,  Berentson-Shaw  calls the proposals “a genuine attempt to create a more supportive environment for waste-reducing”. The important thing about the policy is that it gives people more options to reduce and recycle waste, she says,  an essential aspect of the “enabling environment” that effective climate action requires. In other words, the systems around us need to enable people to make sustainable choices.

She cautions that framing of policy like recycling reform is often misleading; people may assume improving our recycling rate constitutes more significant climate change action than it really does.

For example, while household and business food-waste collection will reduce landfill emissions, solid-waste emissions account for only 3.3% of New Zealand’s emissions profile. By comparison, transport accounts for 30%, and agriculture for a whopping 50%.

What about the statistic that found beverage containers account for 24% of all litter in New Zealand, and the CRS will keep more than 85% of beverage containers out of landfill? That’s a diversion of 20.4% of all litter. The National Litter Audit in 2019 found that total litter in New Zealand was over 200 million litres, which means that 211,198,579 litre of litter will go unaddressed.

“We’ve severely under-predicted the effects of climate change,” says Berentson-Shaw. Although it’s a grim outlook, she believes there’s a silver lining: momentum around the climate crisis is an opportunity to deepen public understanding. The more conversations we have around climate policy, the more support we can build around effective system overhauls for a greener economy.

“We’ve seen that crisis is an opportunity for change.”

Submissions on Transforming Recycling are open until May 22