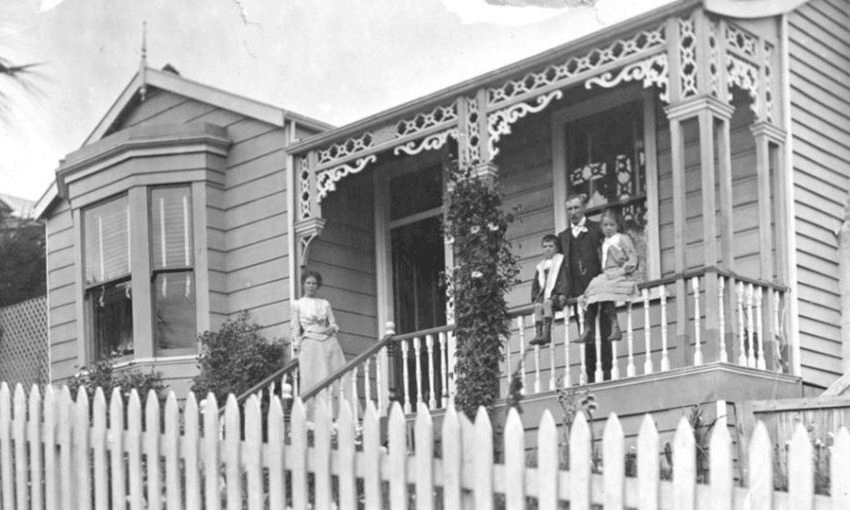 A family and their home in Dunedin (author’s collection)

A family and their home in Dunedin (author’s collection)

Many of today’s concerns around home ownership and urban planning were found in centuries past, writes Jeremy Moyle

Current anxieties about city planning and the possibility of home ownership can seem like particularly modern issues, but their origins are old – really old – and the concerns of 19th and early-20th century New Zealand sound remarkably similar today.

The potential for property ownership was a central motivation for Pākehā settlers to migrate here from Britain since as early as the 1850s. Having your own house and land was imagined as a form of independence from the perceived oppression of a selfish and entrenched rentier class back “home”.

Many arrivals got the land they wanted. By 1916 just over 53% of the Pākehā population lived in their own homes. In comparison, just 10% of dwellings in England and Wales were owner occupied in 1914.

This situation was helped along by property prices that were absurdly low by modern standards. To take one example, in 1868 a quarter-acre section advertised in Dunedin – then the second-largest city – cost just £16.

How affordable was this? A carpenter at the time could potentially earn that amount with slightly over month’s work. Today the median house price in New Zealand is around $560,000, about 10 times a carpenter’s average annual salary.

However, not everybody was able to find steady employment with decent wages. Many of the poorest in society also lived a transient lifestyle, following jobs wherever they might appear around the country. Home ownership was out of reach or made little sense for these individuals and families.

A variety of rental accommodation catered to their needs. Private homes leased rooms, boarding houses were ubiquitous, and hundreds of basic rental cottages were constructed en masse by property developers or crammed into back yards by homeowners wanting to earn some money from their land.

Rentals like these became a lightning rod for public criticism. The density of some urban developments, coupled with the frequent absence of reticulated water and sewage systems, and the flammability of New Zealand’s timber houses, raised public health concerns.

Some urban areas dominated by cramped rental housing were ultimately decried as slums and – in the eyes of the Victorian and Edwardian commentariat – thought to foster immoral behaviour: crime, the mixing of sexes, the breakdown of family life.

To be clear, not all rentals were considered slums, and not all slums were comprised of rentals, but there was a strong association between these two classes of housing.

Not only was the idea of rental accommodation ideologically unacceptable to a large proportion of the population who had emigrated with the promise of land ownership, the public discourse also cast rentals as a serious danger to New Zealand’s social fabric.

The Kiwi dream was imagined as the solution to this early form of “housing crisis”, and the domestic ideal crystalised into a private, detached, and owner-occupied home in the “healthy” suburbs, away from the worst excesses of high-density urban life.

This idealised suburban home ownership became the genesis of modern New Zealand’s sprawling townscapes. Initially the low-density development was facilitated by the instillation of early public transport routes – utilising trains, trams, and cable cars – but later in the 20th century this was super-charged by the arrival of affordable cars.

Echoes of these historic ideals remain even beyond their physical legacy. Given the regular angst expressed in the media about housing affordability, the Kiwi dream seems as strong now as it was in the 19th century. The genuine concern over the ever-fading possibility of home ownership for many shows that it is still a core desire, even though property prices are not what they were in the 1860s.

Furthermore, the modern aversion of some to high-density housing schemes sounds remarkably similar to the historic criticism of rental “slums”. The planned Unitec development in Auckland is the most obvious example of this, quickly labelled a “dump” by Mike Hosking, a “slum” by Cameron Slater, and compared to Mumbai by Mathew Hooton.

The historical depth and continuity of New Zealanders’ attachment to home ownership and suburban housing suggests that abandoning these ideals will be a bitter pill to swallow. Unfortunately, it seems that many of us may simply have to accept the reality that we are a part of Generation Rent, and that – in Auckland at least – a functioning urban environment requires the development of high-density housing rather than the addition of more commuter suburbs.

However, the important thing to take away from this brief history of New Zealand’s housing ideals is that they are to a large extent a product of past attitudes, and there is no reason that we necessarily have to accept them today.

Instead we must be pragmatic and forge new ideals that will support us into the future. Let us embrace high-density housing as a more efficient and environmentally friendly use of space. And abandon any sense of inferiority that might be currently associated with renting.