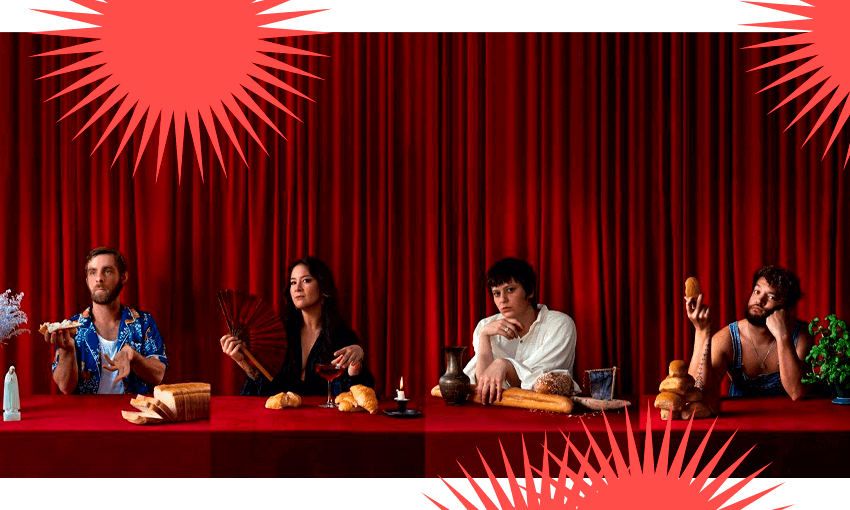 After a pandemic’s worth of postponements, Silo Theatre finally gets Break Bread in front us, from behind a screen. Here’s what four of our writers thought.

Chaotic and cheeky from start to finish

Three cigarette-smoking aunties in robes are “gutted, actually” at the death of their children during the Plague of the Firstborn, the origin story of the Jewish Passover. Incongruous accents in a very inappropriate reenactment of the eruption of Mt. Vesuvius heighten the chaos of the show. Break Bread is cheeky from start to finish and, at many points, inappropriately funny – my laughter was often accompanied by a pang of guilt when I remembered what exactly it was that I was laughing at.

The intersection between my own chaotic work-from-home life and that of the scenes playing out inside my screen only added to the comedy of the experience. Just as I began mixing flour and water in my hands as instructed, my property manager arrived for an inspection. He surveyed the state of my walls and floors while I created a tiny ball of water and flour in my left hand.

Many often lament that the intimacy of theatre is lost when the experience is intermediated by screens. Break Bread proves them wrong, creating a playful exchange between performer and audience, who somehow end up in each other’s homes. Theatre in a time of pandemic restrictions means borrowing techniques and conventions from both stage and screen, and this is done extremely well here.

It’s near-impossible to view this show without feeling a huge sense of empathy for Aotearoa’s Covid-ravaged creatives – or being moved by their persistence. Break Bread is a truly funny reflection of the horrors of lockdown through the lens of disasters both everyday and historical. So too is it a reminder that comedy – like the simple act of baking bread – is a necessary balm in a chaotic world.

Life is absurd. That’s what the team at Break Bread have captured with their triumphant and increasingly chaotic performance. From the start, the team blends together theatre and screen conventions to produce a unique experience, with a timed countdown reminiscent of old Hollywood movies. Break Bread manages to walk the line between theatre and screen at every turn, utilising split screens, ingenious use of lighting and set design, and fourth-wall breaks. They retain the feeling of a live performance with unexpected “character breaks” that bring a sense of chaos to the piece. But make no mistake, every frame is meticulously crafted, and although the loose episodic structure is disorientating, by the end the viewer suddenly finds the narrative wrapped up in a bow.

It’s an interactive experience too, and that helped to bring a palpable sense of connection through the internet. My flatmates and I, wired after a long day at work, found ourselves tricked into a calming meditation as Scotty led us through tactile exercises. But Break Bread is anything but straightforward, and as the scene slowly collapsed, the increasing chaos literally spilled over from their world to ours; our glass of water tipped over a pile of clothes.

Confronting, confusing, unique, hilarious and intensely relatable, Break Bread will make you feel a little bit less alone. Now, more than ever, Break Bread proves the urgent and essential nature of the arts.

Silo Theatre’s Break Bread asked me to scoop a quarter cup of flour into a bowl, fill a glass with water, dampen a tea towel and turn on a lamp in lieu of lighting a candle. It took less than five minutes, and I plonked myself down on my couch at 8.30pm, pressed play on my laptop and watched the 70-minute show.

It soon became clear that this was a show full of irreverence, wit and Kiwi ingenuity. In a retelling of the Titanic disaster, crinkly blue tarpaulins represent the Atlantic Ocean and cardboard boxes stand in for the sinking ship. I learned the ship’s baker, Charles Joughin – here “played” by a toilet roll – was one of the last people atop the vessel as it plunged down into the sea; he somehow survived the frigid water and was later rescued. In a section on the eruption of Mt Vesuvius, the makeshift togas, clipped together with clothes pegs, may have said “Pompeii” but the mix of hilariously inaccurate accents meant I was travelling the world in search of the tourist attraction.

The pandemic has been tough on everyone but especially our creatives, and in that context Break Bread is a clever commentary on their current predicament. The four actors are “working” from their homes where flatmates interrupt monologues and couriers knock on doors. As I watched the play on screen, in the next room over knives, chopping boards and pots crashed noisily as my partner washed the dishes. It was perfect timing: at the same time I was being gently instructed to “feel the water molecules hydrating the proteins” as I mixed the quarter-cup of flour I’d been told to bring with water from my glass. Admittedly I didn’t follow the instructions at all and that’s on me, but it was enough just to hear that I could have squashed my little ball of dough in my hands and tell myself: “I am enough”.

Whether recorded or livestreamed, a virtual production like this can never replace the real deal – and nor should it. But Break Bread demonstrates that, with gumption and a “go hard or go home” attitude, a theatre show can keep audiences entertained, all from the comfort of their couches.

High energy, shot through with melancholy

For all of the humour and high energy of its sketches and scenes, Silo Theatre’s Break Bread left me feeling unavoidably melancholy. I love these performers, I love this theatre company, and I love the passion and fervour that goes into staging a production like this. But with all that said – I so wish I could have seen this in a theatre.

That might read like a slight on the show, but it’s this melancholy – this sense of loss – that Break Bread is tapping into. Whatever it was meant to be originally, it’s now a show about the pandemic, and the spectre of Covid-19 seeps into every moment of this digital production. Whether it’s the initial framing of the show by all four actors on their respective screens, or the ramshackle nature of Freya Finch’s Titanic props, or the very relatable, quiet mania of Scotty Cotter living alone, this is a show that is telling a story about getting through by whatever means necessary.

The seams do reveal themselves: the scale of the performances don’t always match the size of the frame, some sketches stumble over the finish line, and the connecting tissue between themes and scenes isn’t as tight as it could be. However, what initially felt awkward – like the initial Israelite scene which longs to be told by performers in a room with an audience – eventually won me over through sheer chutzpah. After postponement, after redevelopment, after over 100 days in lockdown, Silo got the thing done. Break Bread didn’t come through it unscathed, but the show is on, it’s out there, and it’s ready for an audience to lap up, and hopefully see a little bit of themselves in.

Now I want to see what they can do next year.