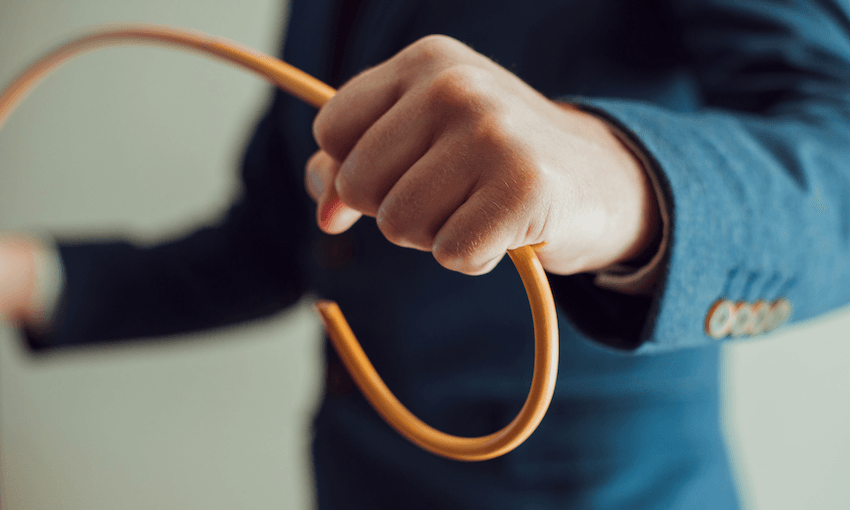 When we caned children

The first: a whole lot of years back, when I was a teachers’ college student observing for three weeks at a boys’ high, a teacher ordered me to witness a caning. It wasn’t some bizarre part of my professional development, but a cover against complaints from tiresome parents. I was too junior and too timorous to object.

I don’t know what the boy’s offence was. The teacher hit him fiercely, savagely almost, three or four times across the backside with one of the whippy lengths of basket-making cane you could buy from The Blind Institute in those days. I remember the boy crying out in pain. I remember also the look of distress and reproach he aimed at me as he left the room.

Fast forward a decade, and that teacher was principal of a different school. There’d been issues with a couple of boys. He caned them, too. One lunchtime, they hid in the foyer. When the principal appeared, they shot him dead.

Narrative the second: one Saturday a few weeks back, a group of teens went swaggering, swearing, spitting through some public and semi-public premises in our CBD.

It sounded silly and provocative, stereotypically adolescent. Over the next few days, talkback callers and letters to the editor reckoned the little scumbags needed “a good clip over the ear / good boot up the backside / good smack in the chops”. Anything, provided it was corporal punishment and therefore – yes – good.

I’m familiar with the “never did me any harm” school of thought. My usual reply is that the experience presumably helped turn the speaker into the sort of bore who delivers such utterances.

I’m also familiar with stories – usually told in tones of admiration – of teachers caning an entire class after an offender failed to own up, a principal doing the same to a boy in front of the school assembly. Perverted justice and public flogging are apparently good as well.

And I know the arguments in support of corporal punishment. It’s clear, quick, “effective”. It’s a deterrent. It’s time-efficient, even.

It’s also abusive and brutal, often unfair and unsuccessful. It encourages aggression. It fits most dictionary definitions of torture. It makes the recipient an object to be dealt to, instead of a subject to be dealt with. It’s an ultimate form of othering.

And it’s grotesque. An adolescent boy is made to bend over, thrust out his buttocks, endure an assault on them. (You’ll have noticed how this article is restricted to one gender. Girls didn’t get caned, which may have been a perverse form of sexism.)

I hit boys during my high school teaching life. It happened mostly in the first couple of years, as I struggled to find ways of controlling a class. I’d rebuke noisy kids. I’d give the girls lines (another silly, unproductive punishment). I’d warn the boys that if they didn’t pay attention…

If – make that “when” – they still didn’t, I’d take them out into the corridor and cane them. Just one or two strokes; I couldn’t bear to  inflict more.

They’d wince, gasp, swagger back into the room, making a point of showing that they weren’t in any way cowed. I’d come back, too, facing a class who wouldn’t look at me for the rest of the period. My stomach would churn and my hands would shake for the next hour.

It happened maybe 10?…12? times during my decade-plus as a teacher. It was desperate stuff: an admission that all else had failed. As I learned to make my lessons a degree more interesting; learned also better control techniques such as humour, flattery, diversion, I managed to do without it. I’m hugely grateful that my gentle son and equally gentle grandsons went through high school after the 1989 Education Act made caning illegal and NZ secondary schools lost some of their fear.

When you’re an ex-teacher, 15-year-olds who’ve somehow become 45-year-olds come up to you, going “Mr Hill! Remember me?” Only once has such a voice said, “You caned me in form etc, etc.”

I apologised; said how I hated doing so. He nodded; went “I got over it”. I hope he was telling the truth.

Here’s a third narrative to finish, about he whom I’ll call Zac. Zac was an… ebullient presence in my class. I liked the 14-year-old, but all my hard-learned control techniques barely kept other pupils and the furniture safe from him on bad days. I didn’t cane him; was determined not to. As welfare agencies told us, he’d already been belted innumerable times at home.

Years later, my wife Beth and I were downtown when a figure hailed me with “Mr Hill! Remem-?”

I did. “Hey, Zac. Good to see you.” He beamed. I introduced him to Beth, who as another ex-teacher chatted easily away to him. Zac beamed more. We heard about others from his class, the warehouse job he’d had till he told the foreman to stick it up his – sorry, Mrs Hill.

It was a good, warm exchange; we were all smiling. Abruptly, Zac glanced at his watch. “Shit! Gotta go, sorry. Due in court in five minutes!”

OK, Beth and I agreed as we moved on, Zac might be appearing as an expert witness.

Talkback callers and correspondents to the editor will know that a good clip / boot / smack from me would have set Zac on some mythical straight and narrow. But to borrow from his vocab, shit, I’m so pleased I never did it.