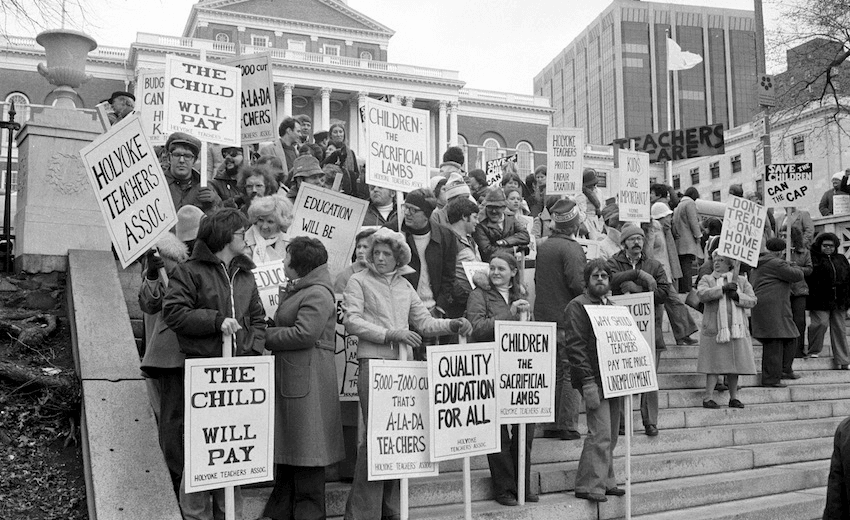 Teachers hold signs and march together during a strike protesting for better working conditions, Boston, 1969. (Photo by Spencer Grant/Getty Images)

Why are teachers striking? It’s about a lot more than money

Teachers hold signs and march together during a strike protesting for better working conditions, Boston, 1969. (Photo by Spencer Grant/Getty Images)

We look at the primary school teacher strike: why are they striking and what are they likely to get?

On August 15, offices around the country will likely have school kids running around. That’s because that day an all-day primary school teacher strike is scheduled. Primary teachers will be marching across the country (but mainly at Parliament) to ask for a range of changes to how classrooms are run and how they’re funded.

What exactly do teachers want?

Essentially teachers went into negotiations with four main claims to address all of the concerns they’ve had over a number of years. They’re asking for support for children with additional needs, a career framework, time to teach and time to lead; and a pay jolt across the board.

So they want more money?

Well, it will likely be reduced to that in a lot of coverage. Teachers are asking for a 16% pay jolt across the board because they want to attract and recruit great teachers. They say they’re losing amazing teachers across the board because the hours are so long and the pay is too low. Our very own former Spinoff staffer Simon Wilson wrote a fantastic piece for the NZ Herald about this very issue: “…make teaching a prestigious profession. Who doesn’t support that? Make teaching a job that the best and brightest school students with an ounce of public service in them will queue up to do. Maybe not for life, but for an excellent first 10 years of their career. How would we achieve that? Start with pay rises, steep enough to reposition – to recategorise – the job among the higher-paid professions. Far steeper than is being proposed now.”

But actually, it’s not all about pay is it?

Not at all. Teachers are asking for “time to teach and time to lead”. Teachers are putting in a phenomenal amount of unpaid hours each week with some teachers working 50 to 60 hour weeks and not being paid any more than their 40-hour salary. They want to increase the teacher:child ratio for years four to eight, currently funded at 1:28, in order to achieve smaller class sizes (for more one on one time with children) and more teachers to share the overall workload. Teachers are also asking for an increase in classroom release time so teachers can carry out assessment while released rather than at the same time as trying to teach a class. And they’re calling for more time to plan their lessons and evaluate how their students are doing.

What about children with additional needs?

Teachers are asking for a Special Education Needs Coordinator funded and trained at each school to support at risk or high needs children.

What is this stuff about a career framework?

Teachers are telling the public there are inequities in the current system and also that we need to recognise and remunerate specialist teachers such as Pasifika and Te Reo Māori immersion teachers.

So what has the government offered them?

The government has come back with an offer of 2.6% over three years for 84% of teachers, with a larger increase for new graduates and beginner teachers and an increase of two hours per term classroom release time – around 12 minutes a week. NZEI believes that offer does not deal with workload or support for at-risk children and special education needs coordinators in schools.

How do teachers feel about the government’s offer?

In a nutshell, they’re disappointed. They say they have been doing their best during the funding freeze and cuts under the past government and argue that the current government acknowledged the funding deficit during the election campaign and promised they would put it right. They also warn that a teacher crisis is looming, and they could be right there. Between 2010 and 2016 there was a 40% drop in Initial Teacher Education enrollments; around 40% of teachers leave before their fifth year of teaching because of low pay and heavy workload. Meanwhile, baby boomer teachers are nearing retirement. It could be a perfect storm.

So are they going to get a better offer by striking?

Who knows, but Deputy PM Winston Peters said on The AM Show that the teachers’ decision to strike for the first time in 24 years was “hugely disappointing”. He also said: “It’s not going to get them anywhere.”

If parents want to support teachers what can they do?

They can come to the strike – teachers would love to see parents supporting them – or they can check out the NZEI website to get involved in other ways.