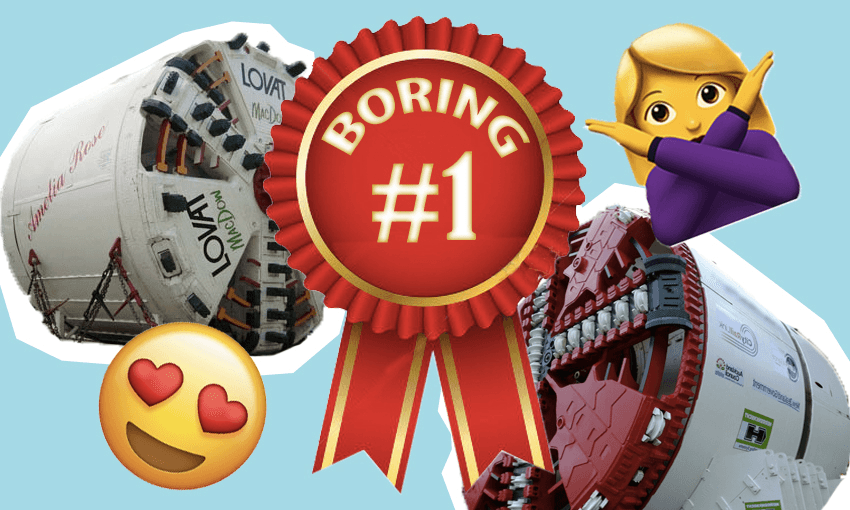 Summer reissue: In an effort to bring The Spinoff’s favourite format – the ranking – to its knees, Alice Webb-Liddall ranks the most boring thing she can think of: borers.

If something is to be named after me when I have passed away after a lifetime of goodwill and national recognition, I would want a high-density housing block or a community garden. A tribute in the paper would probably do me just fine, or even nothing. I would appreciate nothing over having tunnel boring machine named after me. It’s the fate that befalls so many groundbreaking (sorry) women, some real and some fictional, whose names are repurposed for these cylindrical earth movers.

According to mining.com, the patron saint of mining was a woman, Saint Barbara, who was locked in a tower and executed by her father in the third century for secretly converting to Christianity. According to lore, God then struck her father down with lightning and she became the patron saint of a lot of industries that rely (or used to rely) on explosives. So now, boring machines around the world are bequeathed with names like “Big Bertha”, “Meg” and “Joan”.

Because it’s a custom I personally dislike, and one that’s personally affected my confidence as an “Alice”, here’s a ranking of New Zealand’s recent strong-lady boring machines from worst to best, based not on merit, but on vibe.

As if Alice the Camel wasn’t enough fuel for ridicule as I slumped my way through primary school, in 2013 the boring machine set to tunnel its way through Waterview was named Alice. Alice weighed “as much as 750 elephants” and had “a top speed of eight centimetres a minute” and it hurt my feelings.

The name was suggested by a nine-year-old boy as part of a competition, his reasoning being that Alice in Wonderland fell through the hole into Wonderland. Similarly to how he thought Alice the borer would manoeuvre through the ground. Not to take my anger out on a nine-year-old, but that’s not how borers work and neither ends of the Waterview tunnel are anything like Wonderland. (Also I can move faster than eight cm/min and I weigh less than ONE elephant so shut up).

Jeffie is not a name I’ve heard before, but according to the Auckland Council it was popular in the early 1900s, probably in somewhere like France. The Our Auckland website says the name was chosen after a public poll in which “thousands of people voted ‘Jeff’ based on the popular meme ‘My Name is Jeff’ which was a line used by the character Greg Jenko in the 2014 action comedy film 22 Jump Street”.

This borer is the second-worst because of that quote alone. The competition happened at least four years after 22 Jump Street was released and “my name is Jeff” was funny for about a week. (Sidenote: while “my name is Jeff” is no longer funny, “my wife” from Borat, 2006, has come full circle and is funny again. I don’t make the rules.)

At this point I’m confused about the criteria for naming borers. Alice was named by a child, Jeffie a public poll, and Amelia Rose after the daughter of the tunnel’s project manager. It’s kind of cute that he dedicated this huge machine to his three-year-old, but if you’ve ever tried to get a three-year-old child to focus on a slow, sustained activity, like digging a massive hole underneath the harbour, you’ll realise this might not be the good omen he thought it would be.

Piper was named by a group of seven-year-olds from Snells Beach School because it looked like a pipe. I’m not a huge fan of boring machines, but I honestly believe a machine so powerful deserves a better name. If it was up to me I would call it something like Traci, because that’s my mum’s name and she’s a school principal with a death glare that could definitely bore a hole through a hill.

Named after the Matariki star that takes care of people’s wishes, dreams and aspirations in the Māori new year, Hiwa-i-te-Rangi seems to me a bit of a strange choice for a tunnel borer. According to Watercare the name was always going to be a Matariki star, and Hiwa-i-te-Rangi came out on top of a poll of local students. Maybe those students wished for a new hole in the ground for their Māori new year, or maybe they just don’t know what they’re talking about. My boss’ cat is called Cutie because his daughter got to choose. I think we should stop letting kids name things.

At 80 years old, Dame Whina Cooper led a march from her home in the Far North to parliament in Wellington in protest of the continued loss of Māori land. She is one of the most significant historical figures in the fight for Māori rights and now she is a tunnel boring machine about to chomp her way through the ground under central Auckland. Is it a legacy she would have expected to leave? No, probably not, but if her own spirit and stamina is anything to go by, this borer’s gonna bore good and steady.

Nobody will ever name a tunnel boring machine after me, and that’s OK. In many ways I already am a boring machine. If you’ve read this far, you probably are too.