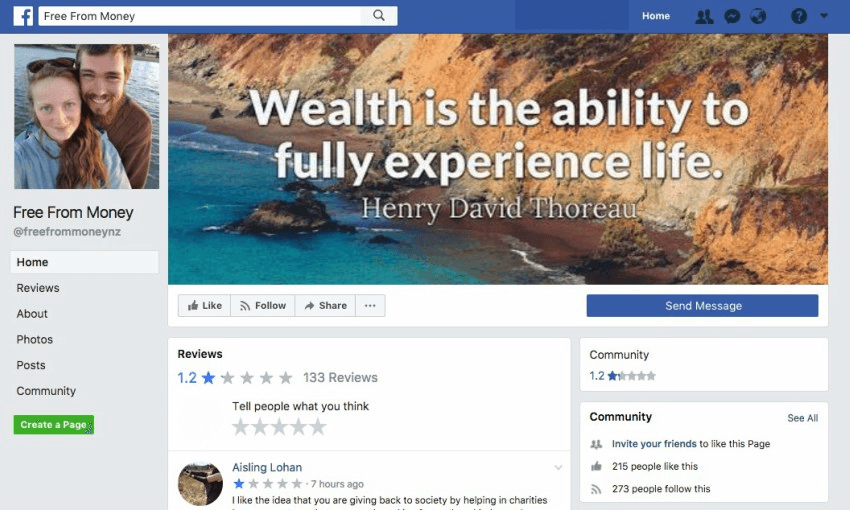 Eat at the soup kitchen? Why stop there?! 10 more money saving hacks for the frugal traveller

A pair of tourists have sparked outrage after admitting to eating at the Sisters of Compassion soup kitchen in Wellington to save money. Madeleine Chapman presents a few more money saving tips for tourists.

On Thursday Stuff reported that a couple of tourists (a tourist couple), Enoch and Anna, have been travelling New Zealand living ‘Free From Money’ and surviving off the kindness of strangers. New Zealanders are notoriously charitable, just ask any New Zealander who’s walked past a homeless person and not avoided eye contact. We’re saints.

Enoch (Australian) and Anna (German) are on a mission to travel New Zealand without spending a cent. They have money for emergencies but are doing their best to survive solely off the kindness of strangers. Their travel hacks include hitchhiking, couchsurfing, dumpster diving, and eating at the soup kitchen. Yes, get to know the local homeless population by eating a free meal next to them with your “back-up cash” in your back pocket.

“Your taxes get taken from you if you want it to or not and distributed to many places… if you really want to be angry at somebody, don’t blame us – blame the system.”

After some deep thinking while sleeping overnight at my office desk (is that a money-saving hack?) I realised they’re right. Blame the system then game the system, that’s my new motto. And there are even better hacks than pretending to be homeless at the soup kitchen. Try these out next time you’re on the road!

A friendly map of New Zealand shows the exact locations of trees whose fruits are available for public consumption. All you need is access to the internet which, if you’re truly living Free From Money, you won’t have. But don’t worry, just ask someone on the street to look it up on their phone. Then ask them to take you to the address. Then ask them for a couch to sleep on. Keep going until they’re forced to walk away.

Man, kids waste so much food! Every lunchtime at every school, kids throw away perfectly good sandwiches and crackers because they don’t understand how the system works. Head to the nearest primary school and loiter around the gates at lunchtime asking for kids’ spare chips. Honestly, their parents will probably thank you.

The only sure things in life are death and taxes. Taxes, as we now know, are bad. But death can be great if you’re looking for a free mini mince pie and some paper plates. Hang out at church and sooner or later there’ll be a funeral service. And after the funeral, there’s the after-funeral. Hunger isn’t in the five stages of grief so there should be plenty of food for your wise, frugal self.

Look, everyone has food in their pantries. Even poor people have something in their fridge. And most of these people go to work during the day because The System demands it (ugh when will it end?!). While they’re out, just walk into their homes and take some food. It’s so simple it’s almost laughable. Why didn’t anyone think of it before? Better to ask for forgiveness than permission amirite haw haw haw.

No Samoan ever had the idea to show up in New Zealand and try to live off the kindness of strangers. That would make him valea. Be white, have a big backpack on, and you’ve got yourself a fast pass to Kiwi charity.

Do less work than you advertise

Anna and Enoch insist that they have been volunteering but also that their volunteering starts today (after the article was published). This is a great hack that we could all use to save money. For example, this list was advertised as ten money saving hacks but is in fact only eight.

My last money hack is to hack someone to death. Turn yourself in and you’ll be placed into custody immediately. That’s three square meals every day and even your own bed. If you’re really determined to travel to another country and live off their people and land without contributing anything in return, why not go all in and just become a dependent of the state. Like Anna and Enoch said, don’t blame them, blame the system.