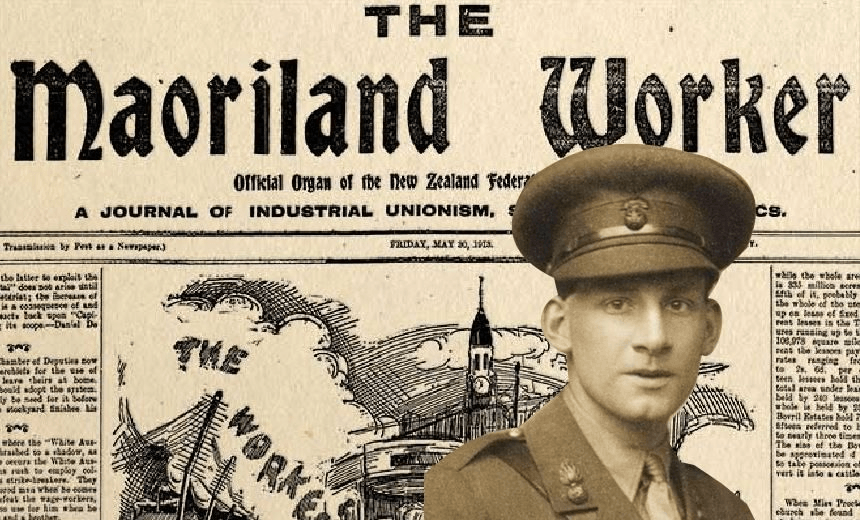 The Maoriland Worker and Siegfried Sassoon

Here is the poem that got a newspaper prosecuted for blasphemy. Will the NZ government act again?

The Maoriland Worker and Siegfried Sassoon

Many, including the PM, were surprised this week to learn that blasphemy remains an offence under NZ law. The one and only case of prosecution dates from 1922, when John Glover was prosecuted in the Supreme Court for republishing in his paper the Maoriland Worker the anti-war poem ‘Stand-to: Good Friday Morning’ by Siegfried Sassoon …

I’d been on duty from two till four.
I went and stared at the dug-out door.
Down in the frowst I heard them snore.
“Stand-to!”   Somebody grunted and swore.
Dawn was misty;  the skies were still;
Larks were singing, discordant, shrill;
They seemed happy;  but I felt ill.
Deep in the water I splashed my way
Up the trench to our bogged front line.
Rain had fallen the whole damned night.
O Jesus, send me a wound to-day,
And I’ll believe in Your bread and wine,
And get my bloody old sins washed white!

The decision in the trial includes instructions to the jury from the judge, Justice Hosking. These are some excerpts:

“You must address your minds as to whether, according to the popular use of the English language, this poem is couched in language of insult and contemptuous irreverence to the subjects with which it deals – Jesus Christ and the Doctrine of Atonement.”

“I take it that we have not yet reached the stage of what was termed ‘growing toleration’ to allow whatever abominable or filthy language may have been used in the trenches to be published in a printed book in order that people may have a true account of what went on there, any more than an individual, in order that he may give a realistic picture of the inside of a madhouse, should transcribe the abominable language used by its inmates.”

“The reason that these matters are made the object of prohibition is that if they were freely allowed there would very likely be disorder produced in the community by the strong feelings that would be stirred up finding vent in violence, so that it is not for the protection of these things.”

The jury retired and, after a brief deliberation, found Glover not guilty, but with a rider that “similar publications of such literature [should] be discouraged”.

Thanks to Graeme Edgeler for his help with this story.