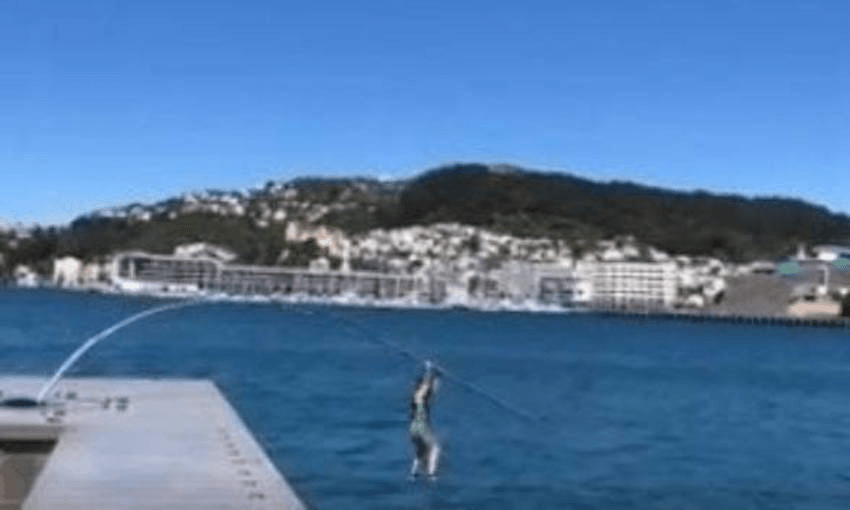 How on earth were you bored, Hunter?

Wellington resident-cum-vandal Hunter Macdonald claims he was bored out of his mind when he came across Len Lye’s Water Whirler sculpture and broke it. Madeleine Chapman and Sam Brooks discuss.

Hunter Macdonald had a day off yesterday. So like all 28 year old adults, he decided to climb a piece of art in public. That piece of art was the Len Lye’s Water Whirler, a beloved sculpture that’s graced Wellington’s waterfront since 2005.

Macdonald told Stuff that he was showboating. “A crowd started to form, sort of egging me on, I think they enjoyed watching it…Before I knew it the sculpture snapped so suddenly, came down hard on my head, sent me into the water.”

Watching the video of Macdonald breaking the sculpture angered me. His explanation didn’t help.

“I’ve always enjoyed an audience, I do like an audience. With the people there I felt the need to give the people what they want.”

This type of reasoning would perhaps be acceptable from a 13 year old. Macdonald is not 13. If you want to climb stuff and be cheered on, go join a Crossfit gym. YOU’RE TWENTY EIGHT YEARS OLD.

In a separate interview filmed by a PR person, Macdonald displayed a penchant for speaking about himself in the third person. “I seemed to attract a bit of an audience – Hunter Macdonald loves a good audience, he’s a bit of a showman – and I started to test the limits of the metal sculpture.”

My anger turned to fury.

“They were throwing big figures at me, ‘that’s a hundred thousand dollars, that’s taxpayer money’, figures that I couldn’t even fathom. I’m never going to receive a pay cheque of that magnitude.”

I sincerely hope the council chases up the reparations for the damage Macdonald caused to the sculpture.

Macdonald once owned a food truck called Meatballers. Printed on their food truck was “you’ve missed our meat, don’t ball your eyes out.” That the person who came up with that slogan is the same person who climbed a piece of public art out of boredom is 2018’s least surprising storyline.

In September of 2017, the Meatballers facebook page posted a complaint about the Wellington Night Markets. Their complaint centred around the fact that Meatballers “have spent 5 months chasing the organiser through court for damage caused in April when two of their staff members hanging the overhead lanterns dropped them on our car.” Chasing up reparations for (accidental) property damage. The irony is not subtle here. In fact, it hits you over the head, much like a $300,000 metal sculpture.

Macdonald was injured in his pursuit of… not being bored? He required staples in multiple cuts on his head and legs. Some people have called for sympathy for his injuries. To that I say…

I remember the last time I was genuinely bored.

It was 2012. I was waiting on K’ Road for a friend. I ended up waiting for three hours. My phone had died, so had my iPod, I didn’t have a book to read, and I was tired. My brain was providing no thoughts to entertain me, and my people-watching had devolved quite quickly into being very aware that I’d been standing in the same place on K’ Road for several hours and wondering how goddamned awkward I looked.

I was bored out of my mind.

Let me be clear: even in that state, I would not climb anything, let alone a piece of art, in order to cure that boredom. My general lack of athleticism and skill at climbing could contribute to that, as well as my lack of desire to be seen climbing anything.

That was 2012. This is 2018. Frances McDormand is our reigning Best Actress winner once more, for an already forgotten film. These are different times, times in which I cannot understand how an able-minded adult with a near limitless amount of things to do can find himself in a state of boredom.

Here’s a short list of some (largely free!) things you can do to relieve or cure yourself of boredom:

These tips come to you free of charge, should you or anybody around you feel compelled to climb a piece of art in 2018 through nothing but boredom and an ill-advised desire to showboat in front of a bunch of strangers.