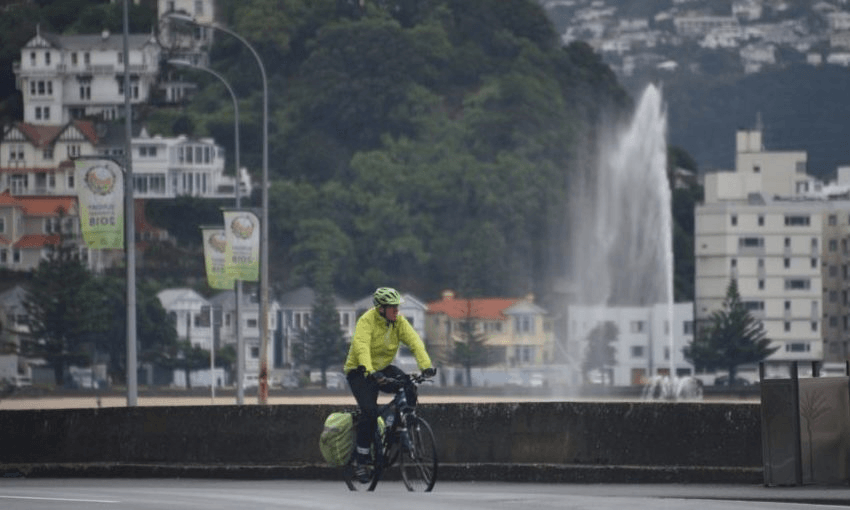 Hell on wheels: the truth about cycling in Wellington

As spring lurches into summer, Wellington wakes up to another day of a crazy-making gusty northerly gale. Or, as we cyclists in the southern suburbs call it, a head wind.

I fasten my helmet tightly and grit my teeth. I’ll take it slowly today because yesterday a car got blown into Evans Bay.

I get to an intersection on my quiet suburban street and prepare to make a left turn. I stick out my hand to indicate my intention to the right-turning driver opposite. As I make my turn, he floors it, tries to cut me off with his double-cab ute and roars “It’s a stop sign! Fuckwit!”

Being called a fuckwit and almost knocked off my bike by an angry man is no way to start my day, so when he stops at the next intersection I cycle up alongside his window and politely make that point.

Which makes him angrier. The wind carries his rage high above Island Bay’s blossoming pohutukawa as he screeches into the flow of traffic.

On any normal day, I am scared and sweary because cycling in Wellington is terrifying and infuriating. The streets are narrow, the hills are steep, the traffic is thick and the drivers are cranky. But the recent near-constant gales are super-sizing both the normal horrors of cycling in the capital and, it seems, the rage of drivers.

I cycle every day except in the rain. Once I risked it and got caught in a downpour on the Brooklyn hilltops. I noticed, as I drifted along the footpath on The Terrace towards work, that I was attracting sympathetic smiles from pedestrians. That’s kind, I thought, and surprising, as I’m usually greeted with resentful glares. A visit to the bathroom mirror at work and there it was – mascara all down one side of my face. The side pummelled by freezing wind and stinging rain in Brooklyn. So now I don’t ride in the rain. Someone suggested I don’t wear mascara. Ha.

I cycle every day because my bike gives me freedom from waiting for a bus that might never come. And buses are a horror story: the passenger who uses the trip as an opportunity for a loud and boring phone conversation; the constant sniffer; the man-spreader; the woman with a billion shopping bags.  Every bus trip is an eternity in hell, and I can halve my commute time on my bike.

We know others by their actions and that’s how cyclists know that many motorists hate us.  They hate to give way to us (so they don’t), they hate to make room on the road (ditto). In the course of a week I got an ear-bashing from one driver raving about being slowed down (by 10 seconds? Maybe 20?) while unable to pass a cyclist and another animated rant about how e-bikes go too fast.

The wind doubles down on the drama. It grabs drivers’ doors and flings them open into the path of unwary cyclists. As huge trucks grind their way up Brooklyn Hill on the way to the Southern Landfill, the wind lifts clouds of dust from uncovered loads and chucks it in the cyclist’s sweaty face.

And it pushes some drivers to the edge of the ledge, turning them into wild-eyed maniacs behind the wheel with zero tolerance for anyone in their path because, dammit, it’s windy. All the bloody time.

But we are not giving up or giving in. At the lights, we cluster on the green painted parts of the road which conveniently (for us) puts us in front of the cars. When the lights change, we fan out across the intersection – left, right and straight ahead, pedalling into the gale or buffeted by the wind hitting us side-on.

There is strength and visibility in our numbers and a desperate optimism that even though we may well be a bunch of fuckwits and idiots, later in the day, if our luck holds, the wind will be at our back.