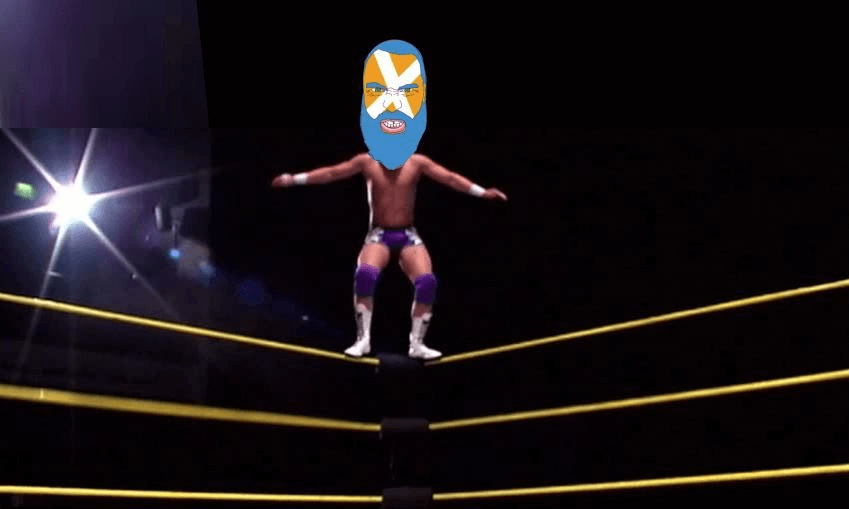 Taking the plunge from the top ropes: will Irn Bruce make the cut?

In the fourth part of his pro-wrestling-for-fitness adventure, Mike Kilpatrick aka Irn Bruce climbs to the top ropes and gives it his best shot

Sometime after midday last Saturday, near the end of the IPW wrestling tryout that has been the main focus of my weight-loss and fitness goals over the last 18 months or so, came a moment that seemed so surreal that if I didn’t have video of it I might not believe it happened.

I’ve day-dreamed plenty about wrestling over the years, envisaged extravagant moves in my head, taken a tag from my struggling partner and even celebrated winning the WWE World Heavyweight Title.

Never once had I thought about standing on the top ropes. Even less likely was jumping off them. OK, jumping might be stretching it, let’s call it falling somewhat elegantly.

Part of that is because I wouldn’t have been able to lift my legs or been mobile enough to get up there until recently. But I also thought I had prepared myself for everything I could face at the tryout. How wrong I was. “The best laid plans…” as a fellow Scot once wrote.

One thing played into my favour – and that was I’d already lost all but a couple of tiny drops of fear, sweated out in the 1.5km run or the multitude or stretching and core exercises and in-ring rolls and back bumps earlier in the session.

As I summoned the last of my strength to clamber up the three ropes, I pondered whether I’d be able to balance once I got there. I also cursed myself for being so eager to get back in the ring, leaving myself the first trainee to face the fall onto the blue mat.

By the time my 44-year-old brain had processed the situation it was already too late. I was standing as tall as I could in the corner and starting to fall. There was a silence – in my own head only I think – and then nothing.

I lived a hundred years in that fraction of a second, the glory of being a wrestler and the sad story of failure mixing with every other possibility. And then my back and shoulders hit the mat and nothing had seemed so natural before in my life.

Exhilaration. Nervousness again. Blood pumping. I had to concentrate to make sure I gave my fellow trainees the respect and encouragement they had given me. Concentrate, Mike. CONCENTRATE. And yet my brain always came back to one of two thoughts:

2) Shit, I bet that hurts when there’s no mat there.

Pleasure and pain mixing together, somehow the sum of the two parts adding up to something more, something I’d become pretty damned accustomed to since I’d first asked my body to give me another shot at getting fit, despite weighing in at 144kgs.

The second trip to the top ropes was even better, more controlled. Enjoyable, even. The high didn’t last.

Just when I thought it was all over, Caleb Just, my trainer who had done so much to get me fit enough to walk through the doors in the first instance, turned full heel – wrestling terminology for ‘bad guy’ – and ordered us back into the ring for more high intensity exercises, just to make sure every last drop of energy had been drained from the perspiring hopefuls.

When he finally called time on the knee raises in the corner I could barely lift an eyebrow never mind another leg.

And then with a few words of wisdom, a shake of hands with all the trainers and trainees, it was over, our future to be decided by an IPW management group chat later in the day. It could have been an anti-climax, it was anything but.

As I struggled to get back into my car – I needed to use my arm to lift my left leg high enough to clear the door frame – I was at peace. I wanted to get in, to continue my journey towards that dream of wrestling a match but if this was it I could be comforted by the fact I’d given my everything. 65kgs, millions of steps, blood, sweat and tears and it was worth it all. And that’s when the emotion hit.

I turned the engine off and had a cry, suddenly overwhelmed by the situation. The only surprise – and a welcome one – was that it hadn’t come earlier in front of everyone else. I recomposed myself, let my partner know that I had indeed survived and I was on my way home and ready for a protein shake and a lie down.

I’m not sure she believed me the first time I said it no longer mattered if I got in or not, but I truly believed it. For the first time I was no longer in control of my destiny, and frankly I was too tired to make any more decisions. Time for someone else to make a call for a change.

I sat in my blissful, uncaring world for a few hours, sharing videos of my exploits with friends and family and enjoying the responses to the top-rope video. And then my watch buzzed, my phone vibrated and I could see it was an e-mail from Conan at IPW.

That was the exact moment I realised I had been lying to myself and my partner for the last few hours. My heart raced and I couldn’t unlock my phone quick enough to read it.

Thank you for attending the tryout this morning…”

The bad news was coming. I could tell. Would I get the standard wrestling fob off “we wish you well for your future endeavours”, or something more personal?

I’m all over the place, my eyes can barely focus.

“We are pleased to say that you have been successful, and would like to invite you to start training with us.”

In those few days since I’ve been on another rollercoaster of emotions. And pain. My body has slowly returned to near normal, aided by another couple of Caleb’s training sessions and ponderous runs.

My brain continues to be my best friend and my worst enemy. It’s asked me whether I still want to be a wrestler any more, whether my body can handle regular, punishing in-ring training and whether I can dedicate myself once more to a new goal.

And it’s allowed me to dream of walking through the curtain as Irn Bruce, my hybrid rock/bagpipe entrance music blaring, to yell at the make-believe crowd and insult the hero already in the ring. And to take the in-ring beating I so richly deserve.

With that as the driving force, how could I possibly say no?

But – and there’s always a but – there’s a very long way to go before I ever step in the ring in front of a crowd. That’s if I ever get there.

You’re coming with me the whole way, though. Think of it like that fall from the top rope – you think you know the destination, but you can’t see where you’re going. You just hope you end up in the right place and without hurting yourself.

Ready? Are you standing tall? Then let’s go…