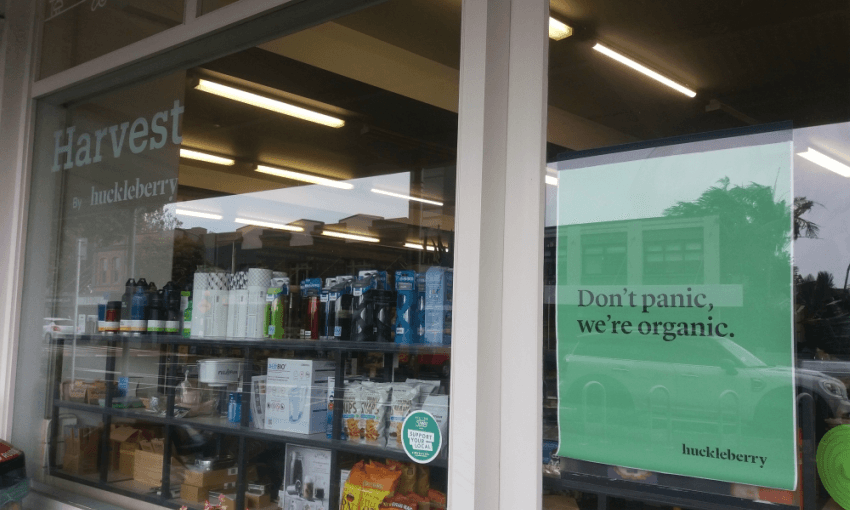 Workers at Harvest by Huckleberry in Grey Lynn are going on strike over low pay, that they say goes against the supermarket’s ethical image. (Picture/ Alex Braae)

Workers at Harvest by Huckleberry in Grey Lynn are going on strike over low pay, that they say goes against the supermarket’s ethical image. (Picture/ Alex Braae)

At a central Auckland organic supermarket, where the shelves are stocked with high end specialty foods, the workers are about to strike over low pay. And they’re not the only supermarket where workers are getting fed up.

Organic. Spray free. Superfood. Gluten free. Ethical. These are some of the words used to sell food at the Harvest by Huckleberry supermarket in the wealthy Auckland suburb of Grey Lynn. But the staff who work there say their wages show the last one – ethical – doesn’t apply.

They’re going on strike for an hour and a half this afternoon, in protest of pay that they say is far lower than they deserve. The average wages at the organic supermarket – which sells products like ten dollar tubes of toothpaste – are lower than those at the Countdown supermarket a few hundred metres down Richmond Road.

A staff member, who spoke on condition of anonymity, said they wanted the strike action to draw attention to the different ways a business can be ethical, or otherwise. They say the starting pay rate is 50 cents above the minimum wage ($16.50) and despite a long process of negotiation, there has never been a better offer than that 50c hourly raise.

“It’s really not ethical at all. We’re selling fair trade products, and there’s a huge disconnect between us as staff and the product we’re selling. We really care about organics and ethics, but we’re not getting what we feel is a fair price.”

They say use of government assistance like the accommodation supplement is widespread, and due to inflation and cost of living increases in Auckland, life is getting more and more difficult. The worker says while annual pay reviews are part of their contracts, they are rarely awarded.

“It just doesn’t really seem to happen. One produce worker has been here for seven years and never got a pay raise,” they said.

“We’re a specialty store. You’re expected to have a lot of knowledge about health food items and different diets. We’re not just a normal supermarket.”

It’s tough to make a living as a retail worker, and supermarkets are no exception. According to Stats NZ, more than 300,000 workers are in retail, trade and accommodation, median weekly earnings for that sector are $630 a week, well below the nationwide median income of $959 a week.

Courtney, a supermarket worker with a different company to Huckleberry, says she lives a life without luxury on her 30 hours a week. She has been trying to get up to 35 hours, and takes extra shifts whenever she can, but is often told there aren’t any extra hours going.

She earns less that $500 a week for her 30 hours, and that is eaten by rent, car repayments and insurance, petrol, and food costs. She says there are other costs, like clothing or doctors visits, and she tries to put $20 a week in savings, but after all that is taken care of, there’s very little left to bank.

“So if I don’t have money I won’t go out with friends, I’ll stay home. I feel like if they go out for dinners or have a party, and I don’t have enough I won’t go and do those things. It puts me behind, they’ll go and do things and I’ll be stuck at home.”

Courtney has been working at the supermarket for ten years, and says there is little prospect of getting anything more than the $17.50 an hour she’s on now.

“It can be quite stressful and sad. Once all my bills are paid, that makes me feel better at the end of it, but there’s nothing happy about it.”

She wants to study so that she can get work in a different industry, but is concerned about the added costs that would come with paying student loans back. Courtney isn’t on any government assistance.

“When you’re living under the living wage (calculated by Living Wage Aotearoa at $20.55 an hour) that $3 can make a big difference. Even up to $19 an hour would make all the difference, but we just have to struggle on and hopefully get there one day. It’s quite sad where you’ve worked so many years, and the minimum wage is just a step behind you.”

She says life would be very different on the living wage, because “money stresses would be gone, and I’d be living more comfortably.”

“I wouldn’t say I’d throw the money away just because you’re getting more, you’d be careful, but you wouldn’t have those stresses about how you’d pay for things.”

FIRST Union, who represent retail workers, are launching a campaign today calling on employers across the sector to pay a living wage to all workers. Secretary for Retail, Finance and Commerce Tali Williams says adequate income allows workers to live a healthy life, particularly when employers are also saying it’s difficult to find workers.

Williams says employers need to recognise that their workers are human, and businesses now have “a unique opportunity to act in a humane way.”

She also warns that workers increasingly won’t settle for being on the minimum wage any more, and customers might decide that they no longer want to support businesses that don’t pay a living wage.