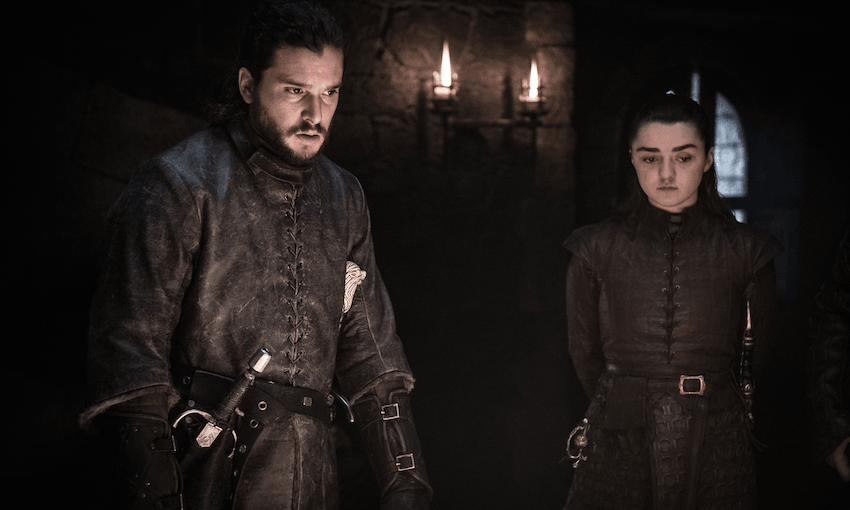 Just because something is sad doesn’t make it great.

Just because something is sad doesn’t make it great.

Sam Brooks swims against the cultural tide in noping out on Game of Thrones.

This story originally ran in Barker’s 1972 magazine. It includes no spoilers for the current season of Game of Thrones, you spoilerphobes.

I stopped watching Game of Thrones around the time a witch who looked like Tori Amos birthed a shadow-beast that killed the gay king. It wasn’t that I didn’t like the show, or didn’t see any value in it – it was just that after two seasons, 20 hours of my life, and myriad onscreen deaths of characters I had at least some modicum of emotional investment in, I was through. This show didn’t make me happy. It certainly didn’t spark even a kindling of joy, to bastardize Marie Kondo.

It just made me miserable.

Nothing that I’ve heard about the show since has made me regret that decision. With your weddings red and your great septs bombings, it seems like a cavalcade of things getting progressively worse and worse for people, where any joy is followed up by a backhanded slap of misery across the face, punishing you for even beginning to think that this show was about that at all. This is the show about rape and dragons, not flowers and sunshine. Go watch The Marvelous Mrs. Maisel for that smiley crap.

At some point, people must stop tuning in for what originally got them hooked onto the show – the acting! The writing! The dragons! – and start tuning in to be punished. They know something bad is going to happen that episode. They know someone they’ve developed a potentially unhealthy emotional connection with is going to end up losing their dick or getting poisoned or meeting their untimely end in a way that is simultaneously karmic and punishing. They know they’re going to end the episode feeling a bit like shit and going “What the fucccck.”

So they come back for that feeling – and that’s where I differ from the Game of Thrones audience, which appears to be every person with access to an internet connection.

I’m a sensitive soul, y’all. I don’t like feeling sad, I don’t like being made to feel bad. It’s why I don’t engage in escape rooms, go camping or watch horror movies. I’m the kind of guy who internalises every meaningless death in a horror film, which is why I’ve never seen a Final Destination film – I want to be able to drive behind a truck without worrying about the entire contents falling out and decapitating me.

If I had kept watching past the immaculate shadow conception in season two, then I’m not sure how I would’ve reacted to The Red Wedding. I don’t know how I would’ve reacted to the mass slaughter of many, many characters who I’d been manipulated into connecting with, to their throats being slashed, to their insides pouring out of their bodies and all for no good reason – as if there could be a reason. It would’ve shaken me, disturbed me, and horrified me, long past when the credits on that episode rolled.

That maybe indicates a problem with me, and my lack of ability to emotionally connect and then disconnect with images on a screen and to disassociate them from my own reality. Maybe that’s a skill that the Game of Thrones audience has – but if the hundreds, thousands, hundreds of thousands of tweets about pretty much any episode of the show are any indication then I don’t think I’m alone here.

So I guess the difference is that I don’t get anything from this experience.

Which brings me to another key part of why I stopped watching Game of Thrones: its complete, utter, church-like seriousness. The idea that this show was not just important, but truly profound. And that is, to use a long-existing word that is now saturated with overuse, problematic.

There’s an idea in our society, and it’s not exactly a modern one, that misery is equal to profundity. It’s the same idea as the myth of the artist suffering – art that is truly great, truly worthy, needs to be shadowed in darkness. The kind of darkness that you need to turn the brightness on your screen up for, Battle of Winterfell style. This is what leads us to think that something like When Harry Met Sally is a silly throwaway film, rather than a cinematic storytelling masterclass, while Full Metal Jacket, because it ‘digs into the horrors of what man is capable of’ is deep, intelligent and complex.

Game of Thrones taps into this same idea – that because it shows a multitude of people suffering, of people experiencing the full extent of darkness of which humanity is capable, it is therefore great. Not that there’s no greatness in Game of Thrones – there is a lushness to the production values and a general high bar of quality amongst the acting and writing that stops it from ever being truly terrible – but its dedication to darkness does not make it great. We all lived through Evanescence doing the same thing, and that wasn’t great either.

The point at which a show, or any form of art really, attains greatness is when it encompasses the full breadth of humanity. You can see it in shows like The Wire, or Enlightened, or even something as supposedly silly as RuPaul’s Drag Race. These shows give you the darkness, the villainy, the pettiness within humans while also showing the lightness, the humour and the love within them. The lightest that Game of Thrones gets is Emilia Clarke’s Christina Aguilera wig.

And honestly, I’ll take The Marvelous Mrs. Maisel and her jokes over that any day.