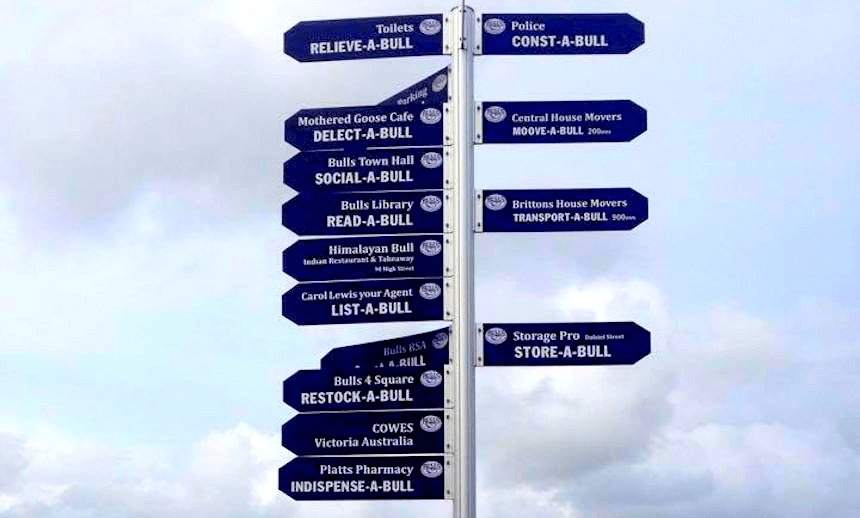 The unauthorised history of Bulls, a town like no udder

Bulls was an unexceptional country town until a chance discovery of a secondhand book of bovine puns changed the course of history. Jess McAllen uncovers the remarka-bull story.

Like many great artists, the person who roused the small town of Bulls to paint the streets with puns will never know how iconic his work was. Richard Ernest Gregory is impossible to track down. Given that he was born on June 1, 1907, he’s probably dead. Or turning 110-years-old in a month.

The England-born author and illustrator who later lived in Australia, published books like Merlin Mandrake’s Magical Mystery Tour and Don’t Swim There: An Infant’s Story of Pollution. Amazon sells his books but never got back to us regarding where the royalties were going. Harper Collins used to publish him via Angus & Robertson Publishers but their files from the time of his writing are “long gone”.

For the above reasons, we can probably assume Richard Gregory doesn’t know that A Lot of Bull, published in 1985, prompted a fire station to be labelled “extinguish-a-bull”, public toilets “reliev-a-bull,” an Anglican church “forgive-a-bull” and so on in a rural town on State Highway One.

It was 1990 and the late Earl Funnell, a modest man of timber mill origins, was spending Friday night in Palmerston North with his wife, Mildred Funnell. They were browsing a second-hand book store, she says, when a moment of ingenuity struck her husband.

“Earl picked up this book and he was reading it right through. He said ‘this is just what I want!’ and purchased it.”

The book was A Lot of Bull  – a collection of drawings of its namesake animal in zany situations with appropriate captions. An earlier book, More Bull, published in the 1970s, has pictures such as: a man up a tree looking at an angry bull with the caption “AVOIDABULL” and a female bull batting her eyelashes at a male bull (“DESIRABULL”).

The Funnell family has a long history in Bulls. Earl’s relatives came to the town in 1937 to set up a timber mill for the Ohakea air-dome hangars. It was sold around 1973.

Mildred still holds on to every article clipping about the puns and even has minutes of the council meeting where Earl first presented the kids book and suggested Bulls use it as a marketing model. Puns for each shop had to be registered at the information centre to ensure there were no double-ups.

“A new shop would come into Bulls and we would go and visit them and ask if they would like a Bulls sign and they all said yes. It had to be put on timber, it had to be painted, and everyone had to have the same picture of their bull.”

It’s hard to pin a Bulls person down to an interview. Graeme Platt – who helped form the Bulls Enterprise Committee in 1989 after the town council amalgamated into Rangitikei County – agrees. He warns that there is a prospective sheep buyer in town who may interrupt.

It’s crucial that people have a pit stop at Bulls when travelling on State Highway One, he says. Around 13,000 vehicles pass through the town a day and if everyone could stop, take some photos of puns and buy a kebab from Jabies Doner that would really help the economy.

“So Earl brought this book along to a meeting one day,” he says, “just a general book about all these silly bulls and he said ‘hey, we’re Bulls, can we do anything with this?’ and we thought it was a great idea.”

A competition was arranged for the townsfolk to design a logo. A man called Doug Bettridge had the winning design and a graphic artist in Palmerston North refined the idea into the logo used today.

No one thought the idea was weird. Back then the town had “nearly 100 per cent” commitment to the team, says Platt, “you didn’t want to be the odd one out”. But in recent years the enterprise committee has ceased to exist. The puns aren’t promoted as much. It’s a real shame, he says. Earl and the committee aren’t even on the town’s Wikipedia page, let alone the book that kick-started the town’s claim to fame.

“Shops come and set up and they don’t know the history. Often nobody knocks on their door and says ‘hey, this is what we do here and you must do it’, so we’ve got a whole lot of businesses in town that don’t use the theme.”

Which invites the question: who are these heartless grinches living in pun-central that can’t stand puns? Even capitalist behemoths like McDonalds (value-a-bull) and Subway (sub-merge-a-bull – okay, points for trying on that one) managed to get into the spirit. Why can’t locals?

“There’s quite a few that haven’t bought into it and that’s the problem. In a small town you need everyone buying into it.”

A place that stood out to me on a recent visit to Bulls was local pub The Rat Hole. The town isn’t called Rats, what was going on with this flagrant lack of respect? However, further inquiry revealed there is a small plaque outside the pub. “We’re remarkable”, someone on the pub’s Facebook told me via a pointedly unpunny message. How it related to a pub – what about drink-a-bull, perhaps regret-a-bull? – remained a mystery until a local revealed the owner’s name: Mark.

Jodi, who runs the Intrigue gift shop in Bulls, never got around to thinking of a pun. If any Spinoff readers have an idea she says she would be open to using it (although she’s sceptical as her shop targets people over the age of 30 and such people are apparently unlikely to read a website).

“Those that have puns have been around a long time,” she says. There are “heaps” of shops that don’t have puns but she “can’t speak to why that would be”.

Mildred wants the new generation of Bulls to understand and honour their wordplay past. The idea has toured the world as an example of good marketing, she says.

“People die and then they’re gone and new people come along and they haven’t any idea of what has gone on or how different things have evolved, have they? It’s all history really, isn’t it?”