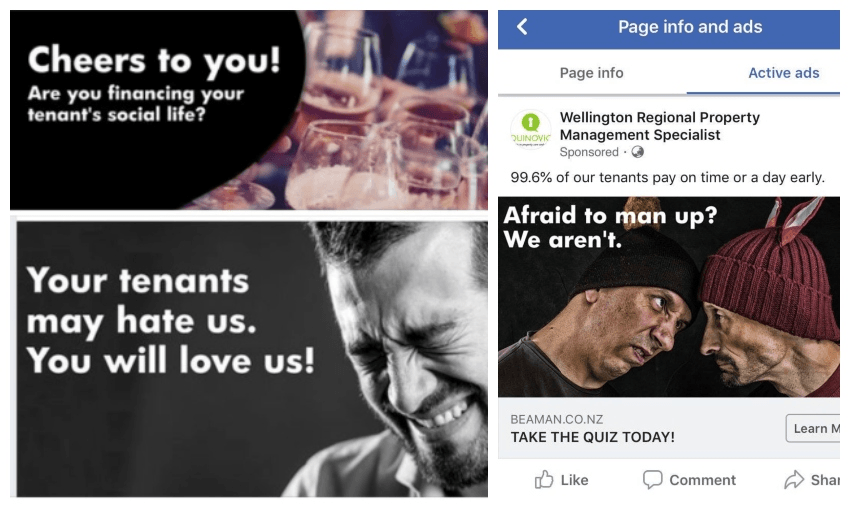 A frightening journey through Quinovic’s history of terrible memes

Quinovic property management have embraced their stereotype of crusty rich people by sharing terrible memes as ads. Madeleine Chapman discovers they’ve been doing it for years.

Mark Richardson explained memes to the eight contestants on The Block NZ last night. “The meme has become very on-trend in the world of social media,” he said, before presenting a challenge whereby the four teams had to make a meme about the show. “Knock up a frame. Take a photo of your team within that frame. Then add some text to give it some context. And what that is, is a…meme.”

I had never heard it described so simply. An image with some text. How hard could it be? Judging by the varying stages of grief I experienced in the next ten minutes, incredibly hard. All their memes were bad.

I had planned to write about memes on TV and why they’re the worst, but then I remembered the National Party’s memes from earlier this year. Political party memes vs reality TV memes: who would wear the crown of Worst Memes? Turns out, neither. Mere hours ago, Renters United, a community group on Facebook working to “make renting better for everyone” in New Zealand, drew attention to the most atrocious memes I have seen in my short life.

To be fair, these are ads by Quinovic Property Management. It’s a sponsored post on Facebook designed to be read as an ad, like a billboard. But it’s also exclusively on social media where memes are “very on trend” and is clearly aiming to be viewed as a meme of sorts. Large corporations are notoriously terrible when it comes to memes because they’re almost always punching down. And punching down is about as far from a meme’s purpose as you can get. So a property management behemoth attempting memes about renters is a tight Venn diagram of shit, shite, and shart.

Quinovic head office have since insisted this is not a Quinovic issue, rather a Quinovic Lambton Quay issue. “This is a campaign that has been run by one of our franchisees, not something that has been run by ‘group office’,” said Quinovic chief operating officer Paul Chapman, speaking to Stuff earlier today. Too bad for Chapman, it would appear that all Quinovic franchisees are sprinting to the bottom of the meme world. Here are just a few meme samples you can taste from a number of Quinovic franchise Facebook pages.

The Lambton Quay office proves to be the biggest lover of memes. For two months at the end of last year, they ran a meme campaign of sorts, apparently belittling historical achievements. It was strange and sad. But what is saddest of all is that these appear to be completely original. Which means the multiple fonts, the random colours, the odd graphics were all put together from scratch. Such a huge time investment for such non-existent engagement.

There’s an ickiness to reading people’s mocking complaints about others inherently worse off than they are. Once again, I come back to the necessity of ‘punching up’ when making memes. I make a lot of memes mocking my bosses at work that everyone in the office enjoys, but I’m allowed to because at the end of the day they go home to a property they own and I go home to a property owned by Laila Harré (true fact).

My educated guess is that this is referring to Daylight Savings. My educated opinion is that if you can’t correctly upload a photo to Facebook in this dreaded year 2018, you shouldn’t be allowed online. With each image I saw on every Quinovic franchise page, I imagined what the person who uploaded it looked like. And with every franchise page, I found a staff photo and was proven correct every single time.

Again, joking about things that cause very real stress and harm to others is the opposite of what memes are for these days. I know some people who would find this one funny because of its darkness, but darkness that can easily be traced to real life troubles is a lot less funny. The lone comment is much funnier.

Quinovic Viaduct weirdly posted one very funny meme. It wasn’t about tenants being the worst, or landlords being gods. It definitely wasn’t made by anyone in the real estate industry. It’s just a random good meme that was probably uploaded by accident and without context. It’s a reminder of the joy memes are supposed to bring, and how that joy has been tainted by the likes of Quinovic and their liquid fart attempts at meme humour.