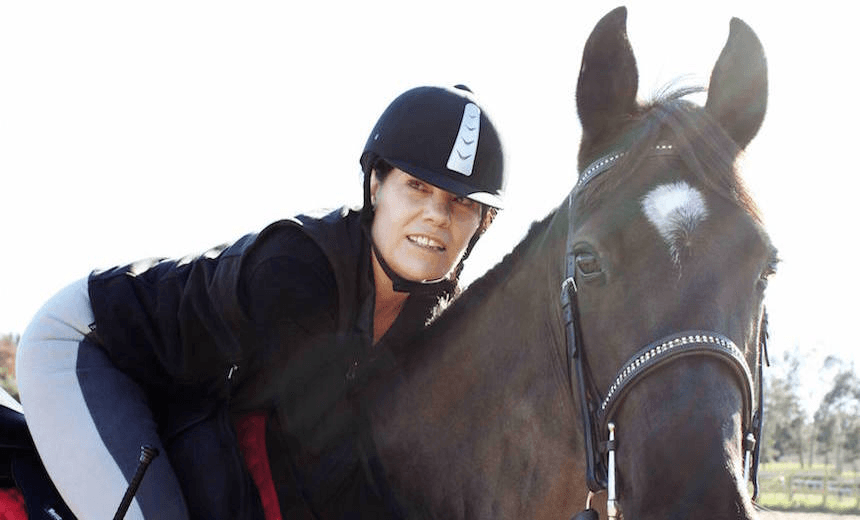 My mum drank warm KGBs, she bullied Jamie Oliver, and then she died

Happy Mother’s Day! Today Sam Brooks remembers his crazy/beautiful mother, and the life lessons she left him with.

she broke three ab circle pros and made the manufacturers replace them free of charge each time. she never admitted they didn't work.

It was my mother’s birthday a few weeks ago. She would’ve been 57, which now seems both hilarious and bizarre because I literally have no image or concept of what my mother would be like as a 57 year old because she died before she got to that age.

This is not so much funny as it is dark. It is this sense of humour that my mother passed onto me.

To recognise her birthday, I did a few things. One, I got an alcohol brunch with my friend and soul-sister Jean. Two, I went to Smith and Caugheys and judged everything and everybody there. Three, I got champagne and went to see Anne Hathaway kaiju movie Colossal. Four, I went home and had Samgria with my best friend.

Samgria is a cocktail whose recipe I am delighted to share with Spinoff readers. It is one part red wine (ideally Spanish red wine, for authenticity), one part Just Juice (Tropical, Zero Sugar), one part Sprite Zero (the Zero is v crucial here, the Sprite is for fizz, not for taste) and one part vodka or gin. Drink at your own peril. Friends groan whenever I announce I am making it.

the film she saw more than any other film was salma hayek-matthew perry vehicle fools rush in.

The fifth, and most important, thing is that I decided to do a series of tweets about weird and fun facts about my mother. My mother was a strange woman, as the tweets embedded in this article will testify. I actually don’t think she’s any more or less strange than any other mother. She just had the misfortune of raising a son with a terrifyingly good memory and the ability to frame her qualities in ways that make people laugh. (My tweets about her are peppered throughout this post, and you can read the whole thread here.)

My mother let me watch Absolutely Fabulous from the age of four. I even owned the scripts and would read along with them.

My mother named our cat Rehab, after the Amy Winehouse song. I’ve never looked crazier than when yelling ‘Rehab!’ into the dark.

My mother made Jamie Oliver (the Naked Chef) give him her drumstick (do you remember when Jamie Oliver was in a band?)

My mother’s drink of choice was a warm KGB mixed with off-brand lemonade.

And around the time my mother died she was on enough painkillers to kill a horse, and she was up and about the day before she died.

My mum died of cancer! I got a phonecall in August of 2014 – I remember this because I was due to open a play then, and I remember most things through that lens – letting me know that my mum had cancer. She’d fallen off a horse earlier in the year and been receiving treatment for that, but there was cancer brewing all along. In the space of about a week, her prognosis went from having one-to-two years left to having a few months left to have about eight weeks left.

My mother made the pretty incredible and enviable choice to die at home. It’s a rare luxury to die on your own terms, even terms as compromised as ‘got cancer pretty early in life’. Once she was diagnosed she never saw the inside of a hospital; she instead chose to hold court at home in Onewhero, a good hour and a half from Auckland’s CBD. (She would insist it only took 45 minutes. This was, and remains, an outright lie.)

In the weeks leading up to my mother’s death, she became quite worried about me being alone and not having anybody to take care of me. This is a pretty fair worry. At the time, my mother and I were basically our own unit, aside from my very amazing stepfather and my grandmother (who would die about six months later, because my life is nothing if not dramaturgically identical to a season of Grey’s Anatomy).

Now, in my non-Spinoff-life, I’m a playwright. And a fairly successful one! I also can’t drive. In my mother’s last weeks, I would arrange readings of plays I’d written at my mum’s house. I would emotionally blackmail my most famous friends into coming out and doing readings. This fulfilled two aims: One, my mother would be aware of my work as a playwright, and also as a good playwright, and two, my mother would know that I had all these friends who were willing to travel out to the middle of nowhere and do these readings for her.

On weekends I did this, but during the week, when it was less easy to wrangle friends and she had less energy to deal with it, I would watch Brokenwood Mysteries, New Zealand’s current employer of lots of actors, with her. Every now and then, I would point out an actor on the screen and go, “Hey, I’m friends with that person.” This was both a beautiful way to name drop and a technique to calm her a bit. Not only did I have friends, but I had famous friends who would take care of me when she was gone.

So when Nic Sampson (hi, Nic, going to namedrop you here) from the TV came out to her house to read one of my plays for her, it was a big deal. Not only is there a person who is willing to do this for her son, there’s a person from the TV who wants to do it. Important people are caring for her son, so her son will be fine.

At the very least, she knew I had the capacity to bully people into doing things for me, so therefore she knew that I would be fine, as most bullies and emotional blackmailers tend to be.

Mother’s Day has become an odd thing for me. As someone who buys flowers for people fairly often and always forgets to turn off the newsletters tickbox, it’s when I get a lot of emails reminding me to buy flowers for my mother. Also as someone who is very good at buying gifts, and has a best friend with two mothers, it’s something that I find myself engaging with more than is probably required for someone who doesn’t have a mother anymore.

during my first play, her phone went off.

her ringtone? sex on fire by kings of leon

I am very much aware of Mother’s Day as less a time for memory and emotion and more as an opportunity for specific industries to make a killing (florists, winemakers, the people who made Hilary Swank vehicle PS I Love You).

I don’t really need that reminder anymore. Not because I don’t have a mother now, but because there’s not a day when I don’t remember my mother or think about what she would think about one thing or another. It becomes more present because of the absence; I don’t need Mother’s Day because every day has become No-Longer-Having-a-Mother-Day and therefore every day is also Mother’s Day.

Around this time last year I ran into one of my close friends while she was very drunk. She’d only met my mother a few times, but she said that every time I smiled she saw my mother in me. I buy this! My mother and I both have very large teeth and smile with our entire faces, because that’s what shared genetics will do. But it was one of those moments where I was like, “Oh, of course I’m my mother’s son.”

My mother was the woman who drank warm KGBs mixed with lemonade and bullied Jamie Oliver into giving him her drumstick. I’m the dude who drinks Samgria, which is possibly legally poison, and bullies Nic Sampson into reading plays. More importantly, I’m the dude who chooses to remember my mother by doing all these things and doing them without shame.

I’m my mother’s son, and I couldn’t be prouder.