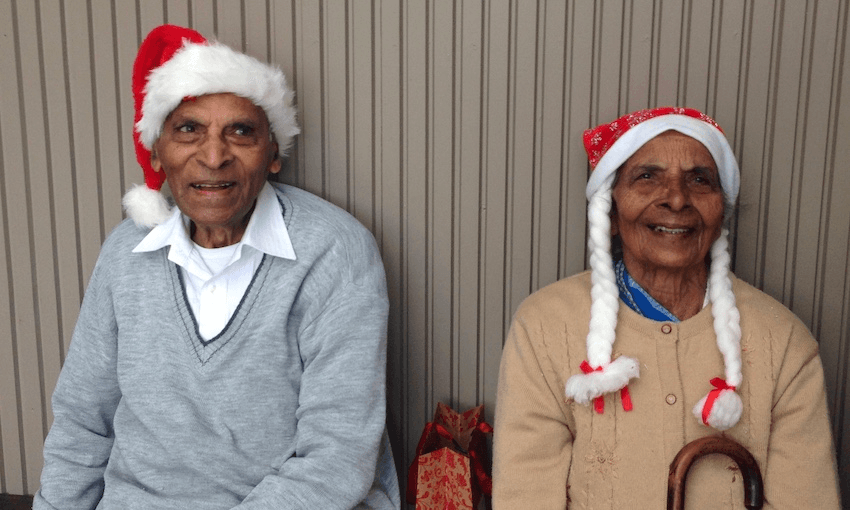 The secret to living to 103

Unless we look closely sometimes we forget the important role our closest guides have on our lives. On his grandmother’s 103rd birthday, Arun Jeram takes a moment to examine his grandparents’ legacy.

When most people discover I have a granddad who is 103 and a grandmother who is also 103, and they are both alive and well, the reaction is usually something like, “That’s extraordinary.” Which is then quickly followed up by the question, “What’s the secret?”

Much to their disappointment, there isn’t one. There’s no elixir, no special exercise, and no magic superfood.

I know this because I was fortunate enough to be raised by them. My grandparents, parents, sister and I all lived in the same house when I was young. Mai and Bapa as I call them (grandmother and grandfather), were effectively my second set of parents.

Last week was Mai’s birthday and she wanted fish and chips for dinner. Which is exactly what she wanted for her 102nd birthday, and her 101st birthday, and pretty much every other birthday before that. This meal has become somewhat of an annual tradition. A few of the family go around, we eat, and we hang out. I know turning 103 is a noteworthy occasion, but for me, Mai’s achievement didn’t feel out of the ordinary.

As with any close family member, they become part of the home and everything extraordinary about them is overlooked. They eat the same home cooked food, at the same time, with the same medium-sized portions. Mai regularly watches Coronation Street and never drinks alcohol, while Bapa regularly gambles at the TAB and smoked when it was still cool. But if I scratch the surface, I am aware that the close contact I have had with my two centenarians has also shaped how I see life.

Love is essential, being in love is not. Growing up, I never heard Mai and Bapa say “I love you”. I never saw them kiss, and the only time I saw them hold hands was when a photographer made them do it for a family photo. Maybe this is because when they were young there were no Hugh Grant movies to show them how to fall in love. Like many young Indians at the time, they had an arranged marriage. (An arranged marriage is basically real life Married at First Sight but the experts are your parents and you actually commit to staying together.)

However, the lack of affection doesn’t mean my grandparents’ relationship was devoid of love. They just had a different kind of love. For them, it’s more of a great companionship than a Notting Hill romance.

Obviously, it’s no longer the 1900s and while it would be nice to be in a bookshop and stand in front of a boy or girl, asking them to love you, if there’s something to be learnt from Mai and Bapa about relationship longevity, it’s that being in love isn’t essential. At the very least, if you do get married, hopefully, it’s to someone who can be your best friend.

Everything fades. Looks fade, curtains fade, and observing Mai and Bapa, it’s occurred to me that even our accomplishments fade.

My grandparents experienced a lot. When my grandfather moved to New Zealand as a young boy he was among the first Indian migrants to make a life here. As a young man, he returned to India and was a freedom fighter with Gandhi. For months Bapa lived on the run, blowing up British property and displaying acts of civil disobedience so his country could regain independence. He was caught and put in a colonial prison.

Meanwhile, Mai looked after their children, fed the buffaloes, worked the fields and did everything else needed to keep the household running. When the Indian police came searching for my granddad, they beat her with a cane when she wouldn’t tell them where he was hiding (she didn’t actually know because my granddad didn’t tell her).

After independence, they chose to settle in New Zealand and got on with raising six kids. They would’ve seen and heard and survived a lot. And yet, although their achievements are remarkable, and no one has forgotten what they’ve done, no one really remembers either. Governments change, new stories take importance, and people move on with their lives. But the people that matter stick around for everyday life.

People like my mother who helps prepare their meals, or my dad (their son) who invited them to live with him, or my sister who regularly does their shopping and cuts their toenails. This is what maintains a person’s dignity. Because in the end, what you’ve done in your life doesn’t look after you, your people do.

When I was born, Mai was in her late seventies, so by the time I was a thinking child, she had celebrated her eightieth birthday. At this point, she decided she’d done enough living. She’d raised six children, 15 grandchildren, 25 great-grandchildren, and in her mind, there was nothing left to do. She told everyone she wanted to die.

Of course, everyone tried to convince her otherwise, but she persisted. Every time someone visited, she told them how much she wanted to pass on, and there wasn’t anyone older or wiser who could tell her she was wrong. She wasn’t sick, she wasn’t in pain, she was just tired.

As a 33 year old, I fantasise about the energy I had in my 20s. I could work all week, party at night and wake up feeling fresh on Saturday. Now a successful weekend is determined by whether or not I have a good night’s sleep. If that’s the difference after 10 years of being an adult, I can only imagine how big that gulf might be in another 70.

Hearing my grandmother ask God on a daily basis to “Hurry up and take her away” has made me really appreciate the life I have left to live. I know as I get older I will get tired. And so I probably shouldn’t put off anything to tomorrow, because tomorrow I might not have the energy to pursue my dreams.

Perhaps the most satisfying thing I have learnt is that the Queen does indeed send you a letter when you turn 100. But like love in a Hugh Grant movie, the myth is more romantic than the reality. Sadly, Her Majesty doesn’t have a great big Rolodex in her room to keep track of everyone’s birth dates. One of your family members has to inform the Department of Internal Affairs there’s a hundredth birthday coming up and then they’ll give Elizabeth a gentle reminder to send a card. Just don’t expect it to be handwritten or signed. This is the 2000s. That’s what the palace printers are for.

I know that Mai and Bapa’s time here is limited. When my centenarians do eventually leave us, I suspect I won’t really dwell on how old they lived to be or what they achieved. Instead I’ll remember moments like Bapa bowling me out in hallway cricket when I was a kid, even though he was over 80 years old. Or how every time Mai and I sit together, we don’t even have to speak yet we still manage to laugh at everything and each other. But mainly I’ll just remember how they were always there. How their presence in my life helped make me who I am. And I’ll be reminded that no matter how old I get, the only thing that is truly important is the good people around me.