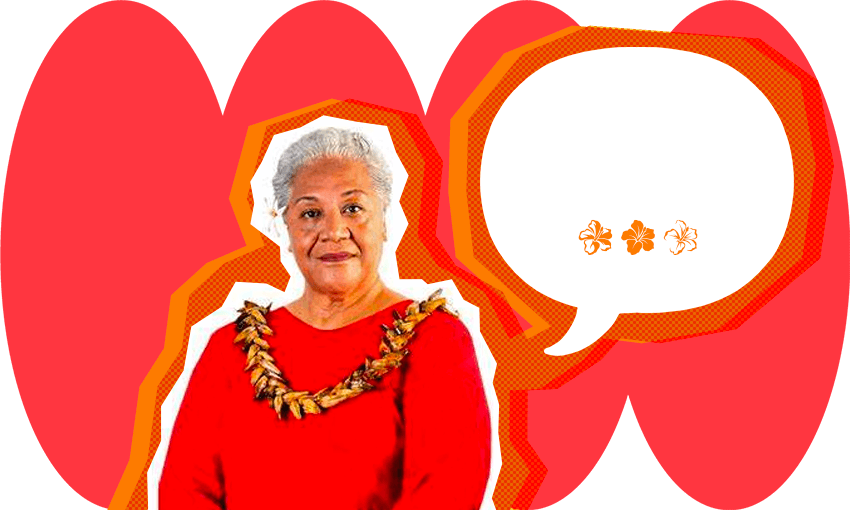 New Sāmoan prime minister Afioga Fiamē Naomi Mata’afa is in New Zealand on her first bilateral trip. Sela Jane Hopgood spoke to some of the students who got the opportunity to meet the inspirational leader in Tāmaki Makaurau yesterday.

AUT student Manaui Ash-Faulalo was preparing for a fundraiser event last Friday when her phone rang. It was someone from the university, asking if she would like to be one of five guests to ask Sāmoa’s first female prime minister, Afioga Fiamē Naomi Mata’afa, a question after her Q&A at the city campus, where she was to speak about leadership, Sāmoa and the political situation in the Pacific region.

“I couldn’t believe it and immediately I was scared because I’m the type of person that doesn’t want to screw things up, especially if it’s for someone as prestigious as Fiamē,” Ash-Faulalo says. She wanted to make her parents proud, so she prepared a short speech that led to a question about how to have the confidence to use one’s voice in different spaces.

Fiamē was listed among the BBC’s 100 most inspiring and influential women from around the world in 2021, so who wouldn’t feel this way as a young Sāmoan woman? As Fiamē walked into the room just after 9am on Monday morning, she was greeted with a standing ovation. Her presence evoked a sense of pride for Sāmoans, for Pacific people, for women.

“My parents were watching me online, so there was that pressure to ace my spiel,” Ash-Faulalo says. “But when Fiamē began to answer, I felt relieved and there was a sense of connection with the Honourable as she looked me in the eye and told us a story through her answer, her lived experience as a female leader in the political arena.” Ash-Faulalo notes how witty yet respectful Fiamē was as she spoke to around 100 attendants at the Te Iringa Wave Room – many dressed in their best puletasi outfits and red ula fala necklaces.

Siotara Neria-Stowers, a year 13 prefect from McAuley High School, sat in admiration of Fiamē as she spoke about her father, the late Fiamē Mata’afa Faumuina Mulinu’u II, who served as Sāmoa’s first prime minister. There was a connection: Neria-Stowers’s family hails from Lotofaga, the village Fiamē is from.

“She is such a huge inspiration and role model for young Sāmoans like myself. [She shows us] that we too are capable and valuable to be leaders in society and I hope to carry those same leadership qualities wherever I go in life,” Neria-Stowers says. She felt extremely nervous after being selected as one of the guests to ask Fiamē a question at the event: “My heart was just beating out of my uniform, she is so amazing.”

Neria-Stowers asked Fiamē how she felt when the FAST (Fa’atuatua i le Atua Sāmoa ua Tasi – “Sāmoa united in faith”) party was locked out of the parliament building by the previous government on the morning she was to be sworn in as prime minister. Fiamē earned widespread respect for her calm handling of Samoa’s prolonged election crisis in 2021.

“Disappointed, but not surprised,” was Fiamē’s answer. “One of the main points by Fiamē from this event that I took away was to be patient,” says Neria-Stowers. “Fiamē used the Sāmoan word onosa’i, which I will apply more to my everyday life as I plan to go to the University of Auckland to study health science and nursing,” she said.

Fiamē shared how she knew she wanted to go into politics from a young age: “I just didn’t expect it to happen so fast,” she told the crowd. She became the first woman to serve as a member of parliament at the age of 27.

Gardenia Lemoa, a year 13 student from Māngere College, felt butterflies in her stomach when she was asked to accompany her deputy principal Melegalenuu Ah Sam to the talanoa. “I was really excited to attend as if I was going to interview her,” she laughs. Lemoa sat in the crowd, directly opposite Fiamē, as the prime minister spoke about becoming a matai chief as a 20-year-old and how she had to leave her studies at Victoria University of Wellington to defend her title against relatives in Sāmoa who claimed she was an “absentee matai”.

Lemoa says she loved how passionately Fiamē spoke about education, which has given her the drive to finish her final year of high school as strongly as possible. “I want to do midwifery in the future and do my best in the field, so hearing Fiamē’s journey from being a student in New Zealand to getting into politics at a young age, and her learnings from those monumental parts of her life, was the motivation I needed to get through 2022.”

Fiamē is highly respectd across the Pacific region for her work in education and gender equality. “I’m so proud to be able to witness Sāmoa have a female leader who I now look up to,” Lemoa says. “It will definitely be one of my highlights of my schooling years.”