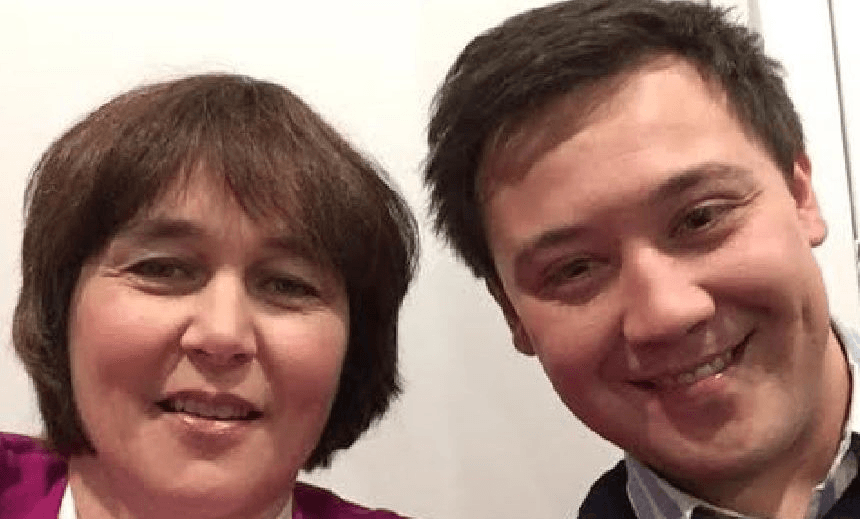 He Aituā, Helen Kelly: a force of nature, a national treasure, my comrade and my hero

Helen Kelly, the mighty trade union leader, the irrepressible campaigner, the bane of dodgy bosses everywhere, was my comrade and hero.

For any other person this might feel over the top. In an obituary lavish tributes are customary, but even the highest praise feels too small for Helen Kelly. In the Council of Trade Unions board room, on the top floor of Education House in central Wellington, the walls are lined with portraits of old white blokes looking over the skyline union members built.

That’s until you reach Helen Kelly’s portrait, the first woman to lead New Zealand’s trade union movement. Back in the day her father, Pat Kelly, a Liverpudlian and “ten pound pom” who went on to become the president of the Wellington Trades Council, would go around telling his comrades “she’s neat, eh?” after Helen was elected general secretary of the Tertiary Education Union.

I guess you could say trade unionism was in the blood, it was part of her whakapapa. “Our home was union central,” Helen told the Wellingtonian in 2010. Yet things might have gone the other way. Helen’s mother, Cath Eichelbaum, a Communist Party member who worked in the old Department of Māori Affairs, was part of the Chapman legal family, famous for producing two Supreme Court justices. Cath’s cousin, Thomas Eichelbaum, went on to become the country’s Chief Justice.

Helen herself trained as a lawyer, not that the establishment was ever for her. The Kelly family home in Mount Victoria was like a halfway house for visiting intellectuals, South African radicals, and kids who just needed a place stay. “Mum would wake us signing ‘wake up darlings from your slumbers,'” after Helen and her brother Max had given up their bedroom for one of the family’s visitors.

It was an early lesson in service and sacrifice. This is the astonishing thing about Helen: she was never self-centred, even going as far as talking about her health like a sympathetic observer might. “I’m lethargic, but the doctors are pleased with where I am,” she told me last year on a TV set, “well, all things considered.” Are you in pain? “Yeah, but the dak helps.”

Perhaps the first reaction to a cancer diagnosis is to turn inwards. Yet Helen saw a campaigning moment, using an appearance on TV3 to admit she was taking marijuana for pain relief and challenging politicians to improve access to medicinal marijuana. Granted, the law remains the same, but it felt like we crossed a threshold: if you’re suffering from cancer and taking marijuana to help cope, you don’t have to feel ashamed.

This isn’t to say Helen “won” every issue. She couldn’t, after a spirited campaign, stop Peter Jackson, Warner Bros and the National Government from stripping film workers of their work rights. Conditions were so bad on the set of The Hobbit that some actors were said to be forced to share contact lenses, yet without employment protections the actors – sorry, “contractors” – could do little more than leak to the media.

I suspect this loss changed Helen. It hardened her. And she didn’t lose again. “That woman Helen Kelly,” as one bitter employer put it, went on to save lives in the forestry industry and help transform New Zealand’s health and safety law. When travelling through Tokoroa Helen would stay with the Findlays, a whanau who lost their father Charles in a forestry accident in 2013.

“Unions must become public institutions,” Helen told delegates in 2015 at the last Council of Trade Unions conference she presided over. These were more than mere words. When Helen went to the West Coast to support the Pike River families, she never did so as the president of a private organisation that just happens to represent working people. She did so as the leader of the largest democratic institution in the country, the 360,000-strong Council of Trade Unions.

This is Helen: always there for other people. She was there for the meat workers in 2012, working with iwi leaders to negotiate a new employment agreement at AFFCO-Talleys. The iwi leaders at the table were so taken with Helen they invited her out fishing the next day. I’m told this is the highest compliment possible. She’d make tremendous company out on the boat. Or possibly on a hunting trip.

“Hey mate, Helen here” – she’s calling from a treatment session in Auckland, catching her breath with each word – “can you call me as soon as you get this. I need to talk to you about the local elections.” This voicemail is saved to my phone. It captures something about Helen. Her fighting spirit, her phenomenal energy, but also the thing that’s harder to name. Her mana.

Not mana in the sense of status, but mana in the sense of force. Almost the metaphysical. Where did it come from? Whakapapa, yes, but also her partner Steve and her son Dylan. Helen was herself a “public institution”, almost a fact of national life, but her life and memory belong to Steve and Dylan first. They carry her mana. To them, our thoughts and love go. And to Helen there are only two words: