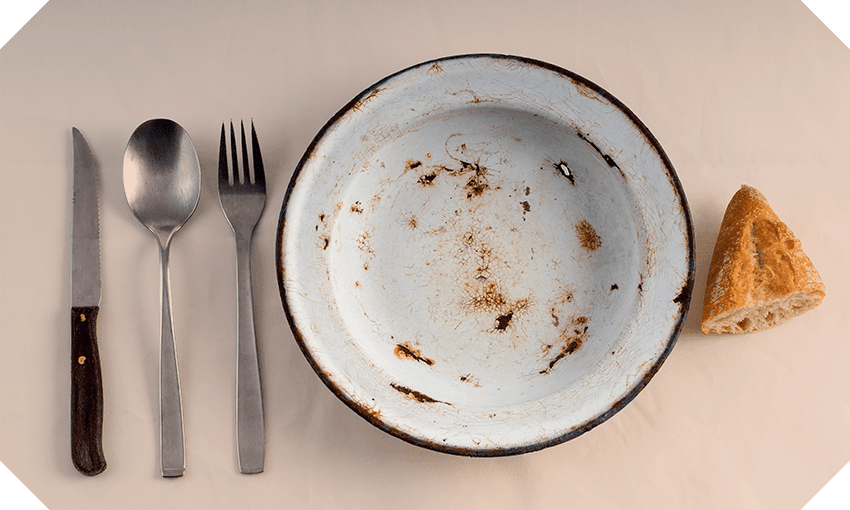 A place at the table

His grandmother raised seven children and she ate in the kitchen. When the table was set she set it for everybody else but her.

This is likely what her mother did and her mother before her. And now her grandson eats in the kitchen. He eats when everyone is already eating. He never starts before anyone else.

I make him a space at the table but he eats in the kitchen.

“We really try to give the kids a balanced main meal. We try to get veggies in our evening meals and we try to have a piece of fruit for them to have every day – even if that means we have to go without.” – Daryl

According to Stats NZ, food prices increased 6.8% in the year ended February 2022, the largest annual increase since 2011.

Mothers stood in kitchens and ate whatever food was left and if there was not any left they did not eat. Mothers did not set a place at the table because they had nothing on their plates. Because they wanted everyone else to eat first. Because they wanted full bellies for their children. For some mothers it was to ensure the head of the house ate first. They showed they were leading the house with their endless sacrifice. I don’t want any mothers to be hungry any more.

When everyone is eating – the dog, the kids, and me – he is happiest. To be able to feed your family is taken for granted by many. We are lucky, we have enough. But every time I see him in the kitchen, watching everyone eating, when I tell him to “come, sit”. I see his mother, his grandmother, his great-grandmother standing where he stands.

I know that’s why he stands.

“If there was only, just say a little bit of meat of something and there was just enough to feed the kids, then I wouldn’t eat, I’d go without eating. Just because I’d rather them be fed.” – Julye

The space he holds isn’t one of necessity any more; we are so lucky that right now there isn’t the scarcity of the past.

But by holding this space he stands with all of the women of his past who have not had what we have now. He sees them and says: “I know you tried and look at what you made. You provide again and again through generations.”

“I just go without and make sure that my son has got what he needs for his school lunches, breakfast, dinner. And if there’s not enough then I will skip a meal.” – Sheryl

He prides himself on finding the cheapest cuts. Another passed-down lesson. There is pride in providing, he has seen this, been taught this by the woman and the aunties who raised him.

But you must drive further, go to each supermarket for the specials. And the price of petrol? Well…

Still, we are lucky. We have enough.

I stand behind him in the kitchen and rest my head against his back. I stand behind, and with, all the women who have gone to bed unfed so their babies could eat.

He stands in the space, and as a whānau we try to make a place for others at our table, at their tables.

Mutual aid is in his blood.

He makes up parcels of food because he found these, five for $5. He shows our boys how providing isn’t just for your whānau, it’s for your community. We each give what we have. All we have is each other..

Before the pandemic, approximately 14% of Aotearoa was “food insecure”. Then, they needed immediate assistance.

How many less places do we have at the table now?

And on the news they argue about whether to call it a cost of living crisis. The ones who made it so will call it so until they sit in power. And then they will call it by another name.

Petrol prices will continue to rise.

Property managers who have always eaten first will say it’s time to increase the rent. Again.

Others will talk about “easing the pressure”. Fiddling with a noose that tightens around the necks of those who just want just enough.

Those who have enough will embrace tax cuts for a little bit more than enough. Cuts on cuts.

And mothers will stand in kitchens.

What if they had a place at the table?

What would they say?

And would it be heard?