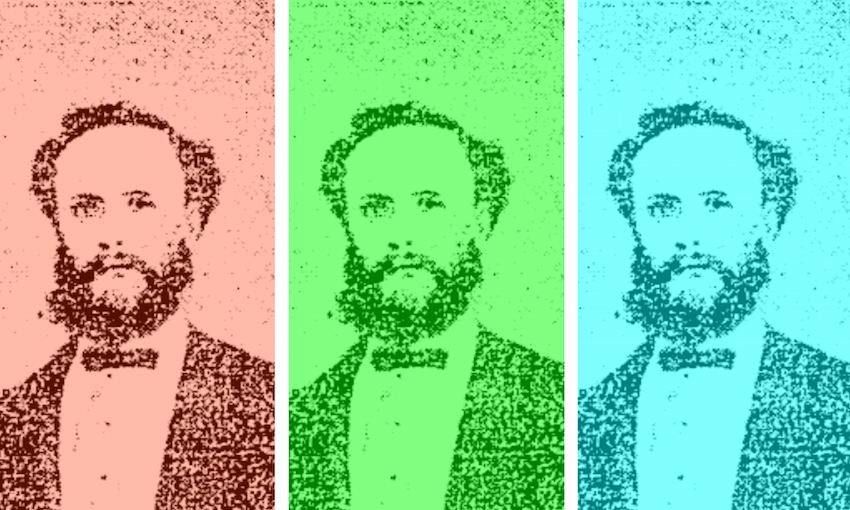 We are a clan vowing vengeance: The arsonist who terrorised 1870s Auckland

Cyrus Haley burned down several of the most famous buildings in 19th century Auckland and tried to kill the family of a prominent businessman. To this day we still don’t know why.

January 27th, 1872. Auckland’s chief of police, Inspector Broham, is hot on the trail of a fugitive who’d been terrorising the city.

Over the previous year, this mysterious figure had burned down five major buildings and sent threatening letters to newspapers. He claimed to be the leader of a group that had vowed to “destroy £100,000 worth of property and to take 5 of the lives of the most obnoxious persons.”

Things got even more serious on January 22nd, 1872. The mystery man fired eight shots into the home of New Zealand’s most prominent businessman, Thomas Russell (who featured in a previous Black Sheep episode).

But then the criminal slipped up. Returning to Russell’s home a few days after the shooting, he set two haystacks on fire. The police were quickly alerted and Inspector Broham spotted a man trying to leave the scene.

“In the pursuit Mr. Broham had to leap a massive stone wall, cross through an orchard, and again over an hawthorn fence, following up the chase over some very rough ground, across ditches, and through thick scrub. The man was still considerably ahead, as he also proved a swift runner: yet the pace of Mr. Broham told at last, and every minute the distance between the two lessened.”

Finally, the shadowy figure realised there was no escaping Inspector Broham who the Herald described as “remarkably swift of foot”.

The man turned on Inspector Broham, raised a gun, and pointed it directly at the police chief.

“But before he can fire he trips and falls,” says historian Mark Derby. “[Inspector Broham] subdues the man… and by the moonlight he recognises him.”

To everyone’s shock the man who’d been terrorising the city was a well known figure in Auckland’s commercial scene – an investor and engineer called Cyrus Haley.

Cyrus Haley was 28 when he arrived in New Zealand in 1870 with his wife Emily and their two children.

The couple came from relatively wealthy backgrounds and were determined to rise in Auckland’s elite social circles. At first, they tried to make a splash in the art scene.

Emily Haley was a professional singer under the stage name of “Madame Halle” and Cyrus helped organise a concert at the Auckland Music Hall to show off her talents. Anticipation was high, with glowing previews like this one in the Auckland Star:

“Judging from the programme and the character of the performers, we anticipate one of the most attractive and successful concerts that can be desired. This is the first of a series of concerts to be given by Madame Halle, and if her performances warrant such critiques as have accompanied her performances elsewhere, we predict for this lady a brilliant success in Auckland.”

But the day after the concert it’s a different story…

“The concert is a disaster,” says Mark Derby. “It seems as though Mrs Haley had a problem with drink, wasn’t entirely sober and missed her notes.  The audiences were poor and the second concert is cancelled. So their dreams of making a splash on the Auckland cultural scene are dashed.”

This is where the trouble began.

Over the next few weeks a number of major Auckland institutions went up in flames. They included the Music Hall where Emily Haley held her disastrous concert as well as a sailing ship named the “City of Auckland” and the local kerosene store.

The people of Auckland were in an uproar and their fears were only heightened by a threatening letter sent to the Southern Cross newspaper. It gave accurate details of how the fires were started and went on to say this:

“We are a clan vowing vengeance & determined to have by any or some means what we have not been able to get by fair means. … Fortunately for the poor persons who have been gulled out here you all have easily assailable points — wooden houses, & circumstances favoring assassination. 1871 will be a sad year for Auckland”

Despite the offer of a five hundred pound reward, the police had no success in tracing the sender of that letter though there was a lot of speculation that this “clan vowing vengeance” might be anarchist or communist fanatics.

There were two further infernos, one in late 1871 and another at the beginning of 1872. The first was at a restaurant and reading room owned by Cyrus Haley while the second was at the Choral Hall built on the same site as the torched Music Hall.

Right up to this point nobody had any suspicion that Cyrus Haley was responsible for the fires. But he would soon be unmasked.

SHOOTER IN THE NIGHT

Just after midnight on January 22nd, 1872 Emeline Russell, the wife of Thomas Russell, woke to the sound of footsteps on her verandah. The New Zealand Herald described what followed:

“Mrs Russell, hearing the footsteps, at once called out to her son, a lad sleeping in the next room, that there was some person about. The son got out of his bed, and then went to the window. The windows of the house are glass, opening onto the verandah in the French style. He drew aside the curtain, and put his face close to the glass to look for the intruder. As he did so, he saw the face of a man peering in.”

As their eyes made contact, the man outside raised a revolver and fired.

The bullet passed just above the boy’s head although the NZ Herald noted darkly that “had he been somewhat taller, as tall, for instance as his father, he must inevitably have been shot.”

“And he goes around the house firing into a number of its many windows,” says Mark Derby.

Eight shots were fired into the Russell home, but remarkably, nobody was injured. Two days later a handwritten note was shoved under the door of Thomas Russell’s law office:

Accumulating wealth at Expense of and by defrauding the humbler classes

Making bad use of wealth and position

Wife haughty and proud to those she ought to help

Torture at every opportunity

But to the enormous relief of the city, Cyrus Haley was caught by Inspector Broham just a few days later.

Police found guns at his home which matched those used to shoot at Russell’s home as well as other evidence linking Haley to the fire at the kerosene store. There was also damning evidence that proved he had sent the threatening note to Thomas Russell’s workplace.

“The letter is written on the back of a larger sheet of paper with other writing on it,” explains Mark Derby. “That larger sheet is torn in half, he writes the note on one half and slips it under the door [of Russell’s office]. The other matching half of that sheet is discovered at [Cyrus Haley’s] house.”

Having initially claimed innocence, Haley changed his plea to guilty on all counts halfway through the trial. He was convicted of arson, attempted murder, and threatening to kill and received three life sentences with hard labour.

DEATH OF AN ARSONIST

Cyrus Haley was considered so dangerous that he couldn’t be held at the wooden Auckland jail known as “The Stockade” (which sat on the same site as the today’s Mount Eden prison). Instead he was sent to the more secure Dunedin Jail which had been built from stone during the Otago gold rush.

Haley’s wife and children went back to the UK after his sentencing but returned to New Zealand three years later to live in Dunedin. But the Haley family’s troubles weren’t over.

“It does appear that [Emily Haley’s] drinking problem had deteriorated … and she was not really capable of looking after her children,” Mark Derby says.

The two children were sent to an industrial school, a forerunner of borstal where young criminals and the children of criminals were expected to work for a living until they reached adulthood.

“It was certainly a huge blow to the pride of somebody like Haley who saw himself as a gentleman,” says Mark Derby.

Cyrus snapped. He began planning to escape from prison and rescue his children.

On October 4th, 1875 he stripped off his prison pants and fled from a working gang near the Octagon in Dunedin. The warders shouted after him to stop but he kept running.

One warder raised his rifle and fired a warning shot. His second whizzed past Haley’s head, and the third struck home. Cyrus Haley, the notorious fire raiser of Auckland, was shot dead.

Listen to the full Black Sheep podcast to hear more about Cyrus Haley’s early life blackmailing a superior officer while serving with the British Army in India and to hear why he may have had a vendetta against Thomas Russell.