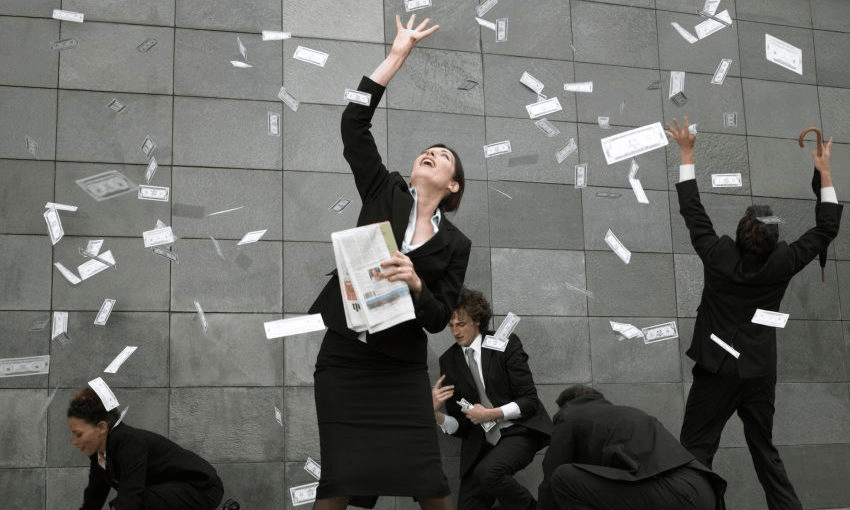 These people will be pissed when they find out it is not real money. Photo: Getty

Happy Rich List day, especially to the teachers and underpaid women of NZ

These people will be pissed when they find out it is not real money. Photo: Getty

Today is the day the National Business Review’s Rich List is announced. By coincidence it’s also the day the latest stats come out that show our updated gender pay imbalance, as well as the day that primary teachers strike.

So while a small group of New Zealanders is waiting with baited breath to see who’s up and who’s down in the pantheon of our super-rich, another group – one that forms the majority of Kiwis – will be watching with a far more resigned eye to find out just how much they will be underpaid this year.

These numbers, one focused on our rich listers and the other on Kiwi women’s pay packets, share one thing: they are both the result of decisions we make about our economy.

It’s not some accident that women in New Zealand are underpaid. Nor that a select few hold such a huge percentage of our national wealth. These are the results of decisions. Decisions made by governments and by voters. Decisions that are affected by influence and power.

When teachers strike for an education system that values, attracts and retains teachers and principals, or nurses strike for safe staffing, that’s also influence and power. Like most New Zealanders I have more time for people pushing to look after our kids and our health system than those pushing to look after their quarterly returns. But I’m also aware that the field is strongly tilted away from fairness to women and toward the wealthy and influential few.

That seems out of whack in an egalitarian country like ours. But watch what happens today – I’m betting we see as many column inches, and as much airtime given to an announcement about a wealthy handful as is given to the fifty one percent of Kiwis who are women. I hope I’m wrong but I’m not expecting to be.

What really worries me about that is the way this unbalanced worldview finds its way into policy-making. When the NBR pump the profile of a few family fortunes, we reinforce the idea that those are the “important” people we should pay attention to. That they’re people who should be listened to. Sometimes, perhaps. But not at the expense of listening to the rest of us.

That’s something Winston Peters understood when he ushered in a new government with a mandate to find the “human face” of capitalism. And it’s what Jacinda Ardern told thousands of us on parliament’s lawn after she was sworn in – this was a government that would stand with us.

New Zealand wanted a change, we still want a change. We want political decisions to be made for equality, for women, for children, for tangata whenua and for those struggling, not for the NBR rich list, or whoever the business lobby groups are wailing on behalf of at the moment. We want a government that will stand with all of us against “business confidence” tricks and stand-over lobbying. We want a government that ordinary Kiwis have confidence in.

There are decisions that need to be made to bring back a New Zealand that is for all of us, not just the privileged few. Among the most important of these decisions we need are pay equity legislation to ensure women are not discriminated against, and Fair Pay Agreements to ensure we stop competing by cutting working people’s wages. We need a just transition to ensure that nobody is left behind as we move to to a carbon neutral economy. And to future-proof our country, we need a decent tax base to look after our aging population and our children too.

These are the concrete, tangible, things that will put the human face back on New Zealand’s capitalism, and they are the things this government was elected to achieve.

When the Rich List comes out today, no doubt at a glitzy event in Auckland, I’ll be in the South Island with teachers standing up for an education system we can all be proud of. And I’ll be saying that our job as Kiwis who care is to stand together to make sure we get the change we deserve.