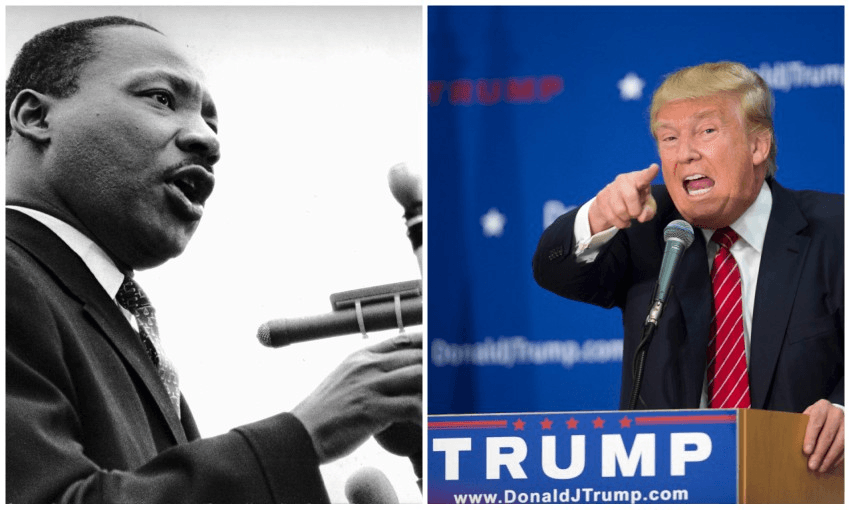 Martin Luther King delivers his ‘I have a dream’ speech at the Lincoln Memorial, 28 August 1963 (left). Donald Trump speaks during his 2016 presidential campaign. (Getty Images)

From Martin Luther King to Donald Trump: how speeches reflect our world

Martin Luther King delivers his ‘I have a dream’ speech at the Lincoln Memorial, 28 August 1963 (left). Donald Trump speaks during his 2016 presidential campaign. (Getty Images)

As America marks one of their greatest orators on Martin Luther King Day, Christine Ammunson looks back on her trip to Georgetown University for the World Speechwriters Conference in October.

As I hopped into an Uber, I reflected on an extraordinary week at the World Speechwriters Conference hearing from writers and strategists who’d served US presidents from Nixon through to Obama. But as Cyndi, my rather awesome driver, wove expertly through Georgetown’s narrow streets, it was she who summed up America.

Above the beat of a Janet Jackson R&B anthem she asked if I was from down south, “ ‘cos you sure look like Atlanta people”. Grinning, I shook my head and was about to tell her I was from way, way down south when she caught my eye in the rearview mirror.

“Girl. Did they all tell you they sold black folk up at that university?”

After exploring the Jesuit colony and campus that was founded before Cook arrived in New Zealand, I knew the church was where John F Kennedy celebrated his last mass and that Bill Clinton and even Ivanka Trump studied there. But no, there was nothing about slavery. I shook my head again. Cyndi smiled grimly as she nodded at me in the mirror.

“Mhm. I knew they wouldn’t be telling ya’ll none a that kinda history. Girl, that’s what I’m talking ‘bout. We don’t talk ‘bout it. We need to talk ‘bout it”

She turned Janet Jackson up and our conversation was over, but as we sped over the Potomac River I couldn’t stop thinking about what she’d just said. Later on, I discovered that Georgetown was beginning to address its history of slavery but it remains a topic that’s not widely publicised.

I’d been invited to speak at the World Speechwriters Conference about the NZ Human Rights Commission’s anti-racism work. Leading professionals who advised presidents, queens, executives and changemakers were in one place for a week and it was unforgettable.

The spectre of President Trump was an uninvited guest at every gathering. Clinton’s speechwriter observed that on rare occasions when Trump delivered a formal, teleprompted speech, it felt a little like a hostage video – he looked uncomfortable and seemed to want to get out of there. It was unclear if he believed what he was saying. As he did with Charlottesville, he typically contradicted himself via Twitter the next day.

A Republican noted that even when Trump keeps to the script he can’t help but bury the script. In his maiden UN speech, Trump said the problem with (almost bankrupt) Venezuela wasn’t that socialism had been poorly implemented but that socialism had been faithfully implemented – but then he attacked North Korean president Kim Jong-Un by calling him “little rocket man”. Any coherency was quickly forgotten. A veteran writer argued that Trump might dominate the news but he didn’t lead it. Instead of a sustained, consistent and disciplined leadership style, he preferred to wing it. What was clear is, close to a year into Trump’s presidency, people from across political divides were still shell-shocked and in various stages of disbelief, fear and anger.

The moralities of making someone like Trump look good was a topic picked over throughout the week. Someone asked if we had a Trump in New Zealand. I replied that like any country, we have those who seek to use hatred or prejudice to get ahead, whether it’s journalists, politicians or Facebook trolls. Whether we helped them or called them out was up to us.

British speechwriter Simon Lancaster unpacked the metaphors of hate, often planted like seeds in opinion pieces, editorials, news reports and headlines. The renaming of a refugee and migrant camp in Calais as the “Calais Jungle” plants the idea that migrants are wild animals in a jungle. Nazi propaganda depicted Jews as “snakes”, the same metaphor Trump used in a speech last year to describe migrants. In Rwanda, Hutu leaders branded Tutsis’ “cockroaches”. The reality is that Trump’s effortless and resounding success at dividing his own people is a symptom of a much bigger, much older problem.

The giant elephant in the room is America’s own history. The United States was built on slavery as well as the genocide and colonisation of its own indigenous people. And yet these gigantic tracts of US history remain topics many find hard to reconcile, let alone accept or talk about out loud. The great America Trump talks about was made possible thanks to free labour and free resources: the very definition of privilege.

We’re not perfect in New Zealand and we don’t always agree. But we’re getting better at looking back at our shared past with open eyes and open minds.

The Crown’s Treaty of Waitangi settlements with iwi are our nation’s truth and reconciliation hearings. We don’t seek to revere or despise everything previous generations did but we do seek to at least understand them. Te Papa Tongarewa’s iwi exhibitions are inherently about human rights, because instead of a government’s ‘vanilla’ version of history, they are an iwi’s story about their own people. For Māori New Zealanders, the settlements represent an acknowledgement of the injustices faced by generations of families, injustice that is still woven throughout our nation’s socio-economic fabric.

Our nation’s history stretches out beyond our borders and these stories need to be shared as well. In 1929, New Zealand police in Samoa machine gunned down several unarmed men on a peaceful independence march and one of them was my nana’s father. In 2002, former PM Helen Clark apologised to the Samoan people for this atrocity. Yet for that apology to be lasting, we need to teach New Zealanders about that part of our history. My great grandad’s tragic death and the following occupation of our village changed our family forever. New Zealanders should know about these chapters in our nation’s past, we shouldn’t just learn in school about the things we’re proud of. Otherwise, we just end up too proud for our own good.

This is the what my Uber driver Cyndi meant when she told me Americans don’t talk about that kind of history. New Zealanders are getting better at talking about our shared history. And we need to make sure we never stop.