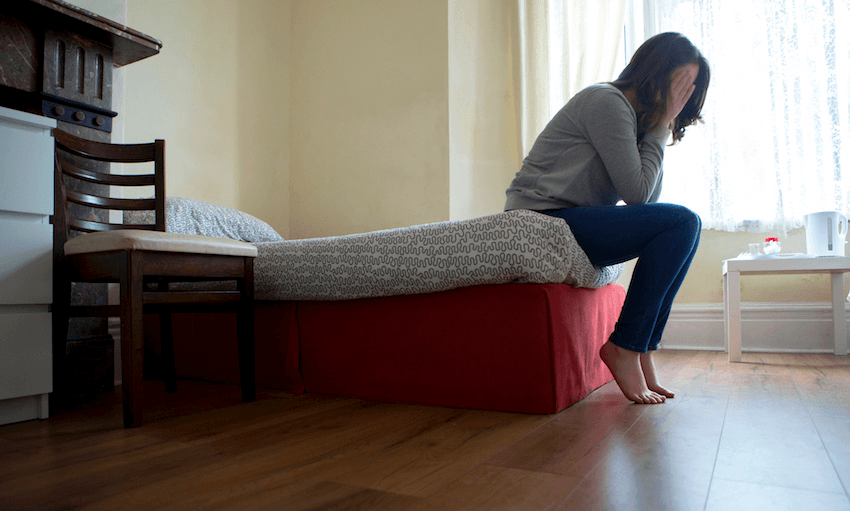 The hell that is renting as a single parent in Wellington

Finding a rental in Wellington isn’t only a battle for students and young professionals. Here, single mothers tell their accommodation search stories, and public policy researcher Dr Jess Berentson-Shaw explains why housing insecurity is so damaging for families.

It is tough when you are a sole parent. I didn’t renew the lease on my small rental of two years as I had finished post-grad study and my two kids desperately wanted their own rooms. I have been looking for a rental since October as my lease was expiring early January, I have good references and no previous renting issues whatsoever. No luck.

Countless viewings and five unsuccessful applications later and we are holidaying/living with family up north, our furniture in storage, trying to hunt from afar and praying I can get back for job interviews.

We are in limbo right now and I am really worried we won’t find anything before my kids start school. I have paid so much for uniforms, laptops and stationery for the new school year but we can’t find a house to come back to.

I can only assume people are offering more money at viewings. The last place I had someone check out, I rang the guy straightaway to ask to apply but it was already rented.

If you look through the TradeMe ads, they are often asking for “professional couples” under ideal tenants. I get the feeling they don’t want kids there. I have rung two 3-bedroom places and explained we are a small family looking to rent and I saw one of them amended their ad afterwards to say “2-bedroom and study” and the other one emailed to say it’s too small for a family.

I have heard solo mums are at the bottom of the desirable tenants heap along with students but I can’t accept a shitty damp place because it could make my kids sick. I wouldn’t care so much if it was just me.

I am now considering houses in suburbs that will hit us in the pocket because of transport costs, as well as asking to view places $100 or more out of my original price range which will mean possibly needing financial help from my family – if they can manage it. I heard the accommodation supplement and/or family support will be increased this year but that will be swallowed up by rent increases now so it won’t make anything easier.

Worst case scenario is we can’t come back to Wellington and I have to upend the life and friends we’ve made in our couple of years here.

From experience, moving a child around can be really tough. My son got really aggro after we kept moving him every six months. Because he was always the new kid and being rejected, he started being really in-your-face to other kids and stuff. Or the places were just terrible, with no choice for kindy, so he’d end up constantly with nits, infected eyes; one place he would come home with bite marks and bruises all the time… it’s just awful. He is so much happier since we stopped moving.

I had one agent say over the phone (when he realised I was a solo mum with three kids) “you can’t apply if you want but I can tell you right now it’s unlikely to be approved as the owner doesn’t want children in the house and it wouldn’t be big enough for you anyway”. The place had been empty for three weeks so they must have needed tenants but they were “very picky” clients he said. I was actually gobsmacked a) that the prejudice existed b) that he was open about it. I felt like a second class citizen alright, solo mum pariah!

Mid 2016, my landlord announced they were selling the house (after an email telling me they weren’t interested in doing any maintenance) and I couldn’t find anywhere I could afford to rent, or a place that would take a solo parent, or a place that wasn’t advertised as “not suitable for children”, so I ended up house sitting – with my six-year-old and a cat.

It was a full year before I could accept that we were homeless for that time. It was so expensive and exhausting moving and putting everything in storage and chasing flats and viewings. I explored all options; we’d been house sharing and I thought we’d have to keep doing that but there are not many people who want to live with a single mother and her primary school kid.

I now rent a one bed flat for me and my son from a friend. The place is wonderful and the bedroom is big so it’s OK, we’ve managed to stay close enough to stay at the same school and I feel very lucky every day, but I also know that it’s probably my last home in Wellington. There’s just no way we can afford to move again, there’s nothing I can afford, and my child is going to want his own room soon enough.

My next move will be out of Wellington which also means away from my kid’s dad. My whole life is here, his whole life is here, but I just can’t see any other future in this rental life. At the end of the week there is just nothing left, more than 45% of my income goes to rent and I’m not even paying “market rates”.

I have lied to landlords on more than on occasion, and I don’t feel the least bit bad about it.

Picture this: You’re viewing a three bedroom suburban home. It has a nice kitchen, thick curtains, and a small backyard. There are so many people viewing this house that you keep bumping into each other. “Sorry,” you say, laughing nervously. You’re all pretending not to judge each other. Is this person more respectable than me? Do they have a better job? A bond that doesn’t require asking a landlord to fill out a Work and Income form?

When you’re a single mother house-hunting in Wellington, the answer is almost certainly “yes”.

That house was the seventeenth property I had gone to see. I had been looking for weeks, and applied for every one I’d seen, no matter the condition – and some were barely livable. Any house is better than no house. I wasn’t offered any. So for the 17th house I had a plan, and my plan was my ex-boyfriend. He agreed to apply for the house with me, though we’d broken up months before.

I paid the rent reliably and took care of the house. But when my last flatmate got busted for drug dealing I decided my son and I needed to live on our own, so we moved to a tiny one bedroom shack. It never got sun and we could hardly move around. That shack was the sixth place my son had lived in and he was five years old.

Now we are in our seventh shared house. We’ve been here for two and a half years and in that time I’ve signed three fixed leases and had four rent increases. My lease is due for renewal in a few weeks and I’m sure the rent will increase again. I’m just glad they haven’t given notice for us to move out. I have no choice but to keep paying more; the rental situation in Wellington is terrifying. The short supply, high prices, and poor conditions mean it’s a landlords’ market. They can choose the cream of the crop for tenants, and no one ever thinks single parents are the cream of the crop.

The hundreds of dollars I spend weekly on rent don’t buy us any security, autonomy, or belonging. But at least we have a roof over our heads.

The best evidence tells us that when kids on low incomes reside in public housing – what in New Zealand is called state housing – there’s a security associated with that. It has really positive effects on employment and engagement with the labour market as an adult, so there’s obviously a kind of childhood impact that is following them through into adulthood. Due to the security of tenure there is less mobility in those households, so the kids aren’t moving from school to school to school and it’s increasing their social cohesion and security. Public housing means kids get to stay in one place which is really good for their education and really good for their sense of security and social cohesion.

There are also community benefits which then rolls on to have benefits in their adult lives. There has actually been data from the Growing Up in NZ study which found that regularly moving house for kids in New Zealand, which is much more common in the rental private market than in public housing, leads to problems accessing social services, education, benefits and healthcare, and it has a really big effect on family support networks and friendships. All of that stuff impacts on a kid’s physical and intellectual development, which of course has roll-on effects as an adult.

Going once, going twice: Wellington landlords want every cent you have

If you’d like to get in touch with The Spinoff to confidentially talk about renting, email don@thespinoff.co.nz