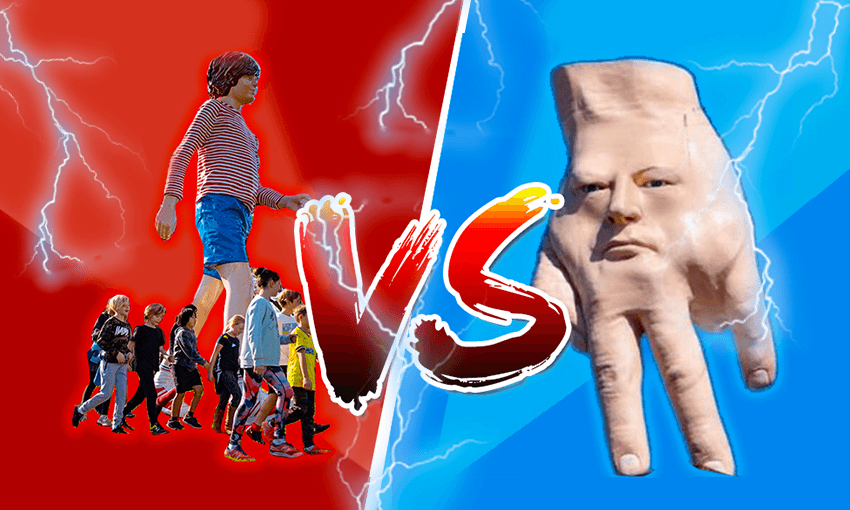 Who would win in a fight: Walking Boy or Quasi the giant hand?

It’s the biggest question in public art: which of these strolling sculptures would smash the other?  Tara Ward plays referee.

Who would win in a fight: Boy Walking or Giant Hand? It’s a question that’s perplexed both scientists and statues for at least a week, and a mystery so consuming I will never rest until we discover the answer. The truth is out there, and it’s hiding behind a massive set of phalanges.

The battle lines have been drawn. In one corner we have Boy Walking, Auckland’s new 5.6m-high, Ronnie van Hout-designed statue of a child “strolling with purpose” into an optimistic future. In the other corner is Quasi, who’s just a hand, standing on top of a building, asking us to love him. Another Ronnie van Hout creation, at 5 metres tall, he’s the biggest hand I’ve ever seen, and you know what they say about men with big hands? Big statues.

Ask anyone in the art world, or indeed, the world in general, and they’ll agree it’s a tricky choice. It’d be easier if they were fighting Ohakune’s giant carrot, because vegetables are wimps, but this is a battle between a fresh-faced behemoth and a ginormous hand that never blinks. Do you side with a perfectly formed but naive human being, or a terrifying body part that sneers at you when you get it wrong? It’s the Sophie’s Choice of the statue world.

But a single fight won’t give us the definitive truth. Was Chris Warner happy with just one wife? Is Simon Bridges full after a solitary slushie? A complex series of life or death challenges is the only way to learn which statue has the superior strategy, strength and fingery force to survive a fight to the death. These sculptures may look like inanimate objects, but beneath their waxy frame lies a silent monster ready to unleash some scary statue whoopass.

The moment I looked into the eyes of Giant Hand, a picture fell off my wall. Coincidence? Unlikely. This is literally the Hand of God, and if you turn it upside down it’s God giving you the fingers. Nobody can out-stare that.

“Phalange”. That’ll be my sick burn the next time I argue with a big hand, and then I’ll sit back to watch the hot flames of ignomy lick each of its fingery nubbins. Alas, Boy Walking is probably too innocent to know any bad words, and too busy with clarinet lessons and Pony Club to think about trash talking a thumb. You snooze, you lose, Boy Walking.

Quasi, however, seems to shimmer with disdain. No doubt it’s an expert verbal shitslinger, and wouldn’t hesitate to pick a fight with a kid. Shame on you, Phalangeface.

Boy Walking, hands down. Looks harmless enough, but has arms.

I was ready to bet my life savings of $8.23 on Boy Walking winning a quick sprint, but then common sense took over. Yes, he’s a boy who can walk and Quasi is just a hand … handing. Yes, those long legs let him move faster than any Girl Walking ever could and, yes, he’ll get paid 9.2% more than she would for it. Boy Walking is racing into the future unencumbered by race or gender, and isn’t that the dream of every young, white male in this PC-mad world?

But Boy Walking is going nowhere. Loser! Giant Hand kicks Boy Walking’s arse, because Giant Hand has fingers that double as legs, so he can gallop along at twice the speed and flip the bird while he’s at it.

He’ll do anything to avoid getting stains on his nice stripy top.

This is tough. Giant Hand would excel at the hand jive, Boy Walking would do a mean hot-step shuffle, and together their interpretive dance skills would be the envy of trout statues throughout the nation. But Boy Walking wins, thanks to a youthful vulnerability that makes him our Manu to The Hand’s tragic twerky Seymour. Take it up with Julz Tocker, I don’t make the rules.