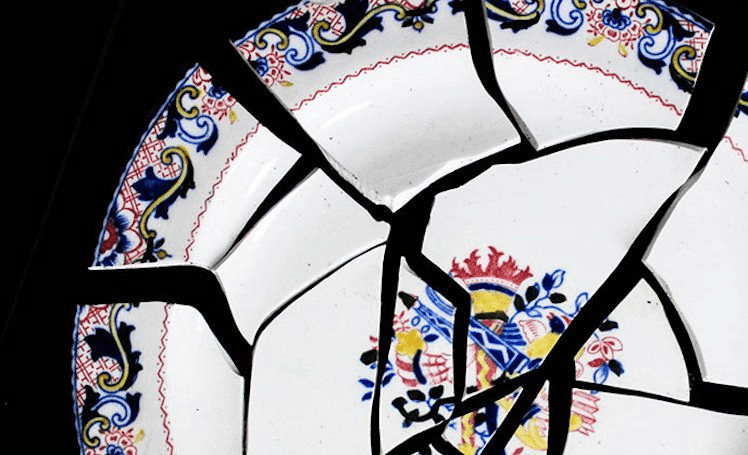 ‘Joining the Pieces’ at Poirirua’s Pātaka Museum is a celebration of resilience, told through artworks created by the women and children survivors of domestic violence. For Jeff Mercer, the show inspired memories of his own abuse, and reflections on how far he’s come.

Content warning: This essay concerns the topic of domestic violence, which may be triggering to survivors.

Grab a plate and throw it on the ground.

Now say sorry to it.

Did it go back to the way it was before?

Now do you understand?

This analogy – symbolic of the fact that an apology, no matter how well-meaning, can’t magically undo a hurt – has been around for a long time, but I’d never seen it before wandering into the Joining the Pieces exhibition put on by Whare Manaaki Porirua Women’s Refuge at Pātaka Museum. It was the first thing I saw on arrival and made a powerful statement, especially for someone who’s been on both sides of that broken plate. I’ve been the assailant wondering why my apology hadn’t immediately remedied my transgressions; I’ve been the victim who still feels broken after even the most heartfelt apology.

So, with this image of a broken plate front of mind, I wandered the collection of artworks put together by the survivors of domestic violence and the people that volunteer their time to help support them. These were evocative, haunting images, both intimate and universal. Such is the nature of family violence.

Children of the Tamariki Programme described “what happens in our bodes when we are angry” by writing and drawing over a life-size outline of a person. “Punch” and “smack” on the hands; “kick” and “stomp” on the feet. From the mouth we get “swear”, “cry”, “vomit”, and “scream”. The “heart beats fast”, “breaving gets heavy”, and “there’s a volcano in my tummy”. These are kids who are far, far too familiar with anger.

Looking at it, I couldn’t help but think about about my own childhood, and the abuse I suffered at the words of my step-father. I thought about how he belittled me, how he called me names, how he hid my favourite toys and told me they’d been stolen. I thought about how I was scared to come home from school each day because I didn’t know if I’d be in trouble, or for what.

Kayla Kirby’s Alone in the Dark showed a girl trapped in a seemingly endless blackness, with only her reflection for company and the only light coming through a door ajar far in the background. “For many years, I experienced sexual and psychological abuse. I felt alone and had no help… I was 16 years old when I came out to my parents and never felt more alone.”

Margaret Little’s Dom Post I and II comprises newspaper clippings taken over a month, each depicting “an instance of violence to, and/or control of women and children”, showcasing the way women are framed as passive objects even in stories that are about them. “Priest stole girls’ faith,” reads one prominent headline. “Man grabs 10-year-old on her way to school,” reports another. “Disaster fuels child sex trade.” “Are women-only flats illegal?” “Killer’s mother: I’m to blame.” And so it goes, women denied agency in their own stories.

I thought about how I swore I’d “never be that kind of man”, and how, as an adult, I found myself setting off down that same path. I thought about the people I’d hurt, and how I’d patted myself on the back for “fixing the problem before it got any worse and had any real impact”, and about how then I turned around and hurt people some more.

I thought about my wife, whom I love more than anything and who loves me just the same. I thought about how I’d never willfully do anything to upset her, and how that intent can’t stop a plate from hitting the ground. I thought about my ever-present fear that this cycle of abuse will rear its head. That I’ll disappoint her; that I’ll hurt her.

The thing about a broken plate is that it can be repaired. The pieces can be glued back together, and the plate can still be beautiful and functional. The cracks will always be there, no matter how well they’re hidden — the damage can never be undone — but with the support of the people working to put it back together, it can find a new lease on life.

“I designed these three pieces around the notion that even though we can be broken, we have a resilience and and the ability to carry on to be positive, beautiful and whole people,” wrote the artist behind a trio of necklaces with porcelain pendants that had been broken and glued back together. “I left the glue on the joins in clear view to represent the fact that we need not be ashamed of our past, struggles or flaws but rather wear them proudly as a valuable part of the people we become as we move through our lives.”

In This is Me III, the children of the Tamariki Programme compared the past’s “fighting, abuse, angry feeling, crying, sad” with the present: “Happier, no fighting, kind, friends, no abusive behaviour.” They know that they have rights: to be safe, to laugh, to be loved, to feel happy. They know that a family should be happy, and they know what a happy family looks like.

Angelique Monaghan’s Forged in Fire showed a statuesque woman rising from the flames like a phoenix. Once again, the cracks were on full display, but this powerful woman was no less strong and no less whole because of them.

I was reminded of my wife, who is the rock that I lean upon, who inspires me every day to be the best person that I can be, the best man that I can be. My wife, who leans upon me and depends on me, and who I could never let down.

Heart Harbour, by Robyn Wall, showed an abstracted landscape. In the foreground was a tranquil harbour surrounded by green hills with words like “healing”, “peace”, “strength”, “love”, and courage”. But in the background, waiting just beyond the horizon, was a blood-red sky with “hate”, “abuse”, “shame”, “pain”, “hurt”, and the like amidst its ominous clouds.

The Joining the Pieces exhibition is at Pātaka museum in Porirua until Sunday, 21 August.