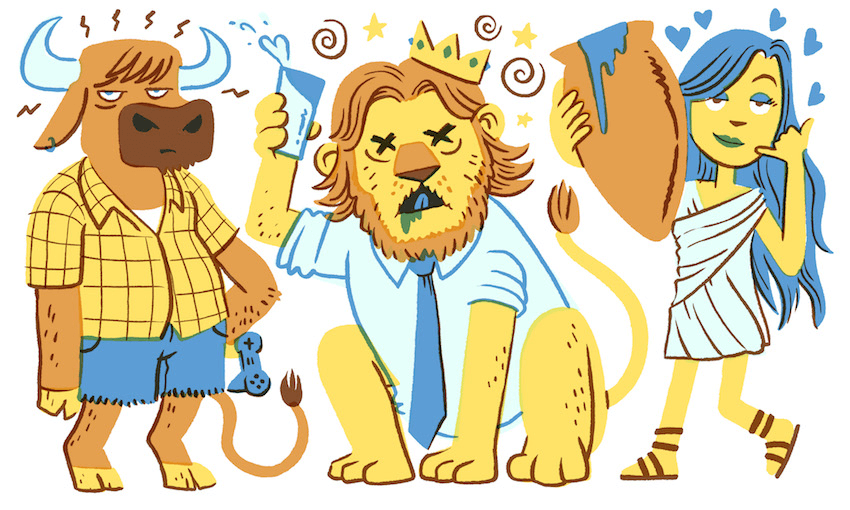 Your marvellous year ahead: The Spinoff’s exclusive 2018 horoscope

It’s been a clusterfuck of a year for nearly all of us, and the sooner we say adios to 2017 the better. But what about next year? Our special guest astrologer has been examining your charts.

Life is definitely moving at pace for all signs now that you have shifted through the road blocks of last year’s unusual moon cycles. But there are big changes ahead for many signs of the zodiac. Use our very specific Spinoff sun sign predictions to guide you through the areas of health, romance, travel, finance and career.

Health: Don’t do that juice cleanse in September with the woman you met at the mindfulness conference in Rotorua. You won’t tap into the powerful vibrational mainframe of the universe, you’ll just end up malnourished and hallucinating.

Romance: Don’t. Seriously, you are terrible at small talk. Sagittarius said dating you was like being beaten to death by a pocket edition of Rumi poetry – and it took just as long.

Career: When Kerry from accounts comes in on Tuesday (see Leo) don’t call him an alcoholic. He is but you can’t do it legally. But if you organised an educational talk by the police where everyone did a spontaneous breath test for lols… You feel me?

Travel: Featured strongly this year because you have had relationships with everybody in Auckland who is not in prison or long term medical care. Meeting new people would be good for you in 2018 so if travel isn’t possible look into retraining for a career in Corrections. You would definitely be suspended for malpractice if you practiced medicine.

Health: Use a condom with that French guy you’re casually following/stalking to Rhythm and Vines.

Friendship: Stop asking Sagittarius to borrow his car. You know he’s only saying yes because he thinks you might follow through with a hand job.

Romance: Use your words. Go on. You can do it. Stop stalking Capricorn on Facebook and ask her out. She is terrible at small talk but she always has a fully stocked first aid kit and has surprising upper body strength which you will appreciate when you (SPOILER! Health:) break your leg in May doing the Tongariro Crossing. Don’t piss her off though. She is vaguely murdery. Like, not full blown, but she’s got it in her for sure.

Romance: You are going to meet someone online. Leave them there. (See: Gemini). Look, it happens to heaps of people, don’t cry.

Health: He wasn’t lying, you do have nice boobs.

This is going to be a big year for you. Your mum is going to insist you move out. I know that’s difficult and scary but you are 32 and we both believe in you. Yes, we did notice you folded the washing last week. Thank you. No, you still have to move out.

Romance: Stop scamming that nice Aries woman from Oamaru and pay your auntie some rent you little shit.

Fitness: And stop telling people you tried out for the Junior Warriors but didn’t like the “toxic masculinity of the game”. You went to one match, ate three sausages in the carpark and felt breathless walking up the stands.

Career: That “no caller ID” number is WINZ. The moon in Saturn says you are toast but your auntie has a friend who is a lawyer and accepts payments in cash. Yes, you need a lawyer, not three hours reading a subreddit on ‘fightin da man’.

Career & health: Replying ‘new phone who dis?’ to your mother’s “Happy New Year” text will be simultaneously the funniest and stupidest thing you will do all year.

Finances: Seriously, you will never stop paying for it.

Health: Stop drinking straight vodka at work/home and pretending it’s water. Everybody knows. Also the fact you don’t throw some ice in with it is just fucking gauche.

Career: Sober up before that meeting with HR later this week and you might still get a redundancy pay out. We can’t promise anything. Put some pictures of your kids prominently on your desk now though.

Family: Good news, looks like your 32 year old son (see Taurus) will finally go flatting when his mother cracks it. So that’s something isn’t it?

Family: Your nephew is scamming a nice woman from Oamaru when he is at the Titirangi Library taking back your Murder She Wrote DVDs. He told her he is from the Maldives and because she has never been north of Kaikoura she doesn’t know he’s sexting her from the Non Fiction reading corner which has an impressive vista of new growth kauri. She has never seen a kauri.

Career: He is also one of only 3.5 people in NZ who have managed to commit significant benefit fraud. It’s actually impressive and he should explore his talents in the tech and identity theft areas.

Hot tip: Pay for him to do a course in app development and make sure you are a majority share holder in his start up.

Finances: Change your PIN immediately. He knows it.

Romance: You’re continuing to avoid your feelings like a champ I see. Carry on.

Health: Try washing it off before you ask a doctor about it.

Romance: Don’t return those texts from Aquarius. She just wants to borrow your station wagon to get to Rhythm and Vines because she met a hot backpacker from France at Wynard Quarter last night.

Finances: She won’t tell you this until she is 36 hours overdue returning it. It will smell disconcertingly of both soy and dairy products for the next six months but especially on the hot days. Don’t listen to your sister about using the baby wipes to try and get rid of the smell because that will make it worse.

You will try to sell it on Trade Me to a family who have recently arrived from South Africa but you will be overwhelmed by guilt when they tell you how lucky you are to have grown up in Glen Eden.